I have a book with several bread recipes that call for 1-2 tablespoons of powdered milk. This isn't something I usually use and I was thinking substituting it with normal milk, and putting less water to compensate for the added liquid. Would this be ok? And if yes, how much milk should I put for one tablespoon of powdered milk?

A general reconstitution of milk with dried powder is 1/4 dry milk and 1 cup water to reconstitute milk. So 2 tablespoons is 1/8 cup to 1/2 cup of water.

If you want to replace 2 tablespoons, replace 1/2 cup water with milk. 1 Tablespoon is 1/4 cup milk instead of water.

I have done this as a replacement for dried milk in bread many times with success.

Yes, you can. I use the King Arthur Flour Small Pain de Mie recipe all the time http://www.kingarthurflour.com/recipes/a-smaller-pain-de-mie-recipe, which calls for non-fat powdered milk. An answer to another question here Why is milk powder used in bread machine recipes? says to scald the milk, a concept reiterated by the folks at King Arthur. So as an experiment, I made two loaves of bread, identical in every way except that in one I substituted 170 ml scalded skim milk for the powdered milk and that volume of water. 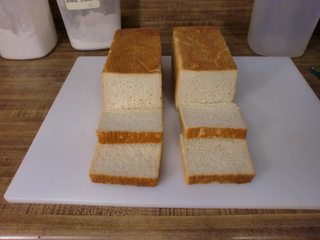 Right out of the oven and three days later, I can find no difference between the two loaves of bread.

My package of powdered milk calls for 7 ounces of water to 1/3 cup powder to make 1 cup of milk, so I figured 8 tsp powder + 7 Tbs water = 1/2 cup milk. I converted to metric just to make the math easier, but it doesn't seem to me to require that much precision.

One thing to add to the answers mentioned before: if you leave the ingredients in a bread machine overnight, then powdered milk is better as it doesn't go sour.

Yes, you can substitute as already answered, but you can also just leave it out! I've found it makes no noticeable difference.

Just leave it out - least in those quantities. We make bread in a bread maker with and without it, and anecdotally adding it tends to make for softer, less chewy bread, especially if its a recipe with some sort of fat in it.

0
Substitute wet milk for dry milk
0
Can I use whole milk instead of powdered milk?

12
When adding vital wheat gluten to a bread recipe, should one reduce the amount of flour equal to it?
6
Dry milk in bread: purpose, and substitutions
6
Cajeta with powdered goat's milk? Or evaporated?
3
Why isn't my bread machine making any bread?
7
Dutch oven bread - bottom always burns
17
Why does my home-made bread go mouldy?
5
Which types of bread are well suited for overnight proofing and what adjustments are needed?
2
The Perfect Smoothie - Liquid Milk versus Powdered Milk
0
Why are my tangzhong bread doughs so wet?
5
What is the milk in Bratwurst for?