I brine my chicken and use only salt, pepper and garlic powder in bleached flour to taste. I think this comes close to the Colonel's. Can anyone taste other spices in the original recipe?

It's possible that the breading/spice mixture has been revealed, according to an article in the Chicago Tribune. They also provide a full recipe here, though as far as I can tell, the solid part is the spice mixture, and they're filling in the rest of the recipe.

They say it seems to be a good match... with the addition of MSG:

But more important, did it taste like the Colonel’s secret blend of herbs and spices? It came very close, yet something was still missing. That’s when a reporter grabbed a small container of the MSG flavor-enhancer Accent (how did that get in the test kitchen?) and sprinkled it on a piece of the fried chicken. That did the trick. Our chicken was virtually indistinguishable from the batch bought at KFC. (Does KFC add MSG? A KFC spokesperson confirms that it does use it in the Original Recipe chicken.)

The full story: a nephew of Colonel Sanders spoke with a reporter and showed him a recipe he claimed was the original recipe, then later downplayed it:

"That is the original 11 herbs and spices that were supposed to be so secretive," he says with conviction.

(In a subsequent phone interview with a Tribune editor, Ledington dialed back his certainty and expressed reluctance about sharing a recipe that — if it's legit — ranks among corporate America's most closely guarded secrets. "It could be; I don't know for sure," he said about the handwritten list of ingredients, adding that this was the first time he'd shown it to a reporter. "I've only had that album for four years, since my sister passed away.")

KFC's official responses were of a "neither confirm nor deny" flavor, so it's pretty hard to say if this is real or not, but it certainly could be. The clearest they said was:

"Lots of people through the years have claimed to discover or figure out the secret recipe, but no one's ever been right." 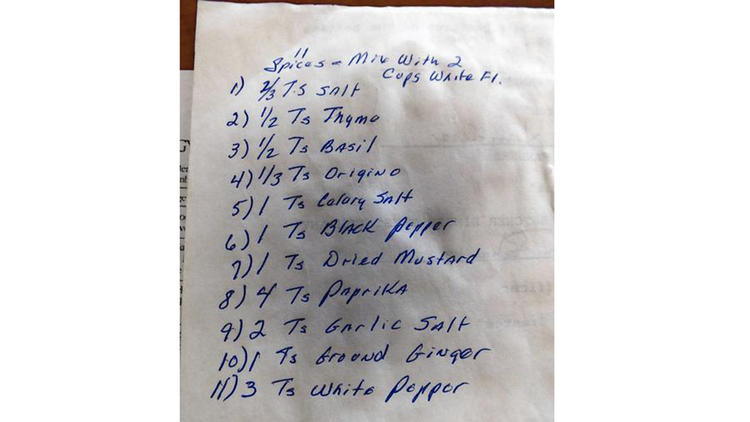 Most of the other spices are difficult to impossible to detect. I've gotten as far as paprika, onion powder and rosemary for sure. I think there is parsley powder involved as well. There is another couple that I'm close to identifying, but no luck yet.

I want to learn what to put together, too, because I love KFC but my body can't handle it, so I want to learn how to make the coating for my own foods.

Here is a recipe, referenced by @Jefromi, as it was printed in the article by Joe Gray in The Chicago Tribune on August 23, 2016 (which I've not tested):


Mix the flour in a bowl with all the herbs and spices; set aside. Mix the buttermilk and egg together in a separate bowl until combined. Soak the chicken in the buttermilk mixture at room temperature, 20-30 minutes. Remove chicken from the buttermilk, allowing excess to drip off. Dip the chicken pieces in the herb-spice-flour mixture to coat all sides, shaking off excess. Allow to sit on a rack over a baking sheet, 20 minutes.

Meanwhile, heat about 3 inches of the oil in a large Dutch oven (or similar heavy pot with high sides) over medium-high heat to 350 degrees. (Use a deep-frying thermometer to check the temperature.) When temperature is reached, lower the heat to medium to maintain it at 350. Fry 3 or 4 pieces at a time, being careful not to crowd the pot. Fry until medium golden brown, turning once, 15-18 minutes. Transfer chicken pieces to a baking sheet covered with paper towels. Allow the oil to return to temperature before adding more chicken. Repeat with remaining chicken.