Can one always cook food faster in a pan with water in it with the lid on and/or high heat?

Your question is a little odd: you first ask about two things to do with cooking in water, then you ask about browning, which never happens when cooking in water no matter how hard you try. You need higher temperatures than the 100C you can reach in boiling water.

There's sort of an exception: if food sticks to the bottom of the pot when boiling, or if the liquid is pretty thick (like a thick sauce), it can burn on the bottom. This is pretty easy to do if you're not stirring - the bottom of the pot gets well over 100C without water directly in contact with it - but that's usually more of a way to ruin your food.

So I don't really know what to say about the "how can both be true" question - boiling faster with the lid on has nothing to do with browning. The former is about the speed of adding heat, and the latter is about the actual temperature. They're just two completely different things.

As for the question in the title, the answer is... sort of. High heat and putting the lid on both will let you reach a boil faster, which means a shorter total cooking time since you're spending less time at lower temperatures. And they also both make it easier to make sure the whole pot is boiling. But once you reach that point, no, adding extra heat or putting the lid on won't make things go any faster.

But you might be down in that "not quite all boiling" range more often than you think. This Food Lab article on boiling has a great photo: 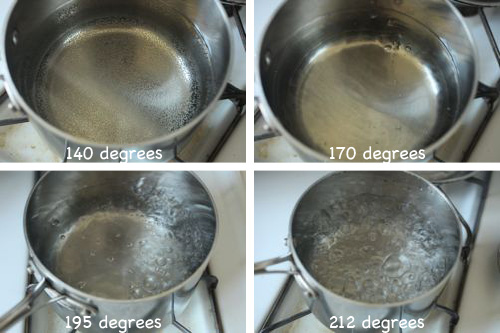 Remember, heat is only being added at the bottom. So the water boils, turning into steam, only at the bottom of the pot. That part is definitely at 100C. For the whole pot to also be at 100C, that heat has to be transferred to the rest of the liquid. With a full, rolling boil, that happens: the water and steam are mixed around, coming to the same temperature throughout. With a simmer or low boil, especially in a deeper pot with more food and less water, or with thicker liquids, it's very easy for that not to be the case. If you have a pot of a thick sauce at a low boil, or a pot with more food than water, with some small bubbles coming up, you might see temperatures perhaps down in the 80-90C range at the top. That does mean somewhat slower cooking! Turning up the heat to get a stronger boil will bring that temperature back up, as will putting on a lid to hold in heat.

To address the second aspect: When the lid is on, there is just too much steam trapped in the vessel, which will interfere with frying/sauteeing, just as it is harder to saute in a really high vessel (say, a stockpot) even without a lid on... Also, depending on the lid material and shape, the steam can condense on the inside and result on water going back either down the vessel walls or straight into the pan.

Whether the lid will speed or slow the cooking, depends on the situation. High heat will only sometimes speed the cooking!

The crucial knowledge to understand and apply is that boiling water doesn't get any hotter than 100˚C. Because of this, high heat won't cook already-boiling-hot food faster!

SE (Stack Exchange) encourages folks to answer their own question – share their knowledge, Q&A-style and I was particularly motivated to do so because the reality is that things do NOT cook significantly faster at a rolling boil, and it addresses a pet peeve of mine: folks who leave food at a rolling boil, uncovered, for a long time. The rolling will stir food, which would tend to very slightly increase cooking speed, and the stirring could keep pasta from sticking, for example, but generally, it's wasteful.

**except in extraordinary situations - like in a pressure cooker or minor exceptions, like the slightly different temperatures very salted or super-critical water boil at or other abnormal pressure situations. Since cold water sinks, any water below 100˚C will sink to the bottom of the pan where it will heat up.

***Note: by simmer, I mean keep at the boiling point, in other words, at a very low boil. I think that's a meaning most people consider reasonable. However, there's no unanimity on the meaning of simmer! Some folks define it as a temperature in a range significantly below the boiling point

Not the answer you're looking for? Browse other questions tagged boiling or ask your own question.

33
What does “bring to a simmer” mean?
17
Does water boil faster with the lid on?
4
If the recipe says simmer beans for 3 hours, can I just turn up the heat and cook faster?

15
Can I boil milk unattended (and still keep the pan clean)?
16
(How) can I prevent pasta water from boiling over with the lid closed?
17
Does water boil faster with the lid on?
13
Boiling Chicken Breast (or any meat) before cooking to cook evenly
3
How long does it actually take to extract tea compounds from leaves using the boiling method?
0
Why should one boil water over medium-high heat for pasta?
13
Technique for peeling boiled potatoes
13
Why does oil transfer heat to food more gradually than water?