I tried making Emeril's quiche lorraine this evening. Made the dough using the ingredients specified (including 7 tablespoons of butter), but forgot to freeze the crust after putting it in the tart pan. It went straight to baking.

My crust while baking became exceedingly greasy... downright inedible! There were pools of butter forming in my oven since butter seeped through the cracks in the pan, and my oven started to smoke. I took the crust out of the oven at the indicated time, and it was really moist looking. When I pressed my finger into the crust, all this grease surfaced (yuck).

Question: Is the greasy dough due to me having forgotten to refrigerate the pie crust for 30 minutes, or could there have been another reason for this grease-fest?

Any guidance is greatly appreciated. I struggle with crusts... this is just another fiasco in a long line of fiascos!

Thanks in advance for your help!

I don't know what it is, but I can tell you it is neither the ratio nor the temperature.

I needed dinner anyway, so I made a small experiment. I made half a batch of crust using the ratios from your recipe, and baked it in three small tartalette pans. I used butter so soft that I had to spoon it out, I couldn't cut it (it sits on the counter as a rule). The water was also room temperature, it had been sitting for 1-2 hours in the filter jug.

For the first tartalette, I placed a small ball in the middle of the pan and pressed it outwards with the fingers. Beside giving it a worse-looking shape, this made sure I had no additional flour sticking to the surface. I didn't roll it between sheets of foil, because it was too sticky for that. While I am probably more experienced at crust baking than you are (but by no means an expert), I purposefully disregarded the usual advice just to exclude the possibility that you missed something of it.

The second and third one, I rolled in sufficient flour to not stick, so the surface had quite a bit more flour, which I figure could bind excess butter.

Then I baked number 1 and 2 straight from the counter, as-is. No preheating the oven, no docking with a fork, no filling in weights or beans. The third went into the open ice compartment of the fridge, which hovers about 0 Celsius (but isn't cold enough to keep ice in a plastic box from melting). I baked that one after a bit over 90 minutes, by that time the oven was cold again. The crust was solid. 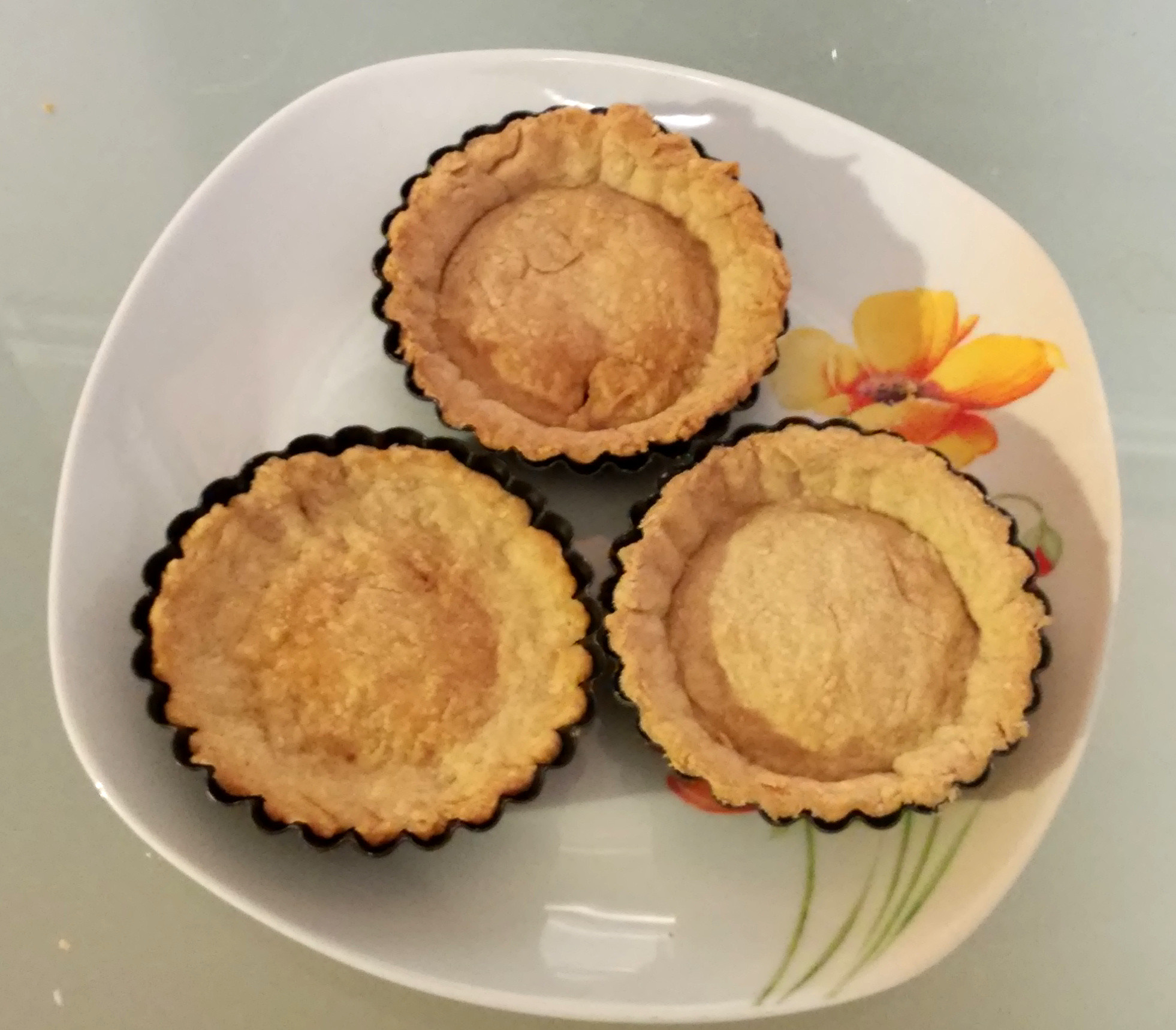 The left lower one is the "press with fingers" crust. The lower right one is the one which got floured and baked immediately. The upper one spent time in the fridge. The foto is not perfect, but I can tell you that none is greasy, and none has pooled butter. 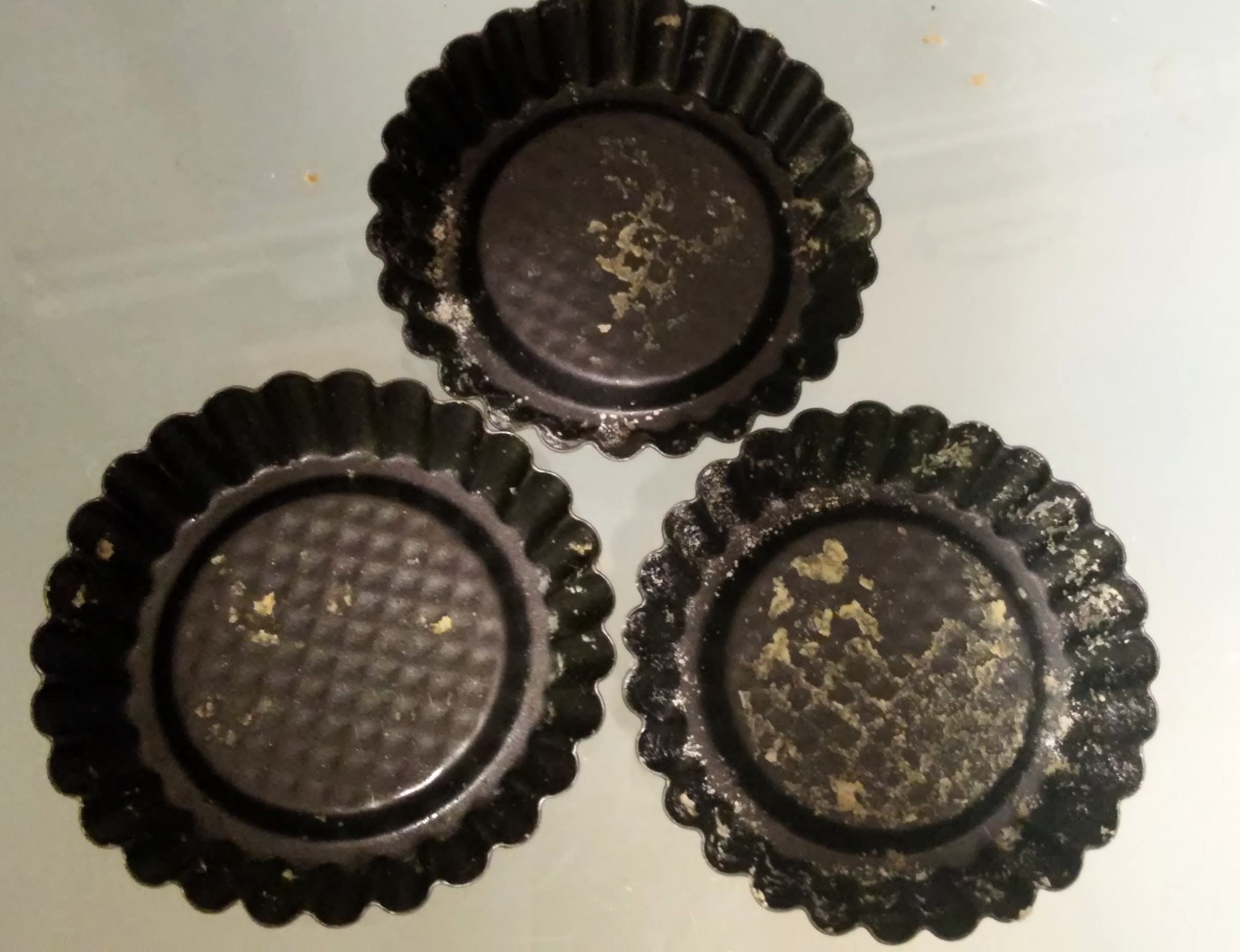 This is another phone camera picture, this time of the unwashed pans directly after removal of the crust. None of them contained a visible pool of butter, although it was obvious all three have been in touch with fat. The constellation is the same as in the above picture. The lighter stuff you are seeing is flour, not chafed teflon.

The only difference I saw was that the non-floured one had some obvious tiny (pinhead sized) bubbles of fat while baking. Nothing large enough to drip, and it did not look unpleasantly greasy in the oven or afterwards.

The crusts are crisp and nice, nothing moist or soft or greasy about them. (Using "greasy" as perceived fat content here, because of course they are full of butter, and an experienced cook can tell it).

My conclusion, whatever happened, it was not the fault of the recipe, neither was it the "didn't cool" part. If it was due to too much butter, you must have also mismeasured something by a significant amount.

I just did a rough conversion of the flour:butter ratio and found 1.5:1 (by weight) which does not match the standard pâte brisée ratio of 2:1.

It is quite possible that your flour couldn't "hold" the fat, leading to the effects you described. Refrigeration will reduce the effect, but if the total amount is too high, you will still get a greasy result.

As a first correction, you should aim for around four tablespoons of butter for your cup of flour1 or increase the flour to 1 3/4 to 2 cups.

Many bakers here (even those from the US) will agree with me that for baking, which can be like chemistry in it's need for precision sometimes, weight measurements are better than volumetric measurements, so consider using a kitchen scale.

1 Assuming 120g per cup, this may vary depending on your method - dipped vs. spooned, sifted or not.

If you used a gluten free flour like almond flour it would be greasy, I tried to make gluten free biscuits for my daughter using almond flour and they came out like greasy pancakes. The flavor was fine but much too greasy.

My first hypothesis was that because you didn't freeze the pie crust right before you put it into the oven, the butter melted before the rest of the crust was able to take shape. Then again, the grease problem would still be around, because as soon as you break apart the crust you're going to get what was formerly crystals of fat running down your fingers.

Coming from another question about fat here... What is the purpose of oil or butter in bread? The purpose of the butter is to create a crispy crust that doesn't become elastic in the oven. Therefore the recipe you're using really, really wants to limit the amount of elasticity in your dough.

I suggest that to make the dough less greasy, you're going to have to work in the butter a lot better than you did here. That's all that I can think of for now, but I hope it helps!

18
What is the purpose of oil or butter in bread?

2
When Making A Pie With Graham Cracker Crust, How Can I Get The Crust Just Moist Enough?
4
How to make a lattice pie crust?
4
Frozen store-bought pie crust
2
Pie Crust -- Cutting to mix
0
How to save failed pie crust dough (warm butter)?
1
Pie Crust Partially Cooked
3
Pumpkin pie in a crust that requires a shorter cooking time
1
having problem with chicken pot pie crust
0
Why is my lemon pie crust so wet?
0
Can I substitute sambucca in my pie crust instead of vodka?