How to get heat high enough for stir fry?

Considering that mounting a fighter jet afterburner in my kitchen (or anything, for that matter) isn't very convenient or realistic, what would be a realistic way to get the extreme heat output that stir frying requires?

I have heard of people using small gas burners, while these are a step in the right direction, they don't seem to have quite the required output.

I've also heard of people using a charcoal barbecue and putting the wok directly on top of the coals. This seems better, but at the cost of convenience.

Is there a way to replicate professional kitchen's high heat output at home?

I have never tried it but when I googled wok burners (thinking to find a standalone high-output gas hob), I found this article about a wok ring called the "WokMon" on Serious Eats and had to post it here:

A couple months ago I was approached by Glen Lee, an inventor who claimed to have an ingenious new device for cooking in a wok at home. Seemed to me that if it worked the way he promised, it would to revolutionize home wok cooking in the same way that the Baking Steel revolutionized home pizza-making.

I played around with it a lot, measuring, tinkering, reporting a few issues (it's still in development phase and has kinks to work out—luckily Glen has been extremely receptive to feedback), and generally cooking up a storm. I'm happy to report that this thing solves a problem I've been trying to work around for over a decade.

It's called the WokMon, and it's like steroids for your gas burner, helping to concentrate your flames and, more importantly, put them under the center of your wok, where they're supposed to be.

It looks like it does exactly what you need but is way cheaper than buying a specialized heat source and doesn't require more equipment.

Unfortunately, they're not quite in production yet, it seems, though you can pre-order them on their site.

Here's an action photo of the flame it produces off a standard gas stove: 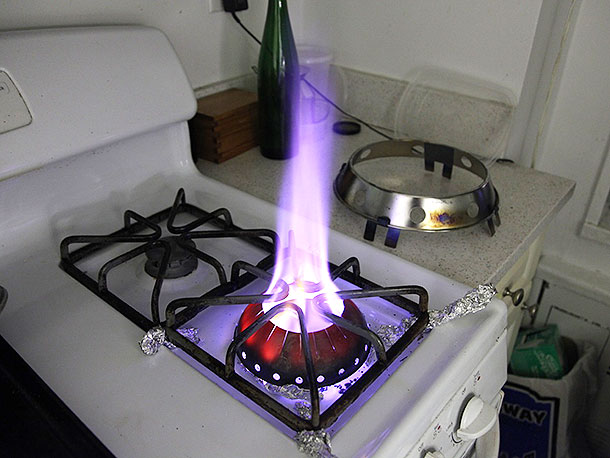 Not the answer you're looking for? Browse other questions tagged equipment heat stir-fry or ask your own question.

1
Stir fry sauce quantity
8
How can I prepare left over Stir Fry for the fridge?
3
Need help choosing burner for wok
3
Stir-fry pan choices
2
Using beef jerky cuts for stir fry?
1
How to make less salty Fermented Black Bean Stir Fry
5
How to stir fry frozen veggies?
4
Is it okay for oil to smoke in stir-fry?
0
When do you add bok choy when cooking stir fry
1
How do I make stir-fry sauces that don't get watery and thin as leftovers?