I recently saw a recipe that called for Turkish Bay Leaves. Is this any different than the kind I would find in a standard spice bottle labeled "Bay Leaves", or is this a form of exotic marketing? Are there even different types of Bay Leaves?

Are there even different types of Bay Leaves?

There is the California Bay Laurel Umbellularia californica.

We have an California Bay Laurel (AKA Oregon Myrtle) growing in our yard. While looking the same and smelling like normal store bought bay leafs like from Spice Island, it is 10 times more pungent. I used it once and that was the last time.

According to The Spice House:

The flavor of these Turkish bay leaves is far milder and more complex than that of domestic bay; it adds a subtly sweet astringency to dishes. Only one or two are needed to enhance a whole roast, pot of soup or stew.

I consider them "normal"; they're the oval-shaped bay leaves. There's a "California" bay leaf variety that has elongated leaves and a slightly different flavor. 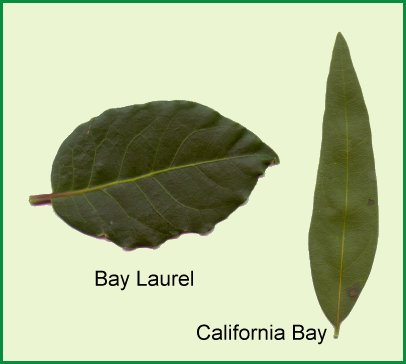 So there are two plants which are called "bay leaves"; the Turkish Bay Laurel (Laurus Nobilis) and the California Bay Laurel (Umbellularia californica), as other answers have noted. What's "normal" honestly depends on where you live and what kind of recipe you're making.

If you buy dried "bay leaves", what you get is going to depend on sourcing; you're best reading the label. The two species are largely interchangeable in most recipes, which makes life easier, with one exception: if you specifically need fresh bay leaves, go Turkish. California bay leaves are less flavorful when fresh, and have a waxy texture.

Figured I'd check the site of the brand I use. Turns out they are Turkish:

The bay tree is native to the Mediterranean region and Asia Minor. The bay or laurel tree grows well in the subtropics and is cultivated today as a spice in the Far East as well as the Canary Islands, France, Belgium, Mexico, Central America and Turkey (where McCormick's bay leaves are grown).

Not the answer you're looking for? Browse other questions tagged herbs bay-leaf or ask your own question.

9
"Best by date" true for bay leaves?
12
What can I do with a lot of bay leaves?
18
Are bay leaves dangerous to (unwittingly) eat?
9
How do I cook with bay leaves?
2
In writing a recipe, when should I remove the bay leaves in the process?
11
Is tomato foliage edible?
27
Why are bay leaves used whole and then removed rather than crushed up like other spices?
1
How can I determine how powerful certain herbs and spices are? Is there a list?
3
Are these Bay Leaves?
11
Dried basil leaves instead of bay leaves