Is there a specific name for the mise en place containers used in professional kitchens?

I've recently been watching the PBS show "The Mind of a Chef" and noticed the plastic containers the chefs use to store ingredients as part of their mise en place. To me they seem like a better alternative to other methods such as the custard cups Alton Brown uses which I find clumsy and annoying to use and wash.

The containers are stackable and come with lids and seem relatively sturdy. Seeing as they keeping quite a lot of them at hand, my guess is that they are disposable and / or cheap to acquire.

I've been browsing some online restaurant supply stores, but the only storage containers I could find in similar sizes are quite expensive at around 1.5€ each.

Is there a specific name these containers are sold under? 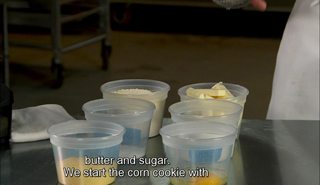 Around here, they're called 'deli containers'. Those are specifically the heavier weight ones that can deal with hot foods. I don't see delis using them much anymore (they've switched to thinner, less expensive ones), but all of the restaurants near me that sell soup as takeout use them.

You might be able to ask your local Chinese restaurants if they'll sell you some -- I can also get lighter weight ones in smaller lots (25) at most of the hispanic & asian grocery stores near me, as many of them have an aisle with goods that people running food trucks would need.

This should be a hint:

...stackable and come with lids and seem relatively sturdy.

If they're relatively sturdy, then they're not really disposable. There's no need for something to be sturdy if you're going to throw it away after one use.

So, look for plastic containers that suit your needs, and reuse them until they break. If they're on the cheap side, they might not last as long as nice food storage containers, but they'll still last quite a while, certainly long enough to make 1.5€ not seem like a big deal.

If you want something not terribly durable but at least a tiny bit reusable, kind of on the borderline of disposable, you might search for to-go containers (I guess they'd be takeaway containers in UK English). They'd be easier to find at restaurant supply stores than consumer stores.

If you really do want cheap and disposable and don't care about lids, just look for plastic bowls. That doesn't seem as useful to me, but I'm sure there are some situations where it might be good, e.g. if you're doing some one-time cooking at a much larger scale than normal.

Those containers look to be about 16 oz to me. If you search for "16 oz disposable containers with lids" you should find what you are looking for.

I found these on Amazon UK, which cost about £10 for 50. They are microwaveable and dishwasher safe, so can be reused.

The plastic containers you depict are easily obtainable as to-go containers at restaurant supply stores. They are known as plastic to-go bowls or containers.

In many kitchens, certain staple items are a source of both the item, and its container for re-use. Don't know if that's what's going on in the pictured kitchen, but it certainly goes on at the one professional kitchen I have some regular inside contact with. Sour cream tubs, mozzerella ball buckets, fish boxes all get re-used (after cleaning and sanitizing, of course) pretty much until they break, or perhaps a little sooner if the incoming supply exceeds the wear-out rate of the ones in use.

...and indeed, my local Chinese take-out packs its soup in pretty heavy #5 plastic (polypropylene - hot is OK) clear containers, which get re-used in my home kitchen.

Cheap is good, but free via re-use and diversion from the waste stream is better (or getting more of your money's worth from the money you spent to buy the stuff in the container.)

Just found these: https://freundcontainer.com/plastic-square-snap-lock-containers-w-tamper-evident-lid/ took me awhile, but I prefer these to traditonal round deli quart/pint containers. No wasted space when placed side-by-side, they also stack more securely without flopping around. Hopefully this helps somebody looking for the same thing.

I'm no expert, but a quick search led to this online store. It seems you are looking for DuraHome Food Storage Containers with Lids.

Personally, I prefer square containers. This Stainless Yakumi Pan looks fenomenal, but it's a tad expensive.

Other brands offer other options. I saw Ziploc round containers with a screw-on lid.

Gastronorm containers are ubiquitous in the professional kitchen.

Not the answer you're looking for? Browse other questions tagged storage restaurant containers or ask your own question.

3
Do you know of any good rectangular spice storage solutions?
3
Can you buy plastic food containers like “Tupperware” in specific or custom dimensions?