Looking for a rice cooker, steamer, deep fryer, slow cooker combo that can cook rice and steam at the same time

I know this is slightly crazy, but I am a minimalist.

I try to get by on as little "stuff" as possible.

Basically I want a rice cooker that can steam my vegetables and chicken for a meal all at the same time, and it would be nice if the same appliance could be a deep fryer the few times I need one or a slow cooker.

I say you have two options:

I think you will have difficulty in finding one that will also deep fry.

I have a 4 in 1 electric cooker that does rice (with a vegetable steaming insert), porridge (it has a seperate button for this), slow cooking and steaming - no deep frying though.

Based on my recent experience I can recommend at least for your short-list (or as an addition given the comments above which seem to suggest you can get all in one except the deep-fry part), the Tefal Actifry.

Replaces a deep-fat fryer and can do most of the things you can do in an oven and stove-top, and when frying it uses only the amount of oil that's left on the food at the end (i.e. about a tablespoon to do say a kilo of chips).

But also does quite a lot besides the obvious chips and meaty things like hot-wings and sausages; some examples posted here: http://www.lakeland.co.uk/L?content=noticeboard/recipes/actifry.htm (stews, curries, fried rice etc)

Some reviews have posted concerns about reliability (clips break, fans burn out), which are supposedly fixed in more recent iterations of the design (users reporting that replacement lids have thicker clips; 'Which' a consumer group in the UK has a response from Tefal saying they've fixed the fan issue..), but to guarantee I had one of the newer models I went for the only-recently introduced 'Family' version which also has 1.5x the capacity of the original model. No issues so far, but I've only had it a few weeks..

Overall got it probably mainly as I just generally have a weakness for gadgets, but it's proved a great/very versatile addition to my tiny corner-of-the-studio-flat kitchen and my friends are loving the chips it makes :) And when cooking just for myself I also really like the way you can set the timer and go watch TV while it does its thing..

You could be interested to the Presto® Kitchen Kettle™ multi-cooker/steamer.

The Deni Multi Fryer is a combo cooker / fryer / deep fryer / slow cooker / rice cooker / steamer all in one. You will love it I do.

Yes, there is something like a slow cooker which will double as a steamer and a deep fryer, as well as cook rice. NOT all at once, obviously, but a really good quality, heavy-bottomed large stainless steel pan + lid + a steamer inset + a rice ball like this: 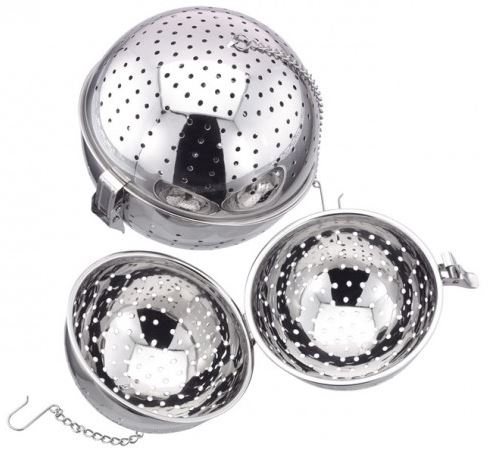 should fulfil all your requirements without too many gadgets or "stuff" cluttering your kitchen and/or your life. This combination also can be used on any type of stove top. It is important the base is thick, so the heat distribution is even. I used an old pressure cooker with a rice ball and stainless steel cullender for years. This combination takes "one-pan cooking" to a new level.

I have this rice cooker, although it's branded "National", not "Panasonic". It has a perforated platform that you can put in after the rice and water, and it sits about an inch above the bottom of the pot. Perfect for steaming salmon filets. It's not a deep fryer nor a slow cooker.

Not the answer you're looking for? Browse other questions tagged equipment rice slow-cooking deep-frying steaming or ask your own question.

18
What types of cooking are pressure cookers most useful for?
7
How to cook a pot roast without it tasting like vegetables
3
How can I adapt rice cooker steamed fish to cooking in a pot?
5
Why is it that every time I steam vegetables while cooking rice my rice cooker ruins the rice?
2
can a crock pot go bad?
3
Increasing time on slow cooker recipes
1
Optimal cooking tool for long-duration steaming
6
What am I doing wrong with my rice cooker?
2
How can I achieve the equivalent of “Slow Cook High” setting on my multicooker?
2
How can I make regular rice more sticky?