Please note: I don't believe this question is a dupe. There is this question, which has some excellent answers, but they are suggestions that don't apply to my situation because I have ruined my cast iron oven differently than the user who asked that question.

So last month I got a massive 16" cast iron dutch oven from Cabelas. I seasoned it by cooking it in a campfire for a few hours (w/ lid on), letting it cool, and then rubbing a little bit of olive oil into it. Last week I took it for a test drive and cooked some peach cobbler on it (again over campfire), and it was perfect. I cleaned it by boiling water in it for an hour, scraping off the crust with a wooden spoon, and then reapplying the olive oil to it.

Last night I decided to cook a pork shoulder roast inside of it. The instructions said to let it cook at 325°F for 3 hours. Since I'm still so new to campfire dutch oven cooking, I got a roaring fire going, and unloaded like 30 charcoal brickets into it and let them heat up. Definitely was blazing too hot, but I didn't know any better. (Subsequently since last night I discovered that there are actually formulas that correlate specific numbers of brickets and their locations with specific temperatures. In hindsight I think my oven was soewhere around 450°F.)

I put the oven on the fire (with the pork inside of it, and about 1/4" of apple cider vinegar resting underneath it). 90 minutes later I went to check on it and the pork was totally charred black and overcooked. So it was pizza for dinner! But, to my horror, the apple cider vinegar-herb-seasoning liquid had now turned into black carbonic rock in the bottom of the oven: 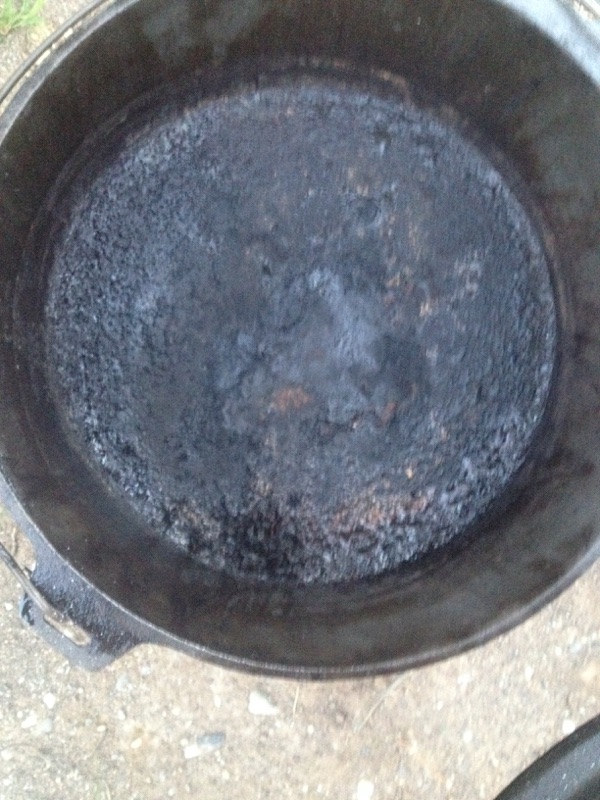 Under the lid was a buildup of a super thick tarry sludge that has the consistency of superglue.

I tried washing both the oven and lid with salt water (course grained). Very little came off. I tried boiling the oven over the same campfire for a few hours, and again, practically nothing came off. I went to the Google gods, and the best idea I was able to find was to soak both the lid and the oven in a 50/50 mixture of water + vinegar overnight. So I did that.

The oven remains unchanged, even after soaking in a vinegar solution for nearly 10 hours: 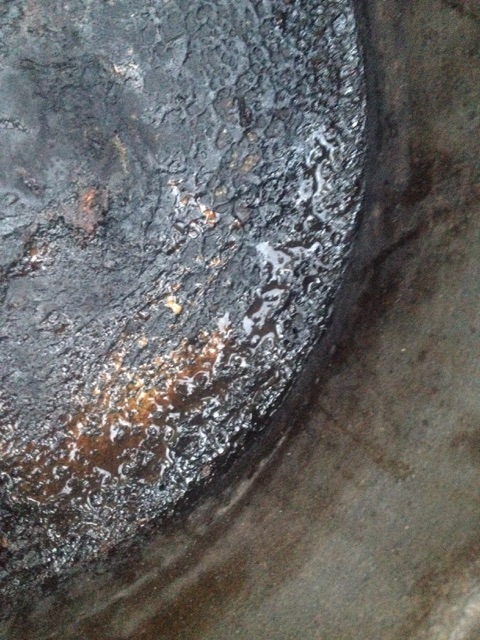 As for the lid, all of the surficial tar/sludge came off, but it is still super sticky to the touch, unlike it was before. And now there is almost a 'metal vapor' that its giving off.

What the heck happened here? Did I just cook at too high a temperature? Are you not supposed to cook apple cider vinegar in a dutch oven over the campfire? Much, much more importantly, how can I fix this and restore the oven to its full glory again?

Simply put you nuked your food. The temperature got too high too quickly and the moisture in the pot boiled off faster than it could be replaced by the meat, and then all the fat and juice plus the meat in contact with the pot's surface got charred on. Fat from the meat got stuck all around the pot and adhered, and the heat was intense enough to blacken the surface of the meat. It sounds like temperatures were far higher than 450F.

The good news is that there's probably nothing wrong with your dutch oven that you can't fix with some steel wool and good old fashioned elbow grease. The blackened stuff at the bottom is simply charred meat, I don't imagine the metal underneath is damaged, so scour it clean and re-season it. The lid got covered with lots of fat which has yet to come off which is why it's sticky, lots of dishwashing liquid and more scouring should fix that too. Personally I've never had any luck with boiling or baking char off pots and pans.

My own experience with dutch ovens is that they work better if you have heat coming from all around rather than just at the bottom. If you only have bottom heat it has to be more intense to heat the whole thing, and as campfires are not an exact science it's easy to accidentally char the bottom. Having less intense heat on the bottom and putting a shovelful of coals on the lid gives a nice even heat.

Not the answer you're looking for? Browse other questions tagged cast-iron dutch-oven fire or ask your own question.

12
How to clean a burnt cast iron pot?
5
How did rust appear on my cast iron in a matter of minutes?
2
Have I over- or under-cleaned my cast iron dutch oven?

10
Cast Aluminum Vs Cast iron Dutch Oven
3
Did I just almost start an oil fire?
2
Have I over- or under-cleaned my cast iron dutch oven?
5
How did rust appear on my cast iron in a matter of minutes?
1
Lodge Dutch Oven seasoning fail (My first cast iron experience)
4
Fighting flash rust on cast iron pans
0
Cast iron pan rusts during seasoning
5
What accounts for Dutch Oven price variation?
6
browning meat in Dutch oven--why doesn't it work for me?