Can this tool be used to open cans?

Target has a tool called can opener. 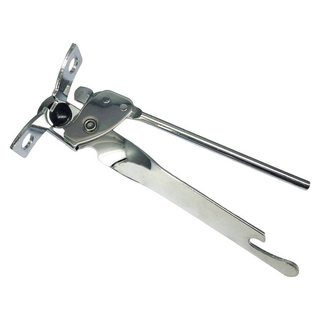 Can it be used for opening vegetable cans, tuna cans, ..., which don't have pulls on their tops?

How can it be used?

I asked because I only used a can opener that looks different to the one above, and looks like this one. 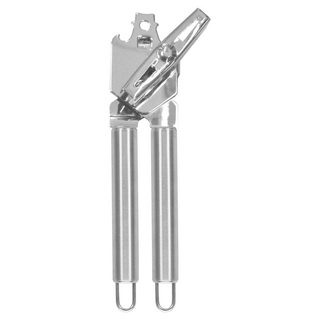 Those two versions of a can opener operate on exactly the same principle. The difference is that the simpler one has a cutting "blade" that's basically just a part of the main body that's been bent at right angles and maybe sharpened a little bit, while the nicer one has an actual separate circular blade.1 Both will serve the purpose of opening cans, but the simpler one will probably need more physical effort expended.

1I think - it's actually hard to tell, given that the picture is from the least useful angle imaginable.

There are many ways to open a can. Marti is correct that those two operate on basically the same principle, and yes, of course the can opener opens a can, whether or not it looks like one you know.

You can use a screwdriver or (preferably, it's sharper) chisel. I have actually done this to "can-open" a barrel. Just hammer the chisel around the rim (inside, after initially piercing the top.)

There are the minimalist can openers from army rations, and the ones on folding knives.

Also the ones with a "confusing sharp part on a bottle opener/corkscrew" which operate on a similar principle. 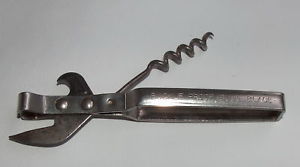 There are the fancy new ones that cut through the seal sideways, leaving "no sharp edge and a lid that can be put back on the can" at least for cans of the right size seal (I've found ones they don't work on - which you can't tell for certain until the lid does not come off.)

There are videos out there of all of them in use (ah, what founts of knowledge the internet is reduced to bringing.)

This looks like a copy of an old, old style of can opener once called a "miracle can opener" (google it). Similar in use to modern ones, might require more accuracy and physical strength to use.

3
Is there really such a thing as a muffin scoop?
2
Why does my kamado ceramic grill fall out of it's stand when I open it?
57
How do I wash the "pokey" side of a box grater?
1
Optimal type of wine bottle opener?
12
What is this odd tool used for?
1
How do I clean a refrigerator with no removable shelves?
5
Which utensil or device can be used to make spirals or conveyor screws with vegetables?