How can I easily get water to a desired temperature?

I have a number of teas, some of which require a lower temperature for steeping than others (for instance, I have a particular Green Tea which asks for steeping at 70°C, 158°F).

I was wondering how to get the water to this temperature, and I can think of 4 different methods:

Is there any difference in the result of those methods, as to the quality of the tea it'll end up producing? Will it make a difference if the water (or some of it) never reached the boiling point?

The method we use (for coffee) is pretty simple (though it requires some compatible equipment):

If you don't have a kettle or your thermometer won't work, you can do the same thing with any pot and a thermometer that has a clip (so you don't have to hold it for 10 minutes while the water heats)... but be sure the thermometer is heat safe (candy thermometers are good for this if they have a high enough temp range).

You'll want to keep a couple of things in mind...

The temperature of your mug will cool the water when it makes contact. This is unlikely to make a huge difference but it's something to think about. If you really want to brew your tea at exactly 70 C, consider heating sufficient water to "warm" your cup (or teapot) by filling it part way and swishing the water around to heat up the cup first and then pour the water down the drain. Alternately, you can heat your water to a slightly higher temperature (72 C).

As to your other methods... I'm sure any of them would work just fine... they'd take longer, though, because you're waiting for something to boil and then you're waiting for it to cool off or you're futzing around with getting it back down to the "right" temperature by adding cool water or tossing it back and forth between cups.

Provided you have standard, municipal water that you're comfortable drinking from the tap (or filtered), I don't know why boiling it first would matter.

I'm also skeptical about the pickiness of tea being steeped at exactly 70 C. I have a feeling that there'd be little discernible difference (to the average consumer) were the water at 80 C or even 90 C... It'd be an interesting thing to test, I suppose.

As this relates to oxygen loss due to boiling, which has been mentioned in some of the answers. This related question actually discusses that already and the general consensus is that lower oxygen levels in the water is actually bad for the taste of the tea:

Dissolved oxygen is reactive, and will most likely extract more substances from the tea leaf, than without it. If these are the good flavour parts of tea, I do not know?

This person found that increased oxygen in the water resulted in milder, less tannic tea.

So, it sounds as if not bringing your water to a full boil is actually preferable to the flavor of the tea (assuming you don't like the tannic flavors) because the oxygen is beneficial to the brewing process.

For baking a rapid-bake loaf in my breadmaker a fairly precise temperature is required (enough to get the heat going quickly, not enough to kill it). This is easiest to obtain by mixing hotter-than-required water with cold water, stirring using a thermometer. If your cold water temperature is stable you can get really rather close by known proportions of boiling and cold. This may be good enough for you. But of course don't mix it over the tea (or yeast).

Boiling water reduces the amount of dissolve oxygen, and this will affect the taste of the tea. So boiling then cooling will result in different water than just heating to 70C.

I don't think methods 3 or 4 will result in a taste difference, just a time to get there difference.

The simplest way is to 1/3 fill the cup with cold water (from the tap/faucet), then fill with boiling water.

It really is that simple. The difference in oxygen content will be negligible, as 70% of the water is still being boiled, and the other 30% is oxygenated by the act of pouring water into it.

Boil and wait to cool is extra time and energy.

This is a trick I use with wine. I have old thick milk bottles I leave in the freezer. Then I just pour warm wine in the bottle.

However, pouring boiling water into untempered glass such as a milk bottle is likely to shatter it.

Use a thick metal vessel you leave in the fridge. Let water get to temp or higher. Pour into like a small cast iron tea pot at room temp or fridge temp. Hopefully it over-cools and just keep adding hot water until is gets up to temp. You could steep in the cast iron tea pot. It would also hold the temperature. 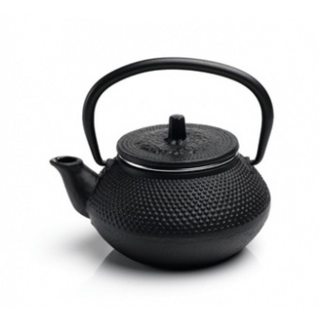 On the comments on O₂ and CO₂ it is going to lose gas just heating. Gas is less soluble at high temp and solid is more soluble temp. It take very little time at that temp.

I have a kettle (Breville) with buttons on it that heats water to different temperatures.

12
What chemical processes occur in tea that spoil it after some time?
6
Black tea water: Does boiling water first make a difference?
1
Can I boil water to temperature lower than 100 Celsius / 212 Fahrenheit to make a tea?
6
Loose-leaf tea: specifics of re-steeping multiple times?
6
Black tea develops cloudy dregs; how to avoid?
3
How long does it actually take to extract tea compounds from leaves using the boiling method?
6
Can I add milk to tea while it is steeping?
4
Is it practical to boil drinking water in a pressure cooker?
6
Should I consider water temperature in kettle or in cup to infuse my tea?
38
Does water “go bad” in this sense?