I am looking for a fast way to peal Parkia speciosa, (as known as Petai, Bitter Bean, Stinky Bean, Sator).

We are processing thousand rows of petai every day. We need to find more efficient ways to do our job.

Our goal is to peel the beans out of it's skin and it's inner skin. The bean should come out clean without cutting it through.

The following video shows the current technique we are using.
See video: https://youtu.be/3F7TfAdMYiU?list=PLHHnWHMetsOqJArvQK9FjAsnCGCKuWs0h

Petai has a thick outer skin with rows of beans within. The petai bean are it's seeds which are coated with an soft inner skin (also known as testa or seed coat)

[Picture of] Parkia speciosa (from Wikipedia) - shows the fruit as it was picked from the tree, with some of it's bean has been peeled off clean and some are still intact with it's soft inner skin. 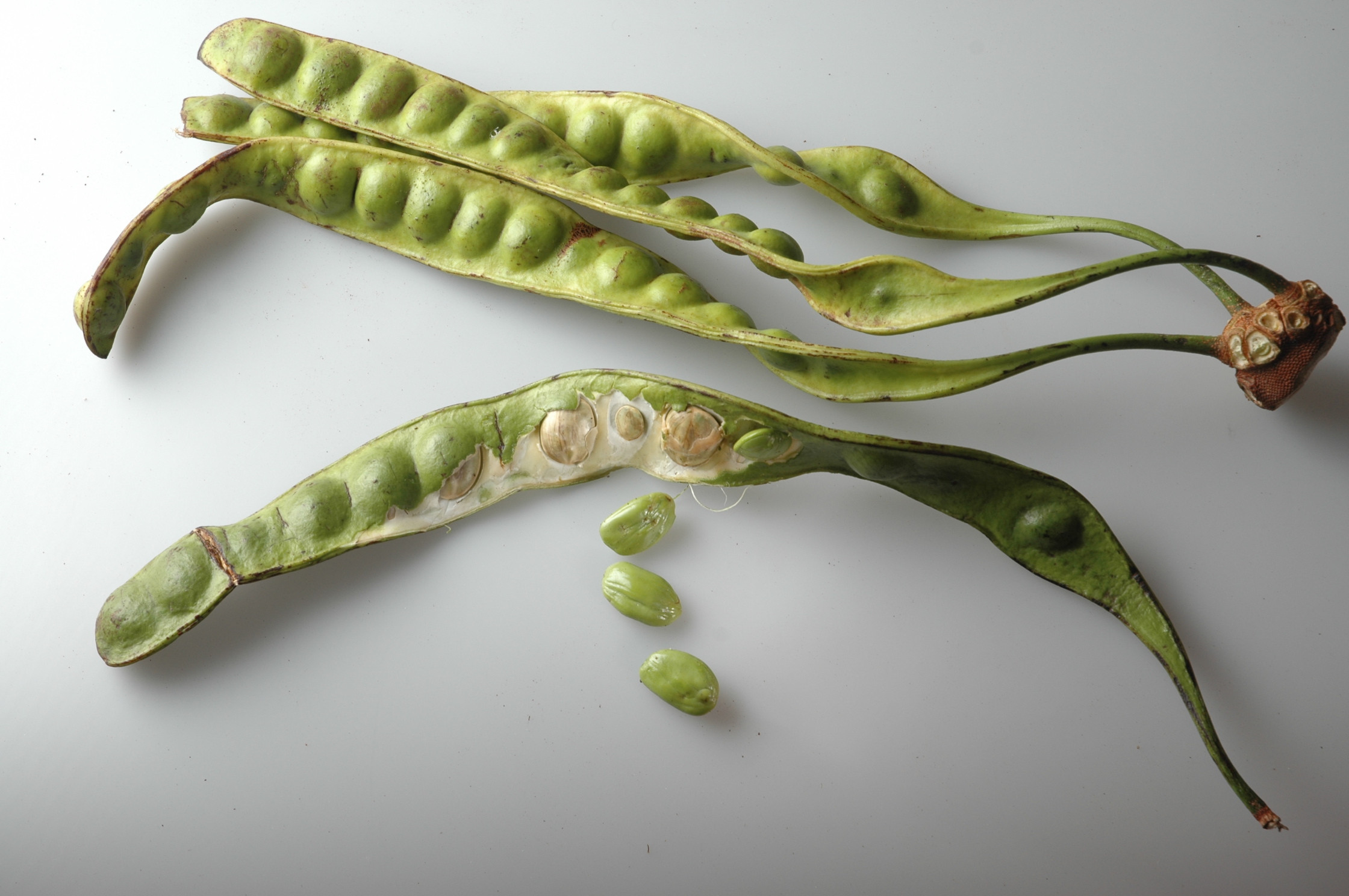 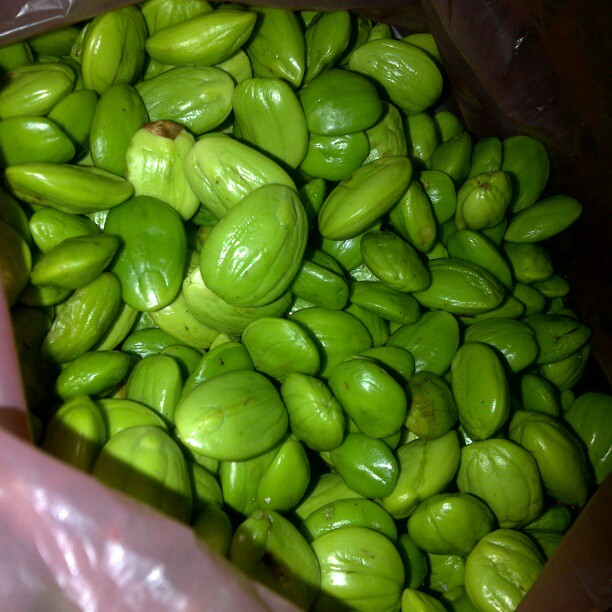 Do not cut through 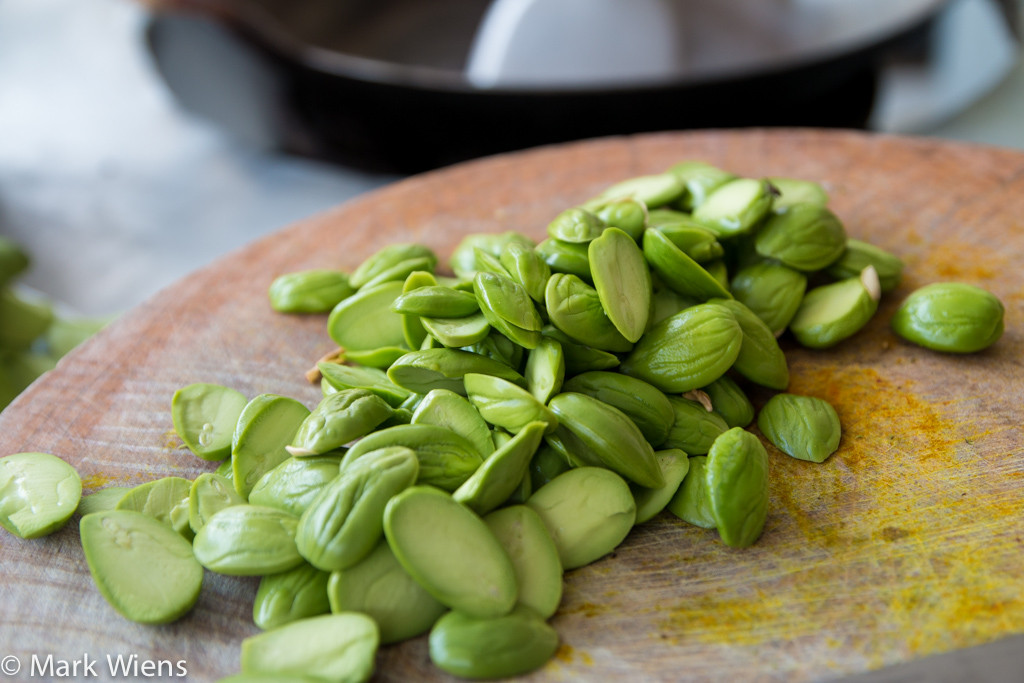 I have tried searching for any technique, devices, or machine but could not find any better way than what we are doing now.

I wish someone had an answer with the best solution to this.

While I don't have a tried answer, I had some speculative thoughts that I hope might be useful. You may have already looked into these possibilities, or they might not work, which case obviously they won't be helpful... but I thought I might offer them because it seems to me like like they might work.

Have you tried slicing off the long edges of the pod, as close to the beans as you can? It looks like the pod is attached between the beans, so the pod won't pop open like peas - but if it can be pried or pulled open, it might let you take the whole pod's worth of beans at once. Even if not, it might make pulling the bean from the pod a lot easier if you don't have to pull it free from the sides. The downside is that it would be easy to nip ends of the beans, especially if they don't line up neatly in the pod - you might consider cutting sections at a time, rather than the whole pod at once.

This would be much easier if you had a guillotine style cutter, which should let you make straight cuts fairly easily and with minimum effort. I was thinking something like the one below, although you might want one specialized for kitchen use rather than paper. 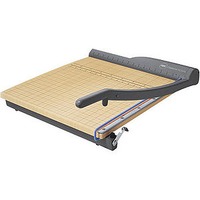 Alternatively, if you can cut both the long sides off the pod - then if you slice off each bean, ideally so the bean shows through on three edges minimum, you might be able to remove the beans from the square of the pod by putting them in a rotating drum. The squares would rub against each other, and over time pry the pod edges apart and let the bean loose, and let the beans rub the inner skin off against each other. You should separate loose beans and chaff periodically, so that the beans aren't damaged by over-grinding them. While this should work for most beans per batch, if there are any leftover beans that really won't shake loose, they can be dealt with manually at nearly the same efficiency you already have. 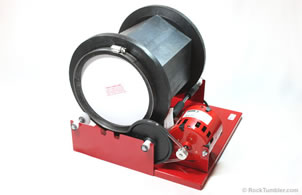 I don't know how long it would take to do a single batch, it might depend on the beans and pods, how closely they're cut, how big and how full the batches are... but it could conceivably do large batches at a time, with minimal supervision - and so be more efficient and easier even if it isn't "fastest". I pulled the idea from the polishing drums used for tumbling rocks, which use grit to wear down the stones - but when researching I found the process is also similar to threshing and winnowing, as is done for grain (like wheat) to lose the inedible husk from the inner grain - the scale is just somewhat different (and dedicated equipment likely to be too specialized, but you can try). Actually, you may get the same effect from commercial mixers (or even regular ones, depending on batch size), since the work is done by the friction between the beans.

Your square cut pods should work tumbling by themselves, since they're light, soft (compared to stone), and have plenty of edges to catch on each other. Your beans be relatively unharmed, because they should be tougher than your pod edges. I suspect it will work better with larger batches, because the weight will give the rubbing enough force to pull the pod apart and shake the bean out. Cutting the pod around the bean on all four sides would let the bean be pulled loose much faster, but it would mean cutting the extra pod out from between each bean. Leaving the extra strip of pod on one side, with the bean showing on three, is probably nearly as good, and takes one cut less per bean, which may add up over large amounts.

Also, you should consider that both methods may produce more damage to the bean (in nipped of edges from straight cuts, and splits are also a possibility when tumbling). It is also possible that there will be beans that need to be processed manually anyway. How cost-effective the processes will actually be for your people will depend on a lot of factors.

Not the answer you're looking for? Browse other questions tagged peeling or ask your own question.

97
How do you peel garlic easily?