What is the purpose of a spaced cross-hatch of grooves on the inside of a cast iron pan?

I have been on a tenacious pan hunt, lately, looking for something that won't leach, degrade, or require me to look up the meaning of any 3 or 4 letter acronyms.

In my search, I found a pan that has a strange cross-hatching to it, like this: 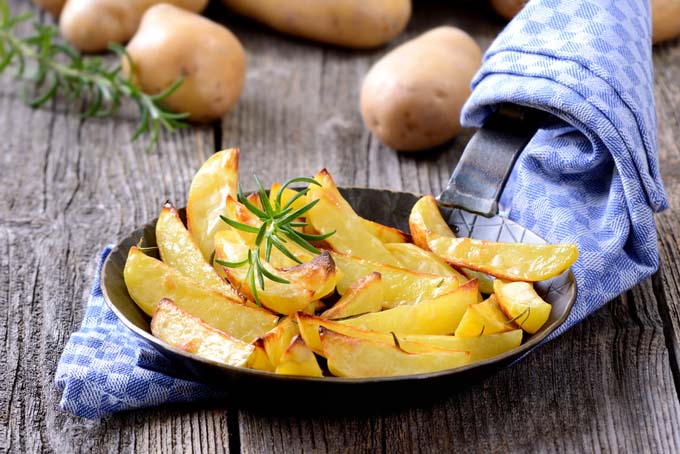 Why would someoen intentionally make their pan harder to clean?

I thought it might be to change the appearance of browned food, but I don't think something so thin would be the only reason for the grooves.

Is this to store seasoning or something?

This kind of pattern seems to be added to a pan to increase its cooking capabilities. This advertisement here suggests that the pattern itself is useful for making "crispy potatoes or a juicy steak", though it doesn't happen to say why the scoring helps, it does mean some people believe it will improve the food cooked in the pan.

It is possible that the lines give some texture to the sides of the pan, letting pieces of food be pushed up on the sides for a while without sliding back down, and so spreading the food out and giving better control over access to direct heat for browning, or letting pieces rest away from direct heat after they're done or until there's room for them. Sort of similar to the theory of cooking in a wok, only not because woks depended on quick hot cooking, so smooth sides and falling back to the center were positives.

It is possible that when dealing with single larger pieces of food, the scoring gives a kind of access to the underside, letting oil or other liquids run underneath (and be wicked up by or rendered off of the food as needed) without disturbing the food before it is finished cooking - especially if there are reasons lifting or flipping shouldn't be done too often, if it needs the uninterrupted cooking time to hold something delicate together or form a crispy crust.

It is also possible that one of the reasons might be the pattern of grill marks or patterns of the scores left on food cooked in it (aesthetics does matter to some people), or that somebody had a theory as to why the score marks let the pan cook better, and so the pan is made whether or not it actually does cook better. It is possible it had to do with visible effort - that this kind of pan was intended as art or display as much as cooking pan, and the extra difficulty cleaning it was secondary to that.

This pan is not cast iron, it is forged iron. As far as I am aware, the grooves are simply a side effect of the manufacturing process in which the iron is "stamped", not intended to have an effect on cooking.

update This site (in German) claims that they are intended to reduce warping when heated, so cooking related after all. For me, they were not effective, as my pan did warp quickly and badly despite having them.

I have such a pan and must say I'm not too happy about it. It is more difficult to season, and the seasoning may wear out unevenly. Also, due to its thinness, it doesn't work as well as standard cast iron. But enumerating all its problems would take us way too far from grooves.

Not the answer you're looking for? Browse other questions tagged cast-iron frying-pan seasoning-pans or ask your own question.