What are the parts of the corn plant?

Supermarkets sell cleaned, prepared cobs of corn. If I pick my corn from the plant, which parts are there, and how are they cleaned?

Corn has husk, silk and kernels. In the middle there is the cob, which only becomes visible after you have eaten the kernels. 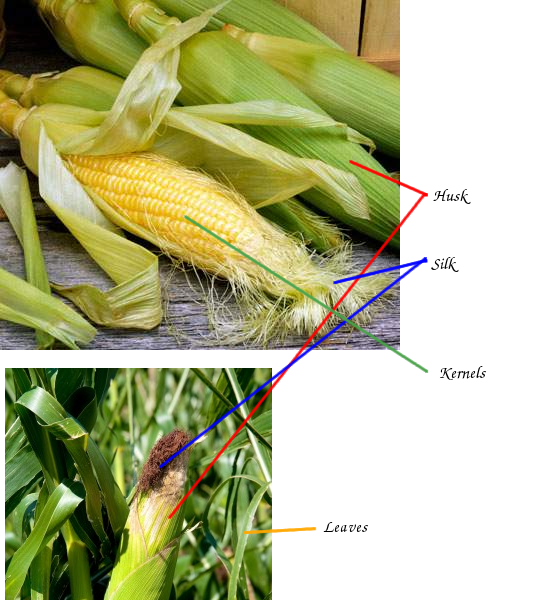 The husk is, botanically speaking, formed of leaves, but it has a different texture from the standard leaves and encloses the cob with the kernels snugly. It can be left on the cob during boiling, or removed before boiling. For grilling and other preparations, remove the husk. It is not edible, historically it was used for crafting. In the kitchen, it can be used for wrapping a tamale, although wider leaflike matter is more convenient, if available (such as banana leaves).

The silk is called that because it looks and feels like silk while young. The silk in ripe corn tends to be sun dried and brittle, at least outside of the "package" of husk. It is not usually eaten. See also Tips for Removing Silk from Corn?.

The kernels are what you want to eat. Most methods call for preparing them while still on the cob. If you need them removed, you can "shave them off" the cob with a sharp knife.

The cob itself is the dry semihard thing in the center. It has no culinary uses.

The leaves are used to feed livestock, but not eaten by humans.

An ear is the name for the whole package you pick off the plant, so the kernels on the cob with their silk and husk.

The stalk is something not generally seen in a kitchen. It is thick and tall, supporting the leaves and the ears.

Not the answer you're looking for? Browse other questions tagged corn peeling or ask your own question.

22
Tips for Removing Silk from Corn?

5
How should I choose corn?
22
Tips for Removing Silk from Corn?
5
Roasting corn in the oven
7
What are the modern or recommended ways of cooking corn on the cob?
7
Is corn a fruit, vegetable, or a nut?
4
Can “cream-style” corn substitute for creamed corn in cornbread?
2
Par-Cooking Corn on the Cob in a Microwave
3
Source for comestible cracked corn
0
Are there any particular type of corn chips that are made from masa flour?
3
Are any corn products in the United States made from nixtamalized corn?