This is not a product request. I was looking to replace a couple baking pans, the 9"x13"x2" that serve many uses, brownies or cakes among them.

Even with the dimensions stated, to be clear, I'm talking about these. I don't know if there is a more specific word for them. 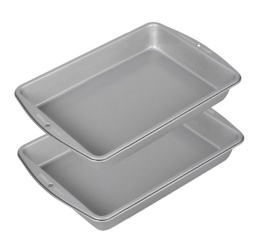 One review for the product I'm likely to buy said "These pans burn everything I bake in them.... They cook too fast. Have to cut bake times in 1/2 from what recipe says and things still burn.... cakes, brownies, even granola...."

Does this even make sense? I've had to change times when I changed ovens or stovetop burners. The complaint here makes no sense to me, and I'm curious if it's something I should take seriously.

This review does not make sense as it's incompatible with the physical laws of the universe. A change in bakeware material or thickness may alter how quickly heat is transferred from the air in the oven to the food, perhaps enough to change cooking time in some cases but not significantly enough to burn things.

Take for example a thick cast-iron pan versus a thin aluminum pan, the aluminum pan will get up to temperature very quickly and the cast-iron slowly as aluminum has a much higher coefficient of heat transfer than iron, and there's less of it to heat. If you're baking cookies then this could make a difference in your overall cooking time as on the aluminum sheet would start cooking the bottom of the cookies faster than the iron, and cooking time is short. In a cake it isn't likely to make any noticeable difference to cooking time at all.

In neither case would food suddenly burn - the heat difference between the food and the oven air isn't enough. If a 350F oven didn't burn food with one pan it's not suddenly going to reduce your food to a pile of ash with a different pan. I don't know what happened with this reviewer, perhaps their oven broke coincidently at the same time they bought the pans, or perhaps they just made it up - who knows! I'd ignore that in favor of other reviews.

Cook's Illustrated has demonstrated that different baking sheets can cook differently. They found that some of the sheets would cook unevenly or would even cook faster than other sheets, in the case of a double-layer one they tried. Their results were that finish (light or dark) was not as important in determining how a sheet behaved. More important was thickness and material. Sheets that were thin would cook faster than thicker sheets (overcooking the bottom in the time it took to cook the top) and aluminum sheets behaved better than steel sheets.

50% seems a big difference to me, but if you're comparing against a baking tray that keeps the bottom of the cake cool for several minutes, then switching to one that heats through very quickly will certainly mean the cake has less time-to-live in a hot oven before it starts to "burn". If you're only baking for a few minutes anyway then the time the pan takes to heat is a pretty significant part of the cooking process.

As GdD points out, this supposes that the oven is hot enough to burn the cake at all, in the case of them being left in some minutes past the point of being cooked. My experience is that this often is the case in cookie and cake recipes: if you don't take them out they burn. Where I define "burn" to mean any amount of undesired blackening, not necessarily that they actually ignite. Whereas for GdD it violates the laws of physics to bake cake hot enough to burn, so we're either using different oven temperatures or different definitions of "burn".

If this is what's happening then arguably the reviewer should expect there to be a difference between a paper-thin tray and a heavy one. Or, taking things to even more of an extreme, a double-layer tray like Lorel describes in comments. Or, why not: a Pyrex lasagne dish takes time to heat up. You can bake a sponge cake in one no problem, but you're on your own as to cooking time if the recipe is written for a normal cake tin.

The reviewer's failure to predict the inevitable, or belief that thin baking pans are just plain wrong, doesn't necessarily mean that this is not in fact what they observed :-)

As for why the reviewer can't just make the adjustments and stop burning things: if you want the top of it to cook hotter than the bottom then a thin pan doesn't really work whatever you do to the cooking time. That's not often necessary, but maybe they like their brownies crunchy on the top and squidgy on the bottom?

This information may be completely useless to non-British readers, but also when making Yorkshire pudding the gauge of pan can easily be the difference between burning or not, and therefore require an adjustment to cooking time.

Thermodynamics indicates heat transfer through contact (conduction) is the most significant means of heat transfer. Rate of heating via conduction is a factor of type of material and thickness of material. Law of thermodynamics applies to "sideways" distribution as well as through heating.

So let's take an extreme case: Starting from room temperature, with 50% of the surface covered in cookie dough, would a thin copper baking pan transfer more energy (heat) into the bottom of the cookie dough than a thick silicone pan for a given period of time?

Copper pan will transfer the ovens energy into the bottom of cookies notably faster than silicone would due to at least 100 fold difference in thermal conductivity. Thermal conductivity Copper 385 (W/m K) compared to Silicon Rubber - at best 2.5 (W/m K)

Thus important in the cooking experience is the rate of movement of heat both across and through a pan.

Not the answer you're looking for? Browse other questions tagged baking pan or ask your own question.

15
Best way to cleanly cut brownies?
5
What is the difference between a gugelhupf pan, a bund(t) pan and a rodon pan?
3
What pan can be subsituted for a Paella pan?
3
Where can I buy a larger than usual 13x4x4 pull man pan?
6
Is it possible to bake bread or the like using a stovetop tagine?
0
Ideas to cook dry beans fast in halogen oven
1
Can I repair a pan where a spot on the bottom changed after staying too long on the burner?
2
Is this cast iron pan safe to cook in?