What are the triangular shaped markings on asparagus called?

An Asparagus shoot has triangular shaped markings on it. I'm wondering what they're called and why there there (if possible)

They're something leaf-like. If you look closely, you'll find that they aren't just markings, they can be pulled away from the stem.

There doesn't seem to be a lot of agreement about the best name; you'll see "scales" and "leaves" in plenty of informal contexts, and "bracts" in some (but not all) more formal contexts.

On Food and Cooking says they're bracts, and actually mentions why they might be there:

The stalk doesn't support ordinary leaves; the small projections from the stems are leaf-like bracts that shield immature clusters of feathery photosynthetic branches.

That cluster inside them is what makes them bracts:

In botany, a bract is a modified or specialized leaf, especially one associated with a reproductive structure such as a flower, inflorescence axis, or cone scale.

Brittanica says "True leaves are reduced to small scales.". That's a bit vague about where it actually is on the plant, but there's an image later in the article making it clear what they're referring to: 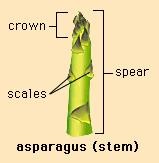 In asparagus (Asparagus officinalis; Asparagaceae), the scales found on the asparagus spears are the true leaves. If the thick, fleshy asparagus spears continue to grow, flat, green, leaflike structures called cladodes develop in the axils of the scale leaves.

That does match the definition of bract. Asparagus is only tender enough to eat when pretty young, though, so perhaps when you eat it those cladodes haven't developed yet. That's still the purpose of the scales, though. In any case, it sounds like "scale" vs "bract" may just be a difference in precision and perspective.

Not the answer you're looking for? Browse other questions tagged asparagus vocabulary or ask your own question.

6
How long to cook asparagus on a BBQ?
4
What's the best way to store asparagus?
10
What is the difference between white and green asparagus?
10
What's the skinny on fat asparagus?
2
Refrigerator pickles in plastic?
2
Why does my asparagus turn out too chewy?
2
Frozen Asparagus after thawed became extremely soggy and wet, any way to salvage?
0
Why cut and discard the base of asparagus, before dipping in water?