How to make sugar coated fennel seeds at home?

Fennel seeds have a great flavor and are good for digestion. I tried sugar coating them at home. But drying them up once the seeds got added to hot sugar syrup became a problem. At the same time seeds became gooey and it got all the more tough to take them out on a plate. I want to know what is the proper technique to sugar coat fennel seeds. Plz someone help!

The product in your link has been sugar panned, a process which uses a rotating drum to add a thin candy shell, such as on nuts or seeds. To achieve that effect, you would need either a machine or a panning attachment for a mixer such as Kitchenaid, as illustrated on Pastry Chef Central. 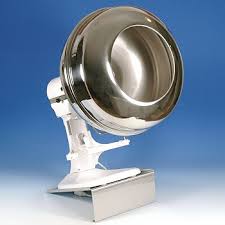 The process for making sugar-coated candies, also called comfits (usually with a core of fennel seeds, or nuts) is called panning. It's a tricky process, but not impossible - it was one of the oldest candy-making methods. Machines like those Dorothy mentions may be used commercially (or to make it easier for those who make in bulk), but it isn't required. Comfits can be made with a simple bowl or wide pan... or any number of elaborate suspended pans and setups that come between the simple pan and the mechanical panners.

A recipe made with sugar syrup, has the syrup heated to a soft-ball stage, and small portions of the syrup slowly mixed with the seeds in a bowl with high sides, with time to dry between each coating. The key is to keep the additions of sugar syrup small, like a tablespoon or so at a time, and the stirring constant - as the syrup cools and dries, the seeds will clump together, and as you keep mixing them, they will break apart into individual seeds with a very thin layer of sugar on them. Once they're dry, the next layer of sugar can be added with another tablespoon or two of sugar syrup and stirring. The comfits may need to rest additional time between layers, or periodically, to let everything dry thoroughly if the candies are becoming sticky. You need to add layer after layer after layer (as many as a hundred) until the coating is thick enough for your candies - a lot of repetitive work, but with a nice payoff.

If this is the method you were using, it sounds like you were trying to coat the seeds in a single layer, and maybe adding too much syrup at once, or not stirring enough to get all the way through the clumping stage until the seeds were dry before resting or adding the next layer. If you want to get a thicker layer to begin with, and are less concerned about the appearance, you can try making a thicker and dryer syrup, which will give the comfits a more raggedy appearance. Drizzling in a thinner stream from higher up should let the syrup cool a bit before it hits the seeds, giving a more uneven appearance but a thicker coating with the same effort. You might even drift a little powdered sugar in your pan to thicken and dry the coating on the seeds as they are stirred.

As an alternative to stirring the seeds in a bowl, they could be made in a wide pan - especially useful if you wanted to make a larger quantity, since they needed enough room to spread out while drying. The seeds could be tilted or swirled in the pan instead of stirred (that would be why the larger panning machines get the look from) - with the momentum being used to mix the seeds and break up clumps. You can use a spoon or even your hands to break up clumps as you go.

A couple recipes add gum arabic to help the sugar stick to the seeds in the first place... but not all of them do, so maybe keep it in mind if you end up having trouble with the first layer only (sugar sticks to itself for subsequent layers). It may depend on what you're using as a seed (that is, the gum arabic might be brought over from recipes where it's really needed into recipes where it isn't indispensable).

I'm almost certain I have seen a "raw" comfit recipe, I can't seem to find it at the moment, where the seeds are added with a small amount of confectioner's sugar in a wide pan, and water spritzed over the pan and it's swirled about. The water encourages the sugar to clump, and stick to the seeds, and the tilting and swirling the pan breaks up the clumps (merely moist sugar doesn't have that, that much sticking power). More water can be spritzed on as needed, or more powdered sugar added, to keep the layers forming. This process will give a fine sugar coating over the seeds each time - and the seeds are let dry, and the process repeated, until the layers form a thick enough coating. Being raw, so to speak, means the texture may well be different form a comfit made with cooked sugar syrup, molded sugar instead of spun sugar candy. I think this might be a newer recipe, since making a sugar syrup was a lot easier than grinding loaf-sugar to fine powdered sugar consistency by hand - so it would make sense as a recipe after commercial powdered sugar became available.

2
How to Make Nutella Icing without Powdered Sugar
10
Home-make yogurt: add sugar / something else with the starter?
7
How to tint powdered sugar (icing sugar)?
2
Using unrefined sugar to make candy
2
How to stop sugar syrup from crystallizing?
2
Sugar/Citric Acid Coating giving Gummy Bears a Wet Look
5
I always burn my fudge. Why?