Need translation of dish into English

I am trying to find for a descent equivalent for the Spanish "sartén de la abuela" or "sartén de los montes". That is, I want to know the name of the dish, how you order it from a menu, not the utensil (the pan itself).

Don't worry if you don't understand Spanish. The pictures are here:

"Sartén" is just a cast iron pan. And the dish is cooked and served in it. It is purported to be homemade or rustic. "Abuela" is grandma. "Montes" is hills.

Just imagine an assorted fry (meat, sausage) with two eggs on the top.

It would appear similar to what in the US is commonly called a "breakfast skillet", such as this recipe for one. 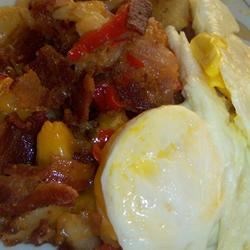 The 'skillet' comes from the pan that it's usually served in at restaurants (cast iron or some equivalent), and it generally consists of a meat such as bacon or sausage, usually a form of potato ('home fries' or hash browns are common, or they could just be cubed), eggs on top cooked to your specification (over easy, scrambled, etc), and often some kind of cheese.

Restaurants that serve such dishes here usually have fun or regional names added to describe the contents of the 'skillet', such as "American", Denver, Southwest, and others - but they all follow a similar trend.

The only main difference I can see is the form of potatoes seem to be julienne, or as they'd usually be called here, "french fries". This would be less common in the US, but many would embrace it as a great idea - just don't expect to find it on every menu.

Those images cover a wide range of dishes!  But many of them look like varieties of what in the UK we'd loosely call a ‘fry-up’.

That's typically associated with a full English breakfast, but also applies to other dishes of similar, mostly fried ingredients, at any time.

Not the answer you're looking for? Browse other questions tagged language or ask your own question.