Is it safe that my medium-rare steak is cold in the middle?

I do my steak in a heavy-bottomed pan on the stovetop for a couple of minutes a side on high heat and it comes out just as I like it - medium rare.

Before cooking, I usually remove the steak from the fridge and let it come up to room temperature. Yesterday I was in a hurry and didn't do that. The steak was done perfectly, but the middle was cold to the touch. Is it still safe to eat if the temperature in the middle is still cold?

It looked between Rare and Medium Rare on this image below: 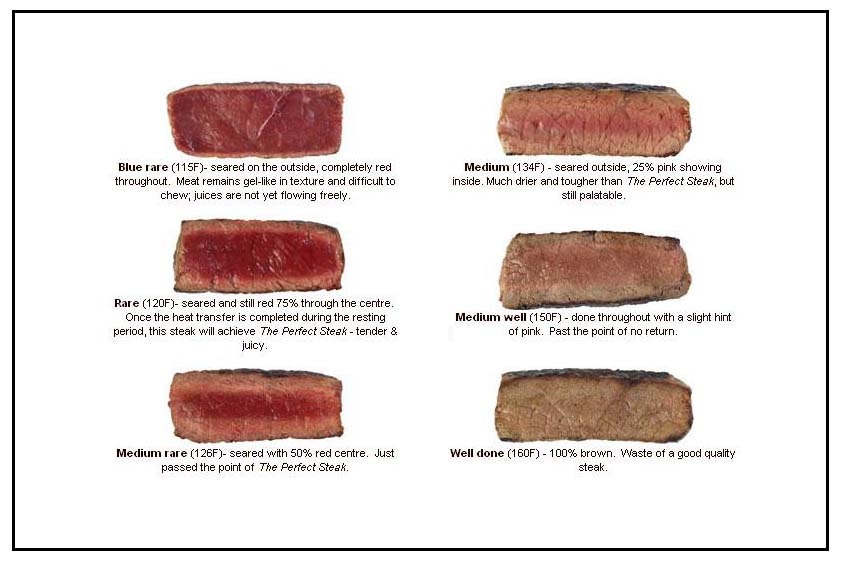 Solid meat (such as a roast or steak) can be quite rare on the inside and still be considered safe by conservative government or academic standards. Solid meat is different from ground meat because bacteria (Salmonella and E. coli are of particular concern) get mixed into the meat from the surface when the meat is ground. When you sear a steak, you effectively clean the surface where the potential bacteria live.

Those same conservative standards don't recognize rare (as in cold) as safe. However, steak tartare and other raw beef is served in restaurants all over the world.

Source Academy of Nutrition and Dietetics

According to the same extremely conservative source:

the meat needs to reach 145°F internally and stand for three or more minutes before cutting or consuming. Unfortunately, even if preferred by foodies, there's no way to guarantee the safety of rare meat. That also means raw meat delights, like steak tartare or beef carpaccio, are not considered safe.

I have many years of experience eating very rare and sometimes raw beef. If the meat is fresh and from a reliable source, I have no problem eating it very rare.

The standard caveat applies that extra care (and heat) is required for the immunocompromised or pregnant.

You should be fine. Keep in mind that steak can be eaten raw as in steak tartare or yukhoe, and some people like their steak barely seared on the outside, ie cooked blue.

Foodborne illnesses are killed by heat, generally the guidelines would be that in order to be completely safe you'd have to heat meat up to 160F, in other words well done. 125F (medium rare) is nowhere near warm enough to make food safe, yet we eat it that way all the time because it's low risk. With steak most of the time the dangerous bacteria is on the outside, and is killed very quickly by high heat. Poking steak before the outside has been cooked enough can carry bacteria to the center of the meat where it will not be killed by cooking, so it may be worth avoiding doing that if you can.

So it's safe to eat, but may not be warm enough for your taste. In the future I would suggest cooking to temperature rather than time as there are too many factors (meat thickness, starting temperature, pan temperature, air temperature, bone in or out, cut, etc) in cooking steak for time to give a consistent result.

29
What is the internal temperature a steak should be cooked to for Rare/Medium Rare/Medium/Well?

10
How do I deal with silverskin in a steak without trimming away all the fat?
4
Trouble cooking steak to the standard internal temperature
1
How to determine perfect pan temperature for steak?
1
Ate steak with the layer of fat kind of undercooked, is it dangerous?
1
How long should I cook a steak to make it medium rare?
2
What makes meat overly juicey?
4
How do I cook a steak well-done without it drying out?
5
Why bring steaks to room temp before grilling
31
How is rare steak made safe to eat?