How does Steelhead salmon compare with Atlantic farm raised salmon when it comes to mercury content?

Sorry, I know that this is old, but I wanted to follow up with some related data.

Caveat: I'm not a scientist, but my dad was a biochemist who worked in the aquatic biology field for more than 50 years, and I picked up a few things.

In 2001, a multi-species study was done on several species of fish including two types of local salmonid trout - cutthroat trout (Oncorhynchus clarki) and kokanee (O. nerka) in a large freshwater lake in Washington State (Lake Whatcom). Both of these fish are morphologically similar to Steelhead Trout (O. mykiss) in its non-anadromous form (also known as rainbow trout).

What all this means is, these are good marker-species to use because they are a lot like steelhead.

In a nutshell - even though these fish were raised in the wild and ate whatever they could catch (insects, small crustaceans and the like), their mercury levels were lower than most commercially-caught fish.

There are two sub-cultivars of this species - those that are raised in pens which are truly anadromous (i.e., they smolt, and spend half their lives in freshwater and the other half in saltwater), and those that are raised in raceways on one of the coastal river systems such as the Columbia, which are not anadromous and would technically be called rainbow rather than steelhead.

It is arguable that their flavor is not as strong in a salmon-y, fishy way as wild-caught fish. Those that are raised in pens are closer to wild-caught, because pens do not restrict the passing of small crustaceans and other species and thus allow the pen-raised fish to have a diet much closer to their natural one.

While I do prefer wild-caught fish for their flavor, I have often purchased and prepared locally-farmed steelhead.

I fundamentally have a problem with invasive-species that are farmed here in the Pacific Northwest (such as, for example, Atlantic Salmon). I do not have any issues with farmed steelehad, because it is a local species anyway and it seems to be a sustainable food source.

Lastly, here's a picture of some smoked steelhead I made in December of last year: 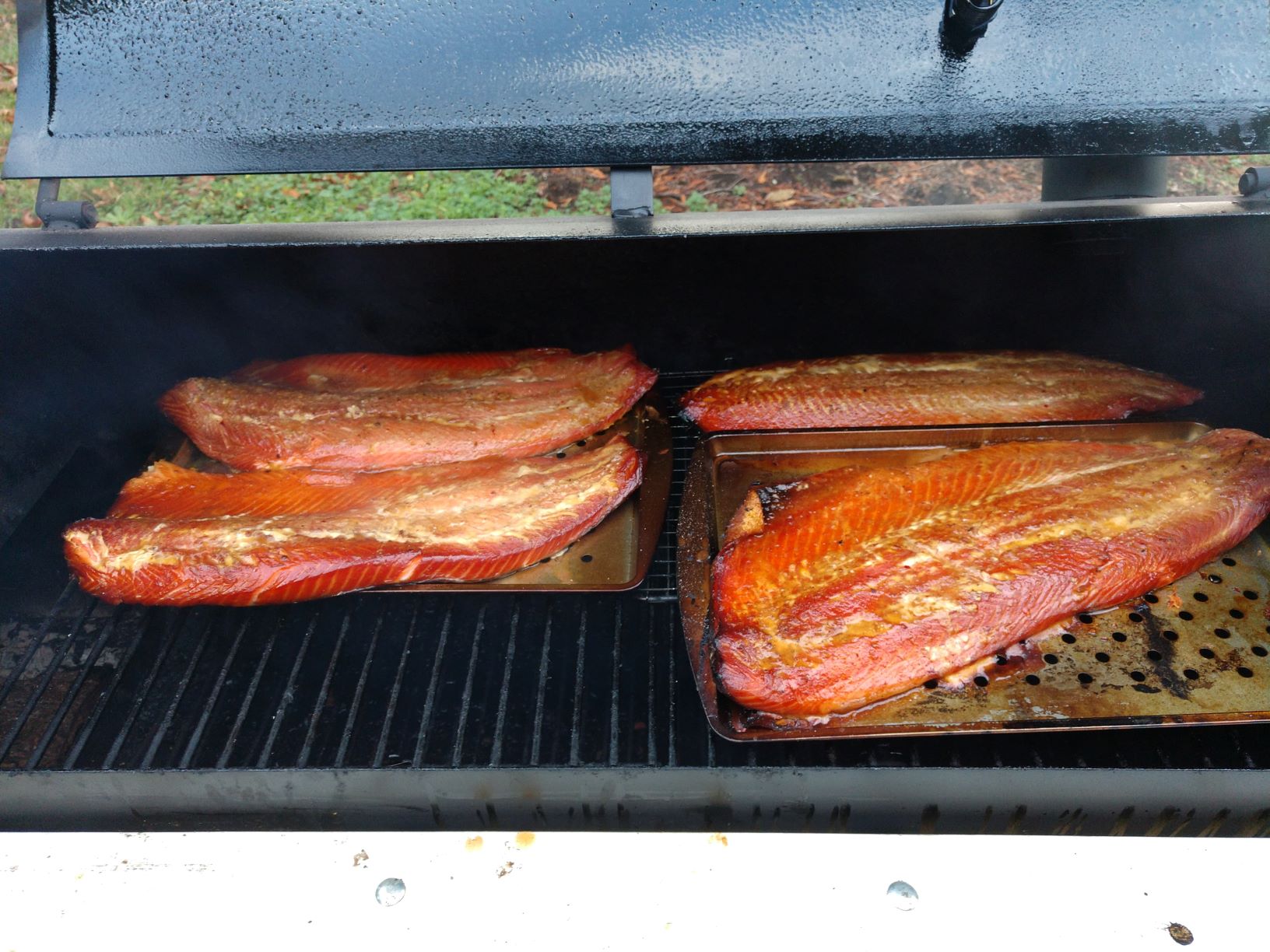 Actual numbers (ppm, etc.) depend on exactly where the fish were raised and how old they were when caught. Steelhead feed on zooplankten as fry, but they eat other fish, squid and mollusks as adults. Therefore, they take in whatever mercury has been consumed by their prey; the older they are when caught, it higher the probable mercury content in their bodies.

Farm-raised salmon are fed manufactured feeds which have strict limits on mercury content, and they have very little access or opportunity to capture wild prey, so their mercury content is usually significantly less.

Given the high levels of antibiotics, fungicides and other chemicals involved in fish-farming, however, there are substantially more of those chemicals in the fish. I'll take the mercury.

Not the answer you're looking for? Browse other questions tagged salmon or ask your own question.

19
What's the white liquidy substance that can appear when cooking salmon?
5
Pan-frying Salmon before baking it
5
Are there any differences in cooking techniques for Farm raised Salmon versus Wild Salmon?
4
Quality of frozen salmon (fish in general)
4
Ambiguities in Gravlax recipe
1
Should I cook frozen salmon differently from fresh salmon?
8
What is the difference between Atlantic and Steelhead farmed salmon in taste and how to cook?
0
Why did my salmon turn brown when I steamed it?
6
What use is salting salmon skin?