How shall I arrange my slowly-eating plan and preserve a box of 5Lb frozen eggs over a long period?

I have a box of 5Lb of frozen eggs with citric acid, where

Unopened product should be used within 3 days of thrawing.

I can't eat all after thrawing and opening it. I can only eat 1 egg i.e. 3 table spoon per day. How shall I arrange my slowly-eating plan and store the remaining frozen eggs over a long period? 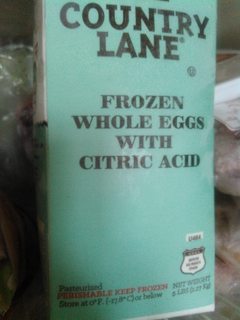 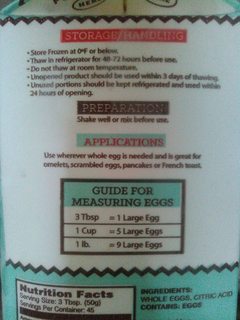 I would thaw one pound, and make something with it that I can freeze. For example. I bake quiches in leek and chard season - each quiche uses three eggs. They freeze beautifully once cooked (I slice them into servings before I freeze them) and it's easy to remove one slice, warm it in the microwave, and enjoy. So make three quiches and freeze them, you could eat two slices a day if you wanted to.

You could experiment with a variety of egg dishes that are not just "one egg, scrambled", or "one egg, fried" to use 9 eggs at a time. The internet is full of recipes for frittatas, quiches, soufflees, egg casseroles, and the like. Just remember to cook your creations before freezing, and to partition them for serving.

Probably the most useful idea is to thaw the whole box, and promptly open it and refreeze in single-egg sized, or divisible into single-egg sized portions (maybe using an ice cube tray? three, one tbs cubes per "egg"). Frozen egg cubes can probably be packed in the box again for storage purposes - or else some freezer-safe container, clearly labeled. You might wait until you have some egg-intensive need (baking day?) that will let you use up a fair portion of the product all at once - and recall that egg cooked into something will have its own safe storage times, likely longer than just the 24 hours if properly stored.

Once the box is thawed and opened, you have twenty four hours before it needs to be used - that can include refreezing (which pauses the time spent), as long as you remember that the time that has passed is still gone - ie, assume your re-frozen egg portions are only good for 20 hours in the fridge after re-thawing, if it took you 4 hours to freeze all the egg.

Of course, if you really don't want to thaw and re-portion before re-freezing, the only other option I can think of is to very carefully cut the box off of the still-frozen eggs, and while keeping it very cold (intermittently sticking back in the freezer if it looks like it's thawing?), cut into smaller, more manageable cubes freehand, then quickly pack up and store in the freezer again.

Also worth pointing out - you can cook with the egg, and keep the products for longer than just the egg. Foods kept in the fridge usually have 5-7 days, I think, but you can freeze foods that have been cooked with egg as well, nearly indefinitely. It likely won't use up your five pounds, unless you do a major holiday baking day to feed the whole family plus gifts, but it may use up a fair portion and then you can refreeze the rest.

You have 45 eggs and can only eat one per day. By the rules you would only be able to eat 2 (consume open within 24 hours).

I assume the 24 hours is based on oxygen contact. Let's say it thaws in 1 day then quickly pour some off in a small container you fill up so there is no oxygen. You should be able to get a full 3 days out of that but then you are still only up to 4 days.

Cook what is left over from the first and freeze 2-3 day portions. According to this can get 4 months. how to freeze cooked eggs

Not the answer you're looking for? Browse other questions tagged storage-method eggs frozen or ask your own question.