I am following this Serious Eats pie crust recipe. It's the second time already where I struggle with the dough folding stage. The dough is too crumbly when I take it out of the processor. When I (gradually) add water it stops being crumbly but then it gets too cracky. You can't really move it around or roll it.

Adding flour or water does not improve the situation. 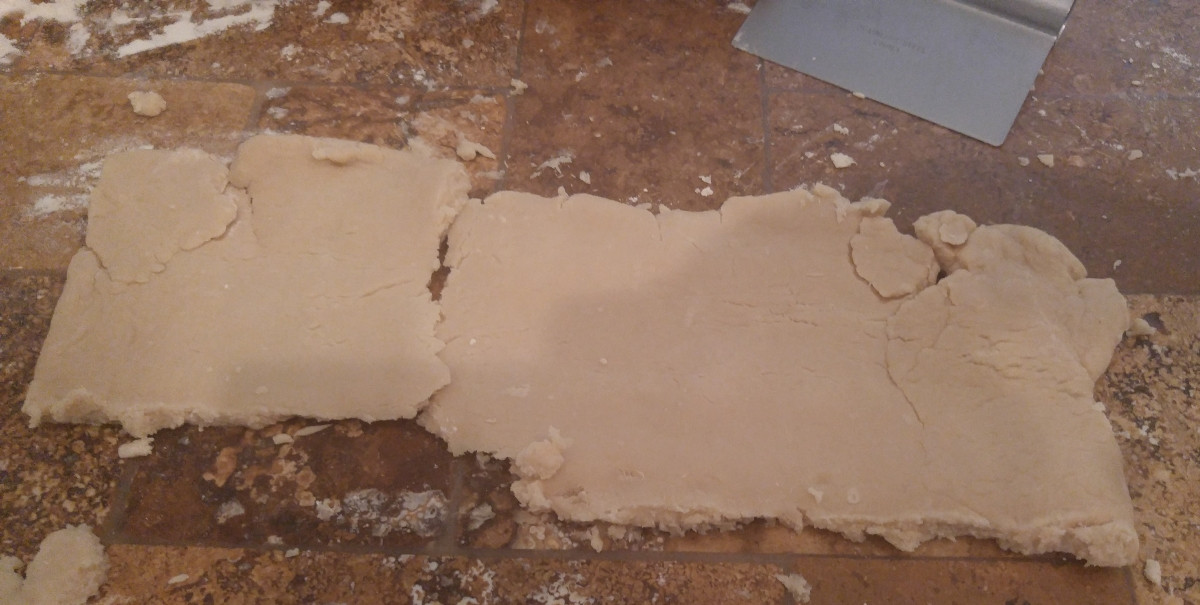 The serious eats article that accompanies this recipe does a good job of explaining what you are trying to accomplish.

You are trying to have wheat gluten that is interspersed with pockets of fat. The fat pockets are tender, the gluten is flaky. Perfect balance.

They dough that you have doesn't have any gluten development and is basically shortbread. If you press it into a pie crust it will be tender and flavorful but not flaky. It's still delicious so don't throw it out- it just won't be perfect.

There are three ways that you could have too little gluten:

I love this pie crust recipe. It turns the traditional method on its head and it works very well. It has fewer tricky points for failure than the traditional method but it still helps to know what you are doing.
I highly recommend reading the article that accompanies the recipe.
http://sweets.seriouseats.com/2011/07/the-food-lab-the-science-of-pie-how-to-make-pie-crust-easy-recipe.html

In addition to the excellent answers already provided, I would add that the temperature of the dough needs to be taken into account as well. In addition to making sure that your dough is well hydrated and that you are using the right flour, you will also want to ensure that your dough is room temperature or slightly warmer. If all of your ingredients are cold, or if you allow the dough to rest in a cold space, your dough will be cold and difficult to work with. Cracking will be one of the ways that the dough will react.

There are two possibilities I can think of.

The first is there's a problem with mixing - you said you gradually add water, does that mean you start mixing it into the dough as you add it, or that you let it sit between additions? It looks like the recipe adds the water all at once, maybe lets it sit for a bit to hydrate, and then folds it all in together. If you're mixing in between each addition, your dough might not be wet enough, with parts that are getting overworked (which makes it stiff) and parts not getting hydrated as well (making it crumbly).

The other possibility is, you mentioned that the flour you're using is called white wheat flour. There is a kind of flour called "white whole wheat flour", which is functionally between the highly processed all purpose and regular whole wheat - if this is the case with your flour, you may not be adding enough water... whole wheat usually takes a little more water than all purpose flour, and I think it does better if given longer to hydrate. In any case, even if your flour is different from white whole wheat, just being a different brand might be causing some of the problem, since all purpose is processed specifically to make it very predictable in recipes.

In either case, I would suggest sprinkling all the water the recipe calls for, plus a few teaspoons extra, and letting it sit a bit longer before you start to fold the dough. The extra water should make it a bit more pliable, and the dough being easier to fold should mean the fat has a better chance to stay in pockets with a looser dough flowing around it, so it doesn't get smooshed around into the flour as much because a stiffer dough means you need more force when mixing - which would make it crumbly instead of flaky.

2
When Making A Pie With Graham Cracker Crust, How Can I Get The Crust Just Moist Enough?
1
What should be the tooth of banana pudding pie?
6
Food processor for pizza dough
7
Why does my dough always need more water than the recipe calls for?
9
Why does dough and its ingredients need to be cold?
4
How to ensure that the bottom of blind baked pie crusts brown properly?
1
Using proofed (?) yeast in a recipe (confused about amounts)
5
Sourdough bread uncooked from inside
2
Why does rye flour dough require more water?
3
Pie crust too soft to put in pan