How can I pit cherries easily and neatly?

I would like to make a recipe I have found for Cherry Clafoutis. But, I have never had any luck pitting cherries. I leave a lot of the cherry flesh attached to the pits, or I just rough the cherries up way too much.

This is one of the rare cases where I tolerate unitaskers in my kitchen:

A hand-held cherry pitter like in the photo below (or a similar model) needs little space in a drawer and works for olives as well. Unless you plan to pit cherries by the bushel, it is totally sufficient. 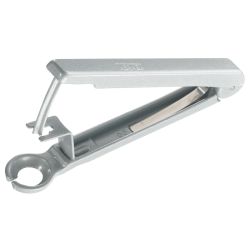 For a more "hacky" aporoach, some use a bent open paperclip, but I find them too flimsy and hard to grab. A classic hairpin is a lot sturdier: 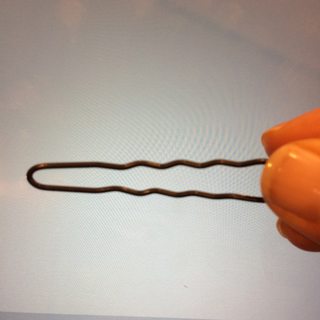 Push it in from the stem end, circle the stone to separate it from the flesh and pull / pop the stone out.

If your cherries need not be whole, cutting them half open with a paring knife is an option, use the same technique you'd use for pitting plums. But it's a bit of a fiddly work and, unlike with the methods above, you risk cutting yourself because the juice makes the fruit, the knife and your fingers slippery.

I've had decent luck pitting cherries in assembly-line fashion - it seems to go remarkably quicker than doing each cherry as a whole.

What I usually do is wash the cherries and pick off all the stems, then go back and fix any that need modifying (cutting off blemishes or whatever). Then I pick up each cherry and use a sharp paring knife to slice around the circumference of each cherry (occasionally wiping off the cherry juice before it drips on my fingers). Once they're all cut, it's a quick job to twist the cherries halves in opposite directions, toss the non-pitted half into whatever bowl goes for the finished cherries, and set the pitted half back down (and cheer for half the half-cherries done!). Usually I run my thumbnail around the cherry pits and pry them out. I suppose you can use a knife, spoon edge, or anything else to loosen the pit if you don't want to use your thumbnail. And the last step is prying out the pit, and then toss the other half a cherry into the bowl - and done! I usually pop the pits in my mouth to hold them as I'm prying them out, until I've finished with a batch being pitted, and spit them straight into the trash - it means any flesh or juice isn't wasted, it is tasted, and it means I stopped absentmindedly dropping the pits in the same bowl as the pitted cherry halves.

The steps aren't terribly different from pitting cherries one at a time or, for that matter, any other stone fruit - but doing the whole row at each step instead of pitting berry-by-berry seems to go remarkably faster, and feels a whole lot less fiddly. And it's easy to wash off the juice between steps, to put things away or take a break, and generally to use the pause to avoid juice slipping, dripping, or staining anything... especially with the knife, that step is literally a minute when all you do is swipe a circle and move on, but gets more dangerous if your hands are slippery with juice as you're doing one cherry at a time.

Pitting them one at a time always feels fiddly and annoying and takes concentration. I'm not sure why doing assembly line feels so very much faster when it has all the same steps, but it really does feel like it goes quickly.

Not the answer you're looking for? Browse other questions tagged cherries or ask your own question.

3
How to make your own glazed cherries?
6
How to avoid 'fake tasting' fruit
5
What to do with too-bitter sorbet?
1
How are maraschino cherries pitted?
1
Using previously frozen salsa
1
Does the "plunger" type cherry-pitter work?
6
Cherries + 2% salt + 1 week at room temperature =?
10
Poisonous Escoffier recipe?
0
Can sour cherries be used in a semi-stable bar?
6
Why might beautiful looking morello cherries be tasteless?