What is this Tibetan dessert? 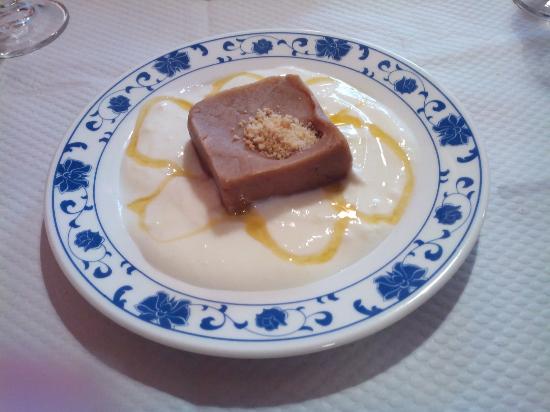 The white component is 'fromage blanc' (fresh cheese) with honey.

I had it years ago. The main square component was rather sweet and tasted like it was made of flour (and delicious) but not too sugary. I can't remember whether it tasted at all salty or not. No fruits or obvious vegetables inside. (no carrots)

There were a couple outside possibilities that I saw - though its worth noting the differences in description mean that the dish you had would have to be a variation specific to that restaurant, as far as I know.

One possibility was the cream cheese burfi - it is specifically mentioned to be a tibetan dessert, and the major flavors would be cream cheese, sour cream and milk (which would blend into the fromage blanc), but it is also made with flour, salt, baking powder, and of course sugar - which might give the right flavor profile that you mentioned. It is traditionally made with nuts (almond and cashew) and also raisins, but this might be a simplified recipe to suit that particular recipe, as I mentioned.

A bit of an outside possibility, but the description for gtor-ma cakes sounded like a possibility - made with parched barley flour and butter, the flavor profile would indeed be strongly of flour and not too sweet (and the fromage blanc with honey would give the whole a sweeter taste for a dessert dish). Problem is, this cake is usually elaborately decorated as a religious sacrificial offering, mostly in cones (so perhaps not plain squares unless the restaurant was making their own very liberal interpretation of the dish).

Final possibility I saw, was Thue, a traditional dessert that best fits the appearance of the dish, but seems maybe less of a match tastewise. Thue is made with dri, a harder cheese (like parmesan or something) finely grated, brown sugar, and unsalted butter - mixed into a smooth, slightly crumbly paste and pressed into brick form. I look at the picture and think this dessert fits, even with a sprinkle of brown sugar on top, but the taste I imagine would be different from what you described, saltier (but still sweet) and rich, and not much like flour since the main component is sharper, drier cheese. Maybe the flavor profile would be closer to your description if this restaurant also mixed in barley flour, like tsampa or pa, where dri cheese is mixed with barley flour, tea, sugar and butter - but that's a snack and not a dessert.

In the end, I think a better description of what the dish tasted like would help a lot to figure out what's in it - though it can be hard to describe offhand and after the fact, I know - so I though I'd offer up these dishes because maybe one of these descriptions can jog your memory of the tastes enough to guess which it was (or worse comes to worst, make them and find out)?

Not the answer you're looking for? Browse other questions tagged baking food-identification restaurant-mimicry or ask your own question.