How do you score pork skin?

We cooked some pork belly over the weekend and part of the recipe is to "score the skin".

We have some sharp knives but nothing really worked well. It was really a battle to cut the skin. We even tried out some sharp scissors!

If you don't score the skin, you don't really get decent crackling.

Is there some technique to doing this?

I recommend (and use) a utility knife.

Not only are they fairly tough and sharp, you can adjust the blade to the depth you need (you don't want to cut too deep). And the blades are cheap to replace... 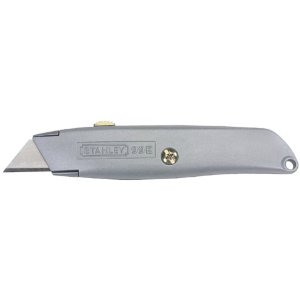 As others have noted in the comments, be careful with this as you would with any knife: the blades may be small, but they're quite sharp.

I tried a utility knife in the past but that was no good. I also used a long knife [see image] which was sharpened on a grinder but that did not help either. It had a jagged or rough edge which made the same mess as micro-serrations.The fatty meat clogs up the cutting edge and makes it in effect blunt.

Then I took the same knife and buffed the edge with a buffing wheel on a grinder, until it was shiny smooth and would hack on its own weight at 25 degrees into my thumbnail, and that did the trick!

A tip: Semi-freeze the belly in order for the skin to be hard and it will be much easier to cut. The alternative is ask your butcher to cut small squares as they usually cut a few big squares, which is not what you want. 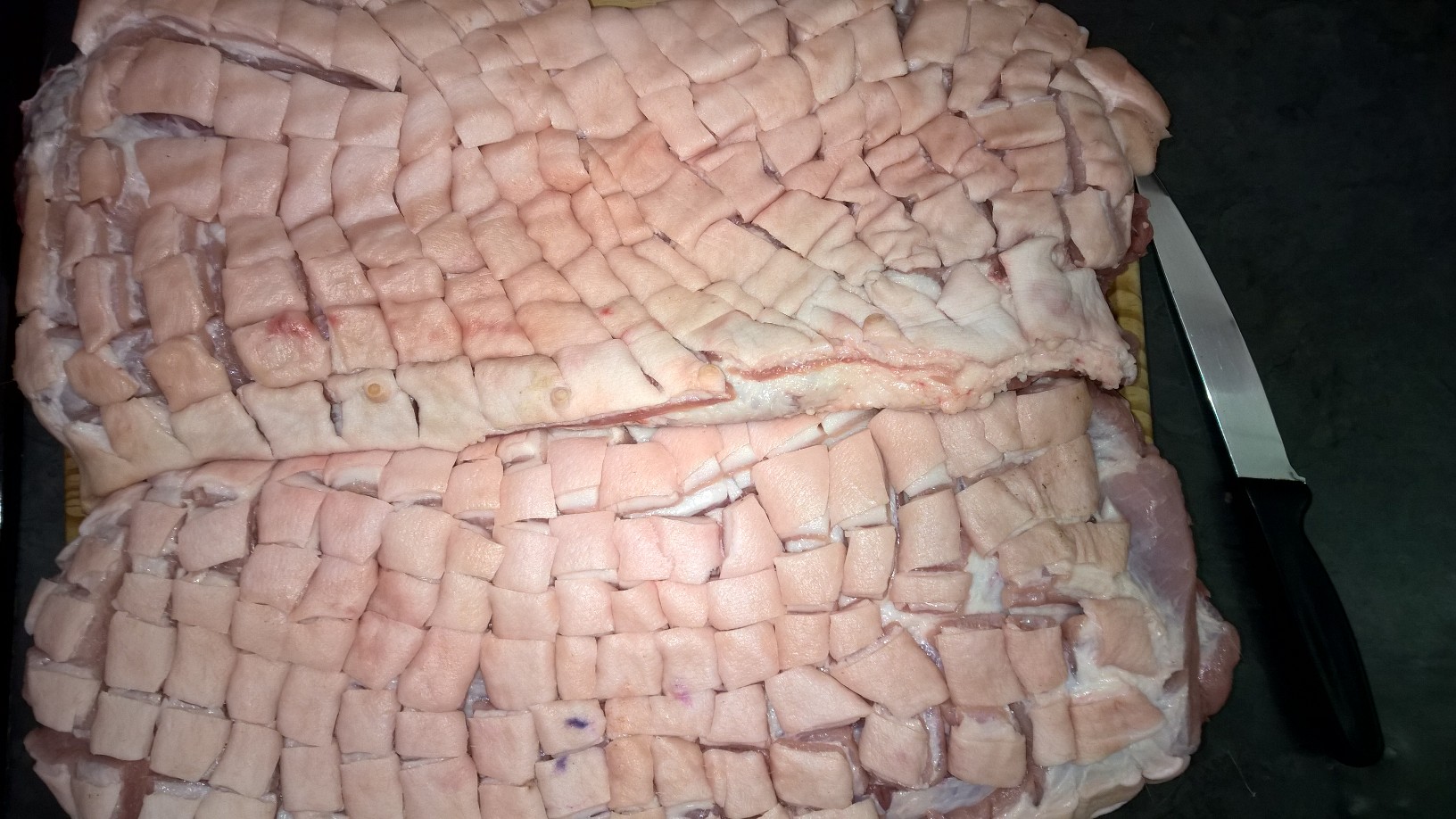 The utility knife that Knives mentioned work fine, and they're pretty cheap at the hardware store, but I tend to have roofing tar or the like on any of the ones I have (and the snap blade knives I don't want to disassemble to clean after using for food)

I've only done it for ham, so I don't know if other parts are worse to cut through, but I just use a paring knife. As I don't put them against a cutting board very often, they keep their edge. I even use one of my less expensive knifes (Wustof Silverpoint), because it's got a thinner blade). I don't hold it by the handle, though -- I pinch either side of the blade, and let just enough of the tip be exposed to cut to the depth I want.

Don't use a "micro-serated" blade for this, it grabs too much and will make a mess. I don't even know that you'd want a serated blade, just a good, sharp, small knife.

Completely random, but use a scalpel like the ones Surgeons use. you would be blown away how clean and controlled you can score, and you don't even need to semi-freeze as some have suggested.

mmm crackling.. I had a recipe that called for using a hairdryer. Made the best crackling ever with that.

Freeze the belly. Set skin side up in a bowl. As soon as skin thaws cut with very sharp long knife. 18 inch blade. Your pig sticker for going into the heart when you butcher. Long cuts mild pressure May have to cut more than once down grove made.

This doesn't make sense to me.

I've always used my 10" Henkels carving knife. I just hone it really well, and drag it over the skin with mild pressure.

It takes a couple of passes, but it does work.

use a pork scorer - 3 bladed cutter designed for scoring pork

This is why you need a good sharp knife in your kitchen. I moved on to good japanese knives and sharpening/honing wet stones (Naniwa super stones) to give it a rasor edge, literally. Japanese knives needen't be expensive, they are available from €50,- onwards, you just need to know what to buy; look for blue steel and use sharpening wet stones only! no steel like the butcher does, this steel is too hard, and can chip, so also no bone or frozen food chopping, Enjoy and look where you cut! I have been to the hospital just once, steep learning curve.

12
How do you make pork rinds?
2
Pork rillettes - drain fat before shredding or not
9
What are good techniques to prepare liver?
3
Substitution for beef (veal) in a stew
7
Removing hair from pork belly
1
How do you separate the skin from pork?
3
How can I achieve flavorful, gelatinous pork broth economically?
3
Crispy pork belly, how can I cook the inside more?
6
Reproduce Korean BBQ Pork Jerky
1
How can I get my flavorings to flavor my carnitas all the way through the pork?