Difference between burritos, chimichanga, and enchiladas?

What is the difference between burritos, enchiladas, and chimichangas?

An enchilada is a corn tortilla wrapped around some filling (often meat and/or cheese), covered in sauce. The sauce is really defining here: the word is derived from a verb meaning "to season with chili". The sauce usually involves chili peppers, but doesn't always, especially for Tex-Mex and American Variants. Since it's covered in sauce, you eat it off a plate presumably with a fork. The tortillas are usually 6-8 inches in diameter - small enough that you can put a few enchiladas in a row on a plate. 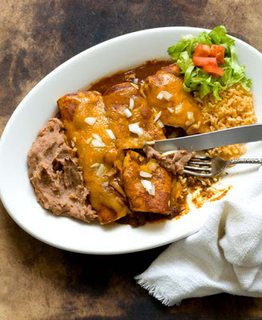 A burrito is a flour tortilla wrapped around filling, with the ends closed. In the US, they're often pretty large and substantial. They're generally just the tortilla-wrapped thing, so you can hold it in your hand and eat it. They are also sometimes served "wet" or "smothered" in sauce, but that's a variant. The tortillas are usually bigger to allow folding around a decent amount of filling. You'll see "burrito size" tortillas that are as small as 10 inches or so in stores, but the kinds you get in restaurants might be easily 13-16 inches. The big ones are also called Mission burritos, and are often wrapped in foil for easier eating. (That's the tortilla diameter; the actual burrito is substantially smaller after the folding to close the ends.) 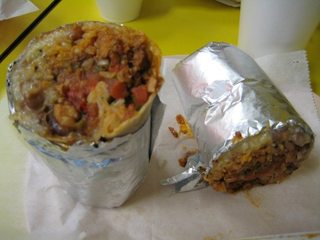 from Los Altos Taqueria on Yelp

A chimichanga is a deep-fried burrito. It often comes with queso and/or sauce over the top, but that's not a defining characteristic. Usually they're served on a plate, with the idea being to cut into it with a fork and knife. 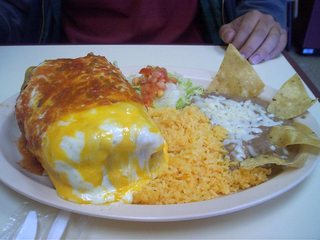 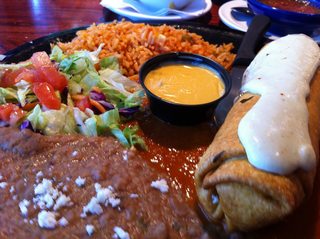 first from Wikipedia (completely covered), second from Trudy's in Austin via The Fat Artery (visibly deep-fried)

9
What's the difference between fajitas, enchiladas and tacos?
1
Is there such thing as a chimichilada?