How to easily minimize waste using a potato smasher?

I have a new tool. At Walmart they didn't seem to have the kind of potato masher I'm used to, so I bought this thing. 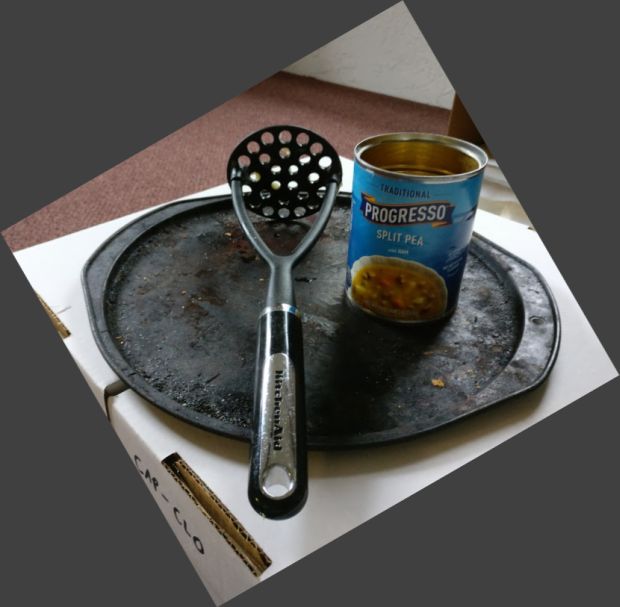 (The can of soup is there for size reference.§) From a young age I'm used to the tool with a long stiff steel wire extending out of the handle about 3", zig-zagging on itself several times in a flat plane, then returning back to the handle. Since that thing mashed, and this thing smashes, I call it a potato smasher.

I had not yet cleaned up, so you can see some mashed potato in a few of the holes. Therein lies my problem. As I smashed the boiled potatos, potato would extrude through all the holes. It was easy to remove potato from top and bottom for multiple mashes -- just wipe it off with a fork. But with 24 little holes, I did not know how to efficiently remove the contents of the holes and return it to the smashing bowl when done. Is there an easy way to remove potato from all the holes without waste?

In the end, after I was done smashing, I cheated. Using my mouth, I just sucked out as much potato as I could. It was good! Even with my big mouth, I could not get it all, though.

§ I lied, sort of. The can is also there because that was our gravy. We lacked normal gravy ingredients, so I got some help from Necessity's kid. Using heated split pea soup as gravy ended up tasting great. More vegetables, plus the ham in the soup provided a bit of meat. (I'm not pushing the Progresso brand; it is just what we happened to have.)

There is no need to remove potato from the holes on each stroke, which appears to be what you are describing doing. Just pick it up and smash it down on some un-smashed potatoes until there are no more of those. The potato already smashed through the holes will eventually fall back into the pot during this process.

Then, when done smashing, turn the tool sideways, knock it on the rim of the pot to dislodge most of the potato on it, and use a rubber spatula to scrape off what's left.

Or expand your shopping beyond wal-mart - I'd bet $20 I can find a wire-type masher at a thrift store nearby, probably for $1 or $2 at most, and certainly by using the same technology you use to post your question you can have one shipped to your house for a bit more money, if this type offends you. You can also mash them with a hand or stand mixer. Or, indeed, a fork.

Made mashed potatoes last night, boiling until tender with chopped parsnip in the pot. I have that same masher, and used it to achieve a semi-whipped version of mashed potatoes, first adding butter and a bit of milk, mashing straight down, and once all is mashed, using the tool to swirl around and around in the pan. This mashing and the swirling technique (accompanied by many sharp "smacks" on the edge of the pan to "clear" the tool), achieves the perfect mixture for me. It is a great tool for mashing cannellini beans in a skillet with a bit of evoo, garlic, herbs of choice, salt, pepper and lemon juice for a delicious spread. I once had the old wire-type masher and don't miss it. I do think smacking this tool sideways on the rim of the pan clears the holes rather well. And of course rinsing immediately and soaking the masher end of the tool in a bowl of water to make cleaning easier.

Not the answer you're looking for? Browse other questions tagged equipment potatoes or ask your own question.

12
How much does a "large" potato weigh?
9
How can I cook the perfect potato for a potato salad?
1
What is a German potato grater called?
6
How do you know when a baked potato is done?
4
How can I fry leftover mashed potato?
6
How to differentiate normal potato from the potato that has sweetness?
57
How do I wash the "pokey" side of a box grater?
1
How can I easily peel baby round potatoes?
1
How to make potato wheel not stick to mold