TL;DR Why do I find liquid at the bottom of the pan when I make clotted cream?

I've read about clotted cream in books all my life, but it wasn't a thing where I grew up. I recently discovered this recipe online and have tried it out a few times. I follow the directions exactly:

Each time, I have the same issue. The top layer of the result looks just like in the video, but the buttery portion goes only about three-quarters of the way down the baking dish. The rest is just liquid. In the video, when Steve scoops out the cream at 4:27, it is obvious that there is no liquid at the base.

What accounts for this difference? I have three theories, but don't know whether any of them is correct:

I'm attaching two pictures. The first shows the liquid after I've removed a small portion of the clotted cream from the top. 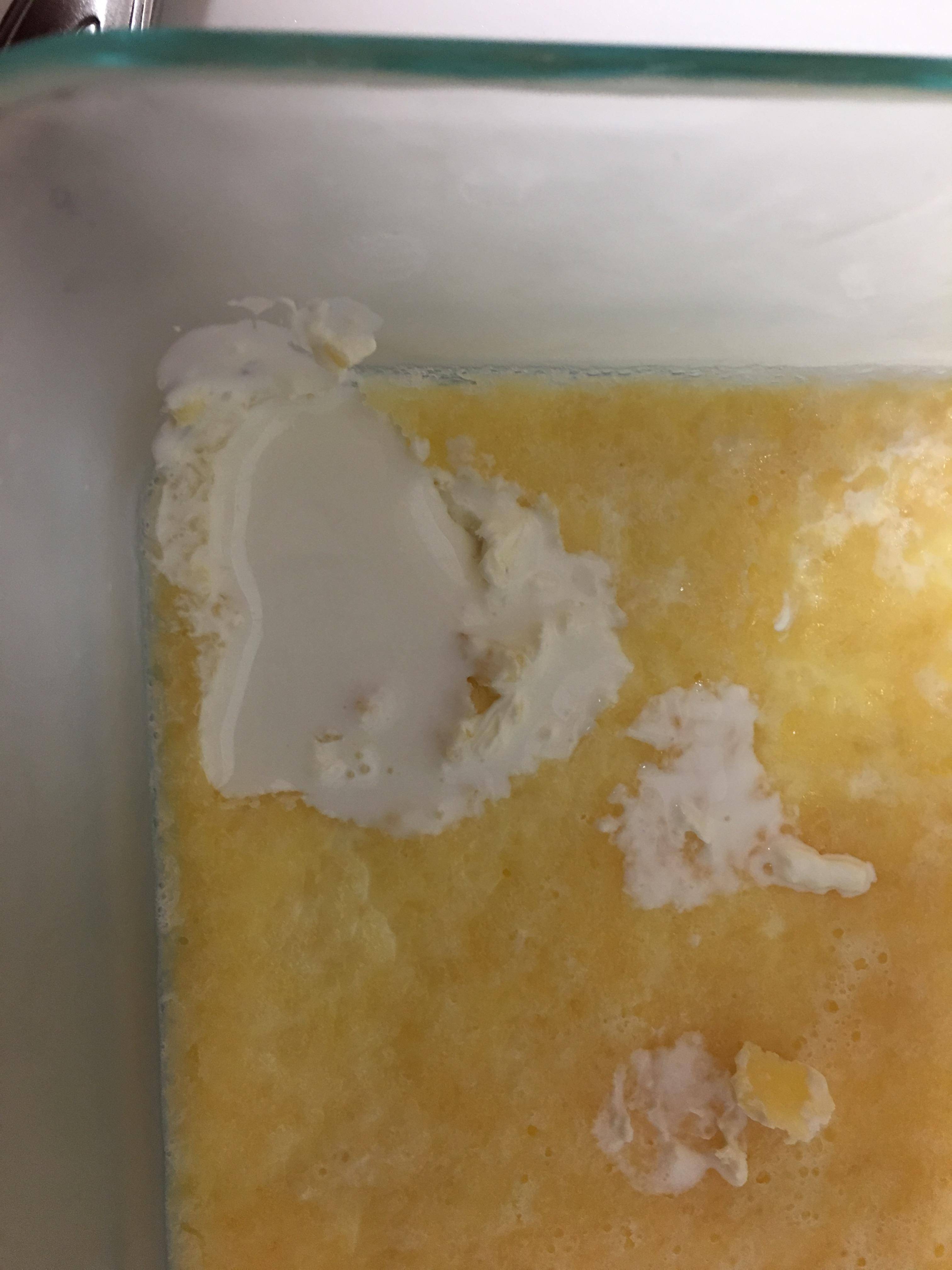 The second shows the liquid by itself, poured out into a jar. 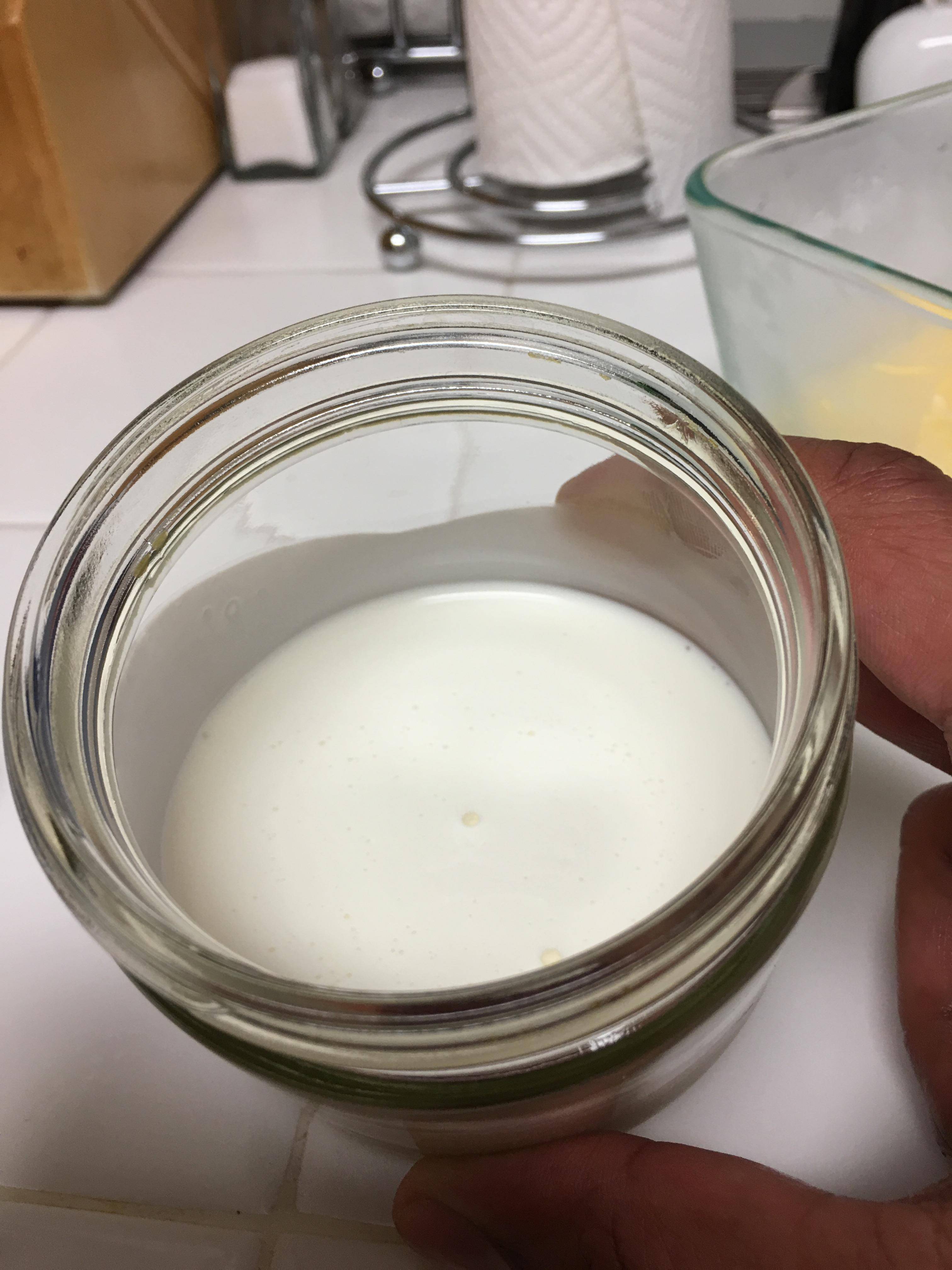 From reading this other question, it seems that whey accumulates at the bottom of clotted cream. But I don't see any liquid at all in the video. And besides, the liquid I have does not correspond to my idea of whey. It's still somewhat viscous and yellow, and lacks the grey, transparent thinness of the whey I get from yogurt.

I thought that it might be buttermilk that remains after the milkfat separates, but it also seems too thick to be buttermilk. I put a dash of it in the scrambled eggs I was making to go with the bread I baked to go with the clotted cream, and the eggs were fine. I've previously used it instead of whey or water to bake bread, but it turned the bread somewhat gummy. So what is this liquid anyway?

Oh by the way, the semisolid stuff above the liquid layer is very tasty, but since I've never had any other clotted cream, I don't know whether it is the taste it's supposed to be.

Clotted cream is essentially clotted milk solids (similar to butter or cheese, but obviously made quite different, and with a different taste), and the leftover liquid is analogous to the whey left over from cheese making or the liquid that remains after churning cream into butter.

It's likely that using a higher fat content or raw (as in fresh from the cow this morning) cream may result in less leftover liquid, but I've never tried it to be sure-- perhaps someone with more experience can tell us.

You must use batch pasteurized NOT ultra pasteurized. Ultra does not work. It's hard to find, but it's out there. Kalona SuperNatural cream is what I use. Horizon and Organic Valley won't work. After 12 hours in the oven at 180 degrees, you let it cool for an hour or two at room temp, then into the fridge for several hours. When it's very cold, you scoop (GENTLY!) the solid and creamy portion from the top with a slotted spoon and put it into a bowl. The semi-translucent liquid below is the whey. The buttery top layer and the creamy layer just below it (that sticks to the buttery crust) is what you put into a bowl. I stir it together a bit, then put in the fridge over night. Basically I start on Friday night with putting it on to bake overnight, the pull it out in in the morning, cool it in the 'fridge, and Saturday night I scoop and stir. On Sunday it will be ready to go!

2
What do you get when you reheat and cool clotted cream?