Can you peel a soft boiled egg?

Is there anything other than the temperature of the shell making it difficult to peel? I'm sure the white would be firm enough to withstand a gentle peeling if you're careful?

I was hypothesizing about it as a potential easy alternative to poached (all contained nicely in it's own shell for cooking), but I've never seen it before. Is it impossible, just a stupid idea, too risky (i.e. being squirted with trapped hot water from the white/shell etc.) or just something that hasn't been tried?

Yes it is absolutely possible!

Soft-boiled eggs are delicious. I make them all the time, love it especially on ramen: 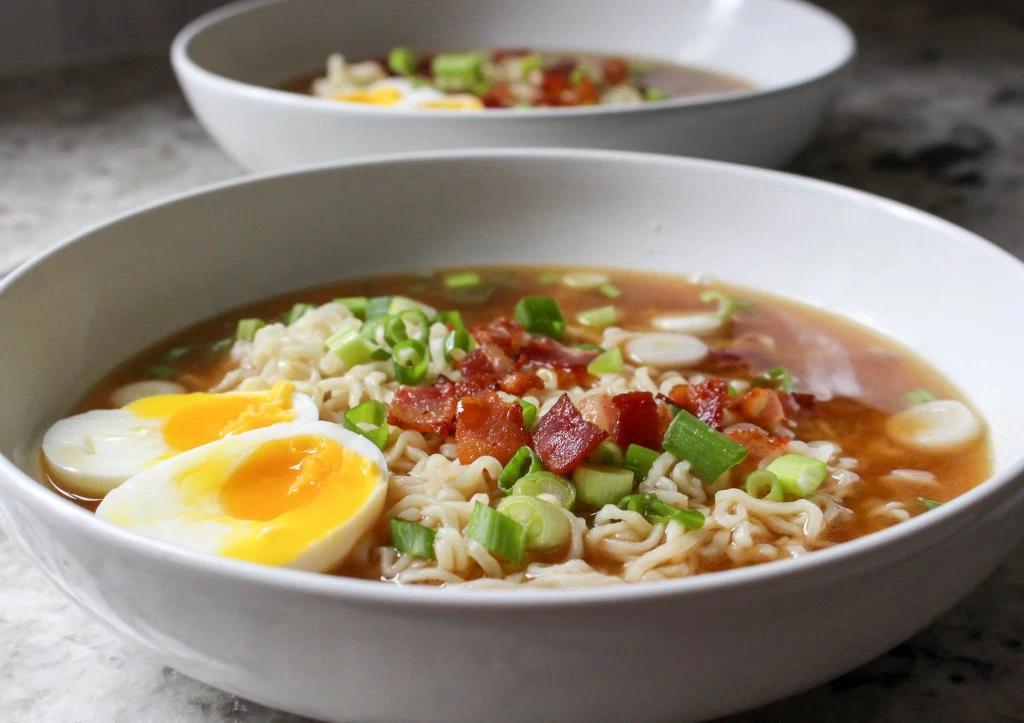 The trick is to boil the egg in a rolling boil for 5 or 6 minutes depending on the size of the egg, then dumping them in cold water to stop them from cooking further. This product might help too.

You have to be a little bit more careful than with hard-boiled eggs when peeling, but it really isn't very hard to do!

I then dip the meat from my ramen in the egg yolks, and later break the white in pieces and eat it with the noodles. Yum!

If the white is firm enough to hold shape it should not be different than peeling a hard boiled egg.

I have had it by mistake because I did not boil the eggs long enough.

They have different taste than poached from not being in contact with water.

But why? You would need to cut them to eat them. If you just bit into the whole egg the yoke would squirt out.

What problem are you trying to solve?

What I do is cut the egg open with a table knife with a whack. And then spoon the egg out with a spoon. It is faster and you get a hotter egg as you have to let the egg cool some to peel.

It is possible, and not too difficult to at least attempt.

The white will have a different to texture to that of a poached egg, but not a million miles off, and the yolk will be the same (assuming they are cooked the same amount)

I just ran into this situation today. I don't normally cook, but due to a nasty protracted cold, I bought (among other things) extra large eggs. I would bring them to boil, then set them aside. For 12 minutes. Boy, that was overdone. After some web searching, I found that I should set them aside for 5.5 minutes for runny yolks. That worked fine, but man were they hard to peel. For both 5.5 and 12 minutes, I would douse the eggs in cold water afterward to make them easier to handle and peel.

The difficulty in peeling suggests that the less cooked the egg, the harder to peel. This experiment was done with eggs from the same dozen. Odd thing is, I can't find mention of this on the web. On the contrary, I find the opposite claims. I wonder whether such a claim was based on a controlled experiment.

Barring any other egg boiling hacks, I had to boil them longer if I wanted easier peeling. I figure that one way to boil the whites longer without boiling the yolk as much longer (it is the whites that are in contact with the shell) is to put the eggs from the refrigerator directly into boiling water rather than bringing the eggs to a boil within the water. This is because of the temperature gradient between the egg interior versus the surface, which is minimal when the egg is brought to a boil.

Heck, if I kept the pot on the burner for maybe about half of the 5.5 minutes mentioned above for off-burner time, followed by cold water dousing, I would probably get a very well done whites, with hopefully runny yolks. I expect this because I'm maintaining the surface of the egg at boiling temperature, so there will be more heat diffusion into the egg, at least initially, which means more of a gradient. I will have to experiment. In any case, the more well done the surface of the egg, the easier it is to peel, according to the experiment thus far

Another thing that web search has revealed to be helpful is to add vinegar to the water. I have yet to try this.

2018-03-11 UPDATE: My experiments indicate that I can in fact cause the outside white to cook much more than the inner yolk, thus enabling easier peeling while maintaining a soft yolk. I placed the eggs directly into the water after it was brought to boil, and I kept the water on boil for four minutes. The outside yolk was indeed well done and easy to peel. The only problem is that I caused too much differentiation between the well done outside and the underdone inside. The inside was still quite wet. Next time, I will try five minutes of continuous boil, which should cook the outside even more, making it even easier to peel, while propagating more cooking into the yolk.

I came upon a realization, however. With a runny yolk, I really don't want to peel the egg. I want to lop off the top and spoon out the inside. So the whole question of peeling a (very) soft boiled egg is kind of moot for me. I will still conduct the 5-minute boil test out of scientific curiosity.

2018-03-31 update: Transferred eggs directly from fridge into already boiling water for 5.5 minutes before immersing them in cold water. Shell was easy to peel, and yolk was still quite running, though more cooked than previous attempt. I think 6 minutes boiling is the sweet spot for runny yolks. Again, my experiments have been with "extra large" eggs.

I have a thing for egg salad as well as soft-boiled eggs, so I regularly do a dozen at a time, without salt or vinegar or pre-cracking, and every time this is what works...

Boil your eggs to desired done-ness (everyone's varies depending on the number of eggs/pot size/burner setting/etc.

This is the important part:

Your success depends upon your rinsing and rolling skills as you endeavor towards that one-second shell. Practice makes perfect. Good luck

Not the answer you're looking for? Browse other questions tagged eggs soft-boiled-eggs or ask your own question.

5
What am I doing wrong soft boiling my eggs?
5
How can I obtain perfectly peeled boiled eggs?