How to slice bread thinly so it won't crumble?

I make sandwich bread to replace store-bought. However, I need relatively thin slices for peanut butter and jelly and other kid-friendly sandwiches. Any tips for slicing bread?

What I've always found works for me is to skip the bread knife and use a very sharp, smooth knife instead - chef's knife or similar - and slice the bread gently so the sharpness of the knife cuts it, rather than relying on the force or pressure from the hand that can encourage crumbling. It also helps a great deal to use a knife that's long enough, so that the slicing is a smooth, continuous motion and the tip of the blade doesn't pass through the bread - this can snag, and encourage tearing or crumbling.

I've cut slices with an edge a half a centimeter wide with this technique. Any thinner than that and the corner of the crust may crumble or tear off entirely, usually at the bottom corner where the crust gets stiffer again and prefers to tear right off rather than cut. Though to be fair I'm usually quite poor at judging crookedness of a cut and so the other edge tends to be a bit thicker. If you can already cut straight slices, this may not apply to you.

The serrations on a bread knife tear the bread up more - you can get smooth cuts, but at the loss of all the bread under the knife (the knife's width) being processed into crumbs. That kind of knife works better for really sturdy, crusty loaves where the extra crumbs are worth it to get through the thicker crust cleanly - and usually thicker slices are preferred to better enjoy the crustiness. A smooth knife is better for cutting thin slices, especially if the bread is soft - though it also works reasonably well on bread that's dense or crumbly.

So what you do is, if the crust is stiff (or just because it makes a cleaner cut), use the tip of the knife to break the uppermost part of the crust (jab it in and saw sideways) to make a notched line in it where you want to cut the bread. It should be deep and wide enough so that the edge of the knife will be through the crust when laid in the break sideways, as for cutting. The crust is smooth and tough, and especially if the crust is smooth enough to slip, the crumb can squash down before it cuts the first width of the crust - undesirable, and more likely to crumble. But once it's broken, the knife can cut sideways through the thin crust much easier.

Once the upper crust is broken lay the knife in the break, and gently, gently, start moving the knife back and forth. You are using a sawing motion and cutting with the sharpness of the blade, not the downward force of your hand. And once you reach the bottom crust, you will need to use a lot of pressure or force to cut through it cleanly, or it will remain attached at the edge and may tear - or else angle the loaf up a bit to slice though that crust diagonally. Crust takes direct pressure against the flat of the crust well and bends before it breaks, but sideways pressure against the thin edge of the crust, poorly - that is why the top and bottom are particularly troublesome to cut.

You can, once the cut gets a little deeper, gently start pulling the slice away from the loaf, to give better access to the area being cut and reduce friction to the area already cut. Obviously, this trick - opening the angle of the cut - works better and/or can be done sooner to a bread with a more flexible crust, since a stiffer crust or crumb may crack a bit under the sideways pull unless it is quite gentle or the cut is already quite deep.

It sounds very fussy, and the first few times it may take some concentration, but it is honestly easier done than said. Stab the crust to break it, and after that use little downward force with smooth even cuts to make sure the bread is sliced with sharpness rather than torn with pressure. You will still gets some crumbs, but it should be a lesser, more manageable amount.

Use an Eezi Slice bread board, (or equivalent), a rigid bread knife, and place a couple of drinks coasters under the loaf the raise the bed and produce a thinner slice. Works for me!

If you place the loaf in the refrigerator for 30 minutes, then it should lower in temperature and harden slightly without drying out too much, though if loaf sits in refrigerator for longer than a few hours, then it will loose moisture and become crumblier (avoid >8 hours chill-time). The hardened bread will be much easier to slice, much like an underipened tomato is much easier to slice than an overipened one. Be sure to use a very sharp knife; ignoring this crucial instruction will result in crumbles. 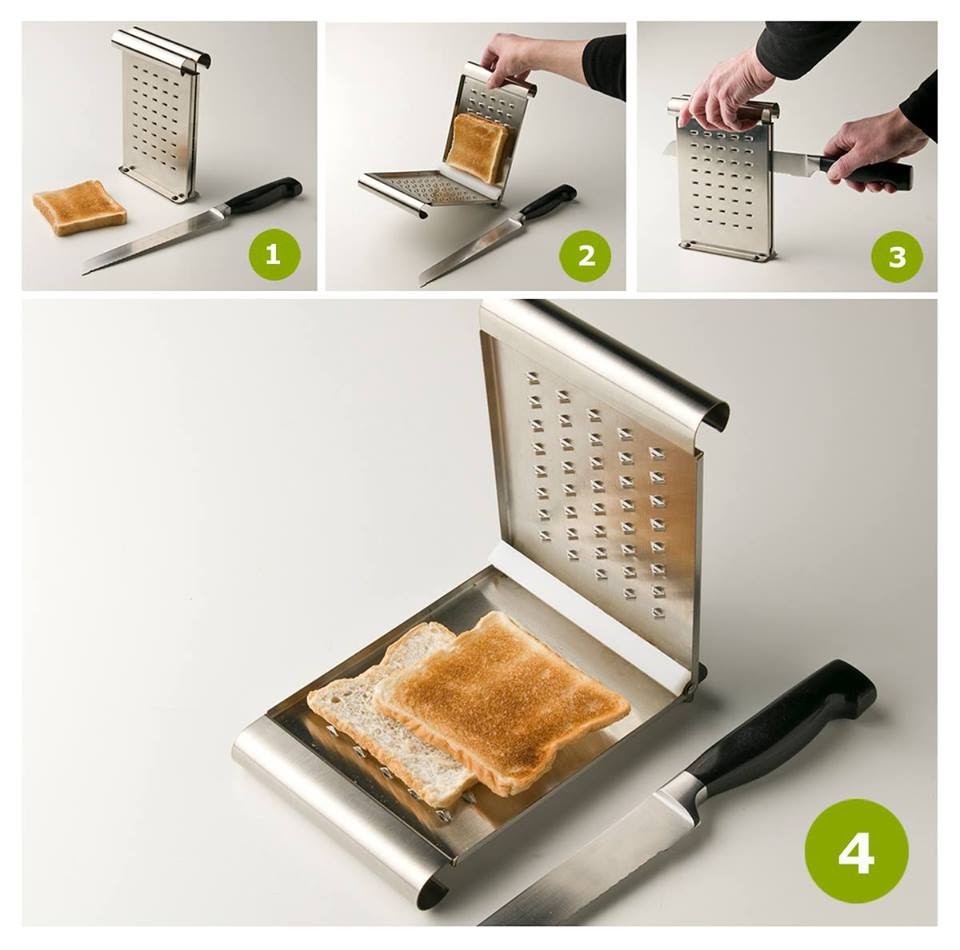 We use this tool called the Nicer Slicer. It used to be big in thee fifties and we this company that makes them now.

Not the answer you're looking for? Browse other questions tagged bread sandwich or ask your own question.

7
Toasting sandwich bread before packing a lunch - when is it appropriate?
2
What are some alternative uses for bread heels?
9
Why use a sandwich press instead of an oven or pan?
2
Is it a known technique to serve hot crispy-crust sandwiches on edge?
12
How long do peanut butter sandwiches last at room temperature?
6
Idiomatic combinations of peanut butter, jelly, and bread
2
How to avoid stiffness and crispness of toasted/oven baked bread sandwiches
4
Is Indian sandwich bread meant to always be grilled or toasted?
1
How long will a peanut butter sandwich last?
3
How to prepare vegetables for a sandwich that can last for several days in a fridge?