Yesterday I cooked a steak and today I cooked another (from the same cute). Today it turned out much better and on reflection it was because it was LESS juicy. Now, I find this surprising as I always thought juicy is something desirable for meat. Also today I added olive oil where yesterday I didn't add anything but spice.

How do you control the level of liquid that comes out of a piece of meat when you bite it? When is it desirable for meat to be juicy?

I cook steak on a George Foreman Grill with slanted grills that are non-stick. I heated it up to 450 F but it always looses temperature quickly so I expected it was 375 when the steak was actually in it.

How do you control the level of liquid that comes out of a piece of meat when you bite it?

Did you rest the second steak, the one you liked better?

Resting meat after cooking is an influential variable in controlling juice release. This article discusses [I am not affiliated with the link].

...as one surface of the meat hits the hot pan (or grill), the juices in that surface are forced away towards the center, increasing the concentration of moisture in the middle of the steak. Once the steak gets flipped over, the same thing happens on the other side. The center of the steak becomes supersaturated with liquid—there's more liquid in there than it can hold on to—so when you slice it open, all that extra liquid pours out. By resting the steaks, you allow all that liquid that was forced out of the edges and into the center time to migrate back out to the edges.

A picture from least rested to most rested steaks, from the article linked above. Cut at 2 1/2 minute intervals. 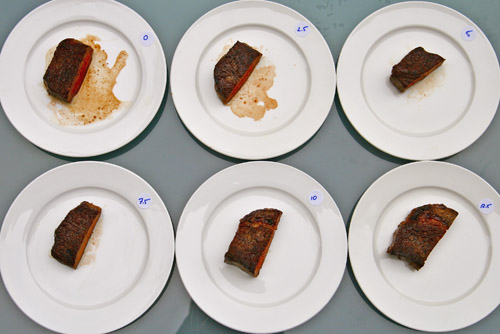 Important distinction: The rested steak is not less juicy, it has the same moisture. It's just that it is better contained in the meat while you eat. I suspect that's what you liked about your second steak.

There could be other factors in your experience: seasoning, grill temps, starting temp of the the cut, etc. But resting is probably the most influential.

I rest my steaks for 7 to 10 minutes with a piece of aluminum foil lightly laying over the top.

How juicy your steak is will always depend on how much moisture you have left in it. A dry rub steak that hasn't been tenderized through marinating will always come out drier than an oiled and moisture prepped one. Also consider moisture levels while cooking. Often alongside a roast a small dish with water will be placed in the oven to create humidity. Also a steady medium temperature will dry out the meat if cooked without liquid whereas a high heat may only sear the outside (thickness is always a factor when cooking meat). In your case a part from marinating or doing an oil rub, I would suggest using tin foil in your George Forman grill - it will keep in some extra juices. Hope this helps :)

Not the answer you're looking for? Browse other questions tagged meat steak or ask your own question.

13
Cooking steak on the grill
3
Getting dog meat to taste as close to steak as possible?
9
What makes a moist steak (or roast)?
2
What is processed meat?
1
interval cooking vs regular cooking meat
2
Brown sediments when frying meat
3
What to do to get tender, edible steak instead of it being rubbery?
1
What do you call a steak separated with fork?
0
What part of meat is mince meat made from?
10
What are those little holes in some meat?