How can I address watery eggs in a microwaved breakfast sandwich?

My blessed wife fixes me batches of breakfast sandwiches consisting of a sandwich thin, some ham and egg whites and freezes them. It's a great breakfast, except for the fact that as it defrosts in the microwave, the egg whites release a huge amount of water and soak the sandwich thin.

It seems to me that the problem has to get solved pre-freeze, but if someone sees another approach, that would be great. Somehow commercial folks get around this with packaged breakfast sandwiches...if anyone has any idea, any help would be appreciated.

I see two possible problems with what you've described --

As for the bread soaking through -- you can also look for alternatives. Bagels and crusty rolls hold up much better to moisture, but bagels in particular can end up really chewy after microwaving. A thicker roll would also have more crumb to absorb moisture.

You can also try spreading something on the bread to prevent the moisture from soaking it (although, it can make for messier eating if the sandwich is dripping). For egg sandwiches, I like hot pepper jellies.

Udated: I was able to sit and talk with my girlfriend about these, acutaly we were eating them as we talked.

Ok this theoretical but here goes.

Rice paper, that's right, Vietnamese rice paper. In Vietnam there is a food, Nam Ninh Hoa, It is fresh lettuce, pork sausage, julienne'd carrots and cucumbers, a bunch of different green, a yellow veg i did get the name of and a piece of rice paper that has been folded and fried. you sit at the table and build these and eat em one after the other. You take a piece of rice paper, the paper regular rice paper that has been place it the fridge and that does something to it, slightly pliable. firm but not brittle. put the other ingredients in it wrap it up, dip in a sauce and eat.

What is relevant is to the OP's question is rice paper. Your wife could just cut them to the size of your sandwich thins and then wrap the egg whites in them. kind of like make an egg white sandwich with the rice paper in place of the bread and then put that into the sandwich and freeze. just eggsperiment with the rice paper. you may have to slightly moisten it, spritz it with water?

all of this is to say my answer to the OP is Rice Paper. try it.

When you microwave the sandwich the moisture from the eggs will be absorbed by the rice paper. presto magico. non runny sandwich. 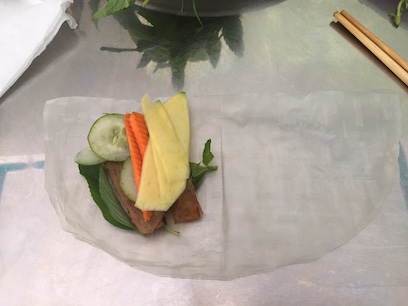 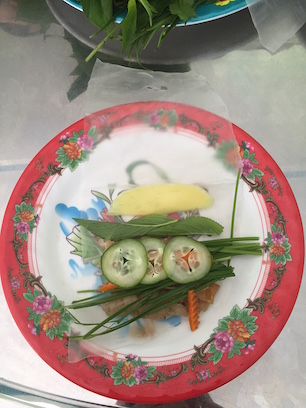 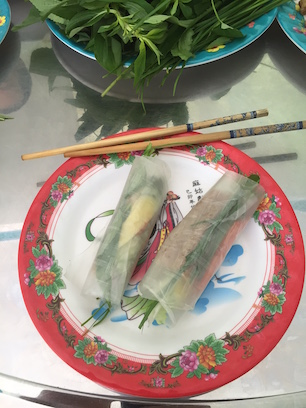 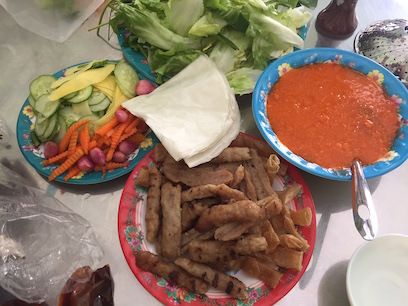 It might help to freeze the egg patty separately from the rest of the sandwich.

This might give you a chance to brush off any ice crystals that form, meaning less water to try and deal with inside the sandwich.

You could either assemble the sandwich when you make it in the morning (with the bonus of being able to heat the elements separately, and possibly discard more water that way), or else after the eggs are frozen, brush off any ice crystals, assemble the sandwich around the frozen egg and put in the freezer again to make your frozen convenience sandwich.

Usually I see more ice crystals when something's been in the freezer longer, one reason why making the sandwiches on a delay might help more (maybe make the egg one one week in advance, assemble the whole sandwiches to freeze with last week's frozen egg?) - but it does work that removing the crystals, brushing the ice off, does dry out the item a bit more.

Also, this might help the egg freeze more quickly - as per Joe's answer - so the trapped water freezes more quickly, does less damage to the egg, and stays in the egg instead of dripping out. The smaller thermal mass means it should cool and freeze a lot quicker than a whole sandwich, where the bread in particular may insulate it for a longer freezing time.

And it might make it easier, working with a sturdy and already frozen egg patty, to dust the egg in cornstarch or wrap it in rice paper or something, if you want another layer to absorb moisture with.

Not the answer you're looking for? Browse other questions tagged eggs microwave egg-whites breakfast or ask your own question.

14
How to do English breakfast at home
11
Keeping scrambled eggs with tomatoes from being too watery
3
Can you make french toast without eggs and gluten?
0
How to prevent watery dippy eggs
2
How long can refrigerated eggs last past their date?
9
How to have poached eggs in “sphere form”?
1
How to make microwaved porridge thicker