I am trying to make a multigrain/white blended bread, I want to break away from using a breadmaker and manually mix it.

My background: I am a 260lb x-military veteran who regularly does 1000 pushups every 3 days, avg bench is 300lbs for several full sets, overhead press and pulls are roughly the same weights.

The point of me saying this - someone suggested I have kneaded the bread too much and too strongly.

Previous loaves were hard and did not rise very much.

Please offer this rookie some advice.

There can be a lot of things happening here, but I will start with some first ideas. 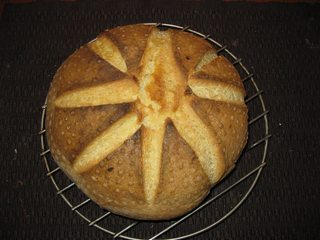 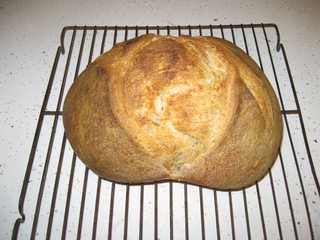 After taking advice to stick to all purpose flour, yeast age, appropriate temperatures and decreasing amount of flour used, and no fear of overkneading anymore; the change was palpable. Here are before and after pictures: 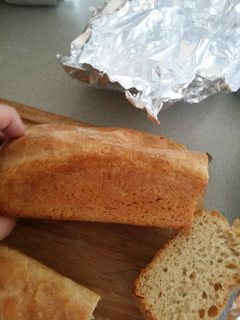 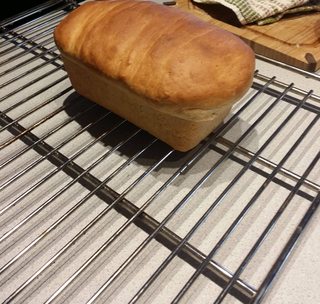 I've got a long way to go but I'm closer to the right track this time. Fluffy loaf, with a nice texture. Density is passable - edible at least. hahaha. Once I've increased my skill with all purpose flour, I'll graduate into multigrain, and hopefully I won't have to bother you guys too much more.

To address your first question, I snapped a few pictures of what will be breakfast buns tomorrow. Note that I used my mixer and a slightly wetter dough, but the pattern stays the same.

A standard bread / yeast dough recipe forms in stages. First the wet and the dry ingredients are just mixed. Some dry pockets might remain and the overall appearance is very lumpy or shaggy: 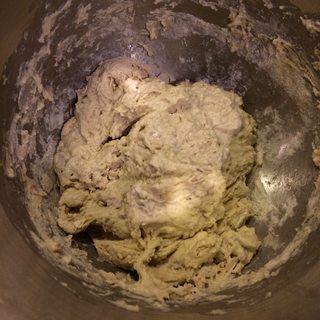 Then, you get a more uniform distribution, but still not a smooth dough: 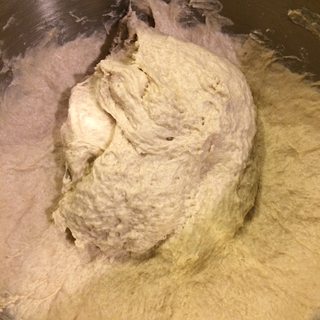 But after a while, you'll notice the dough getting very elastic, smooth and uniform in texture. At that point, the stickiness disappears as well. 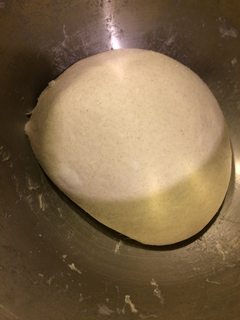 And I mean elastic: 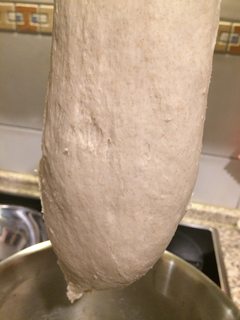 My great-aunt used to say that

A finished dough will leave your hands and bowl clean.1

This means the gluten strands are well-developed and hold together - and will be able to both keep your loaf together during rising and baking and trap the steam inside to give your bread a nice, light texture. A windowpane test will show you a thin, even and slightly translucent dough.

Overkneading means you have kneaded the dough so long that the gluten strands were "torn". That's an irreversible process, but very unlikely to happen if you knead by hand. It happens if you keep kneading after you have reached the "well kneaded" stage. My gut feeling is that the fear of overkneading goes back to the time when stand mixers made their debut in kitchens and bakeries: Machine kneading is usually a lot faster than kneading by hand. So if one used a recipe that required 20 or more minutes of manual kneading and let the machine run for the same time (not watching the dough, just going by the timer), chances were high that the batch would be ruined due to overkneading.

Your recipe uses rather average ratios, I see no need to adjust anything. Of course many bakers go by the "wetter is better" rule, but that produces another type of bread. For a standard sandwich loaf, it's fine.

Being careful with your yeast has been discussed before - rather go for just tepid water and proof a bit longer before scalding your yeast. Similar rules apply for letting the dough rise in too warm environements. Not only can the yeast and the dough texture suffer, but yeast that rises at the upper edge of the temperature range creates more unpleasant by-tastes than yeast in the middle or lower range. The dough in the pictures above is proofing for ten hours in the fridge.

Also note that you should be careful about the amout of flour you use during kneading and shaping. If you have a recipe that gives a range for the amount of flour, it's often advisable to use the lower amount in the dough and keep the remainder for your work surface. This ensures that you don't work too much flour into the dough. (Unless the recipe specifies extra flour for dusting.)

If you come across a somewhat soft and wet dough that is very prone to sticking, switch your kneading technique instead of adding flour: this video gives you a good technique and you can also see how the dough gets more and more smooth, elastic and loses the stickiness. It's also a bit of a workout for the baker.

1 She was talking about doughs like yours. For high-hydration recipes there will be some stickiness.

12
What temperature of water will kill yeast?

5
Dry milk in bread: purpose, and substitutions
2
sourdough bread making-without bakers yeast
1
Why did my French bread neither rise nor bake properly?
9
How does halving a bread recipe impact rising time?
2
How is it that brioche rises so high?
5
What would be the effect of doubling the egg in this bread?
7
Bread has tough, crunchy crust but is underbaked in the middle - how to fix?
0
Adjusting Bread flavor
4
Bread is not rising
1
Coconut bread dough is crumbly and does not come together to knead