Tiny beads/flecks of uncooked dough all through my bread

I'm not sure exactly what aspect of my bread-making is at fault here, but this is close to my tenth loaf, and each one has turned out a bit differently as I've tried to work on my technique to produce better results. A couple of times the loaves have been perfect but the last three have consistently had these little doughy flecks all through the loaf, surrounded by a nice well-cooked texture.

Here is a picture of today's loaf: 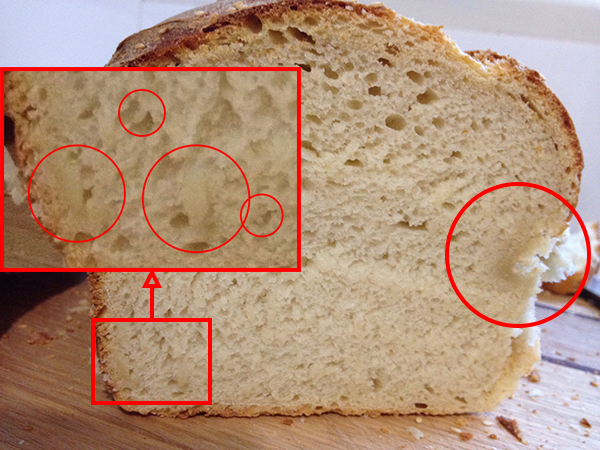 I'm using a crusty white bread mix from Laucke Mills, which is basically bread flour with some kind of bread improver mixed in. Here are the steps I take:

After about 40 minutes, the result is what you see in the picture. On this occasion I tried to put it back and each time I pulled it out, I cut off a test slice to see if the extra time had been the issue. The doughy bits did cook a bit more by the third replacement, but eventually the crust got too brown and hard and I knew it was time for a postmortem.

Would greatly appreciate any advice.

I think the real answer is this: cutting into the loaf too soon is the problem. When it's straight out of the oven it's still very moist and soft inside. A bread knife hooks tiny bits of the bread and squishes them together into beads because it's still very moist and malleable until it's had a chance to cool properly. Once it's cooled, the bread knife will saw through it properly, but until then, it doesn't have enough strength in the texture to properly separate while being cut. On top of that, during the cooling, it's still finishing cooking a bit on the inside, and the cooling allows that process to complete properly.

Edit: I verified this yesterday when I cooked two loaves of bread together. The first loaf I cut into almost immediately after removing it from the oven and encountered the exact problem I described in the original question. Later on after it had cooled I cut further into the bread and there were no beads of dough. In addition, the other loaf, which I gave to someone else and so was able to cool before being cut, was also devoid of doughy beads.

Also, it may have helped that these two loaves were the first two that I forced myself to stop being afraid of stickiness in the dough, and which I improved my kneading to stop squashing the dough so much (it's not a pancake!) and instead tended toward rolling and massaging it, with some lift-and-slap thrown in due to the stickiness. The stickiness eventually lessened, especially as I added a little more flour over time, and the texture of the final dough ball was fine.

Keeping to the very simple - if the crust is too brown and the interior is not cooked, the oven is too hot. Reduce temperature, increase time (or reduce loaf cross section; thinner loaves cook faster.) Starting hot and turning down after 20 minutes is a common approach.

Is the water in the pan boiling off within 15 minutes or so? if not, either remove the water pan (carefully, it's easy to get burned with a pan full of boiling water) after that time or reduce the amount of water in it until it does boil dry in 15-20 minutes.

You can check the loaf by removing it from the pan and "tapping on the bottom and hearing it sound hollow." If it's not there, put it in for another 5-10 minutes and check again. Cutting the loaf is going to complicate any further baking considerably.

24
How can I create steam in a normal oven to promote bread oven spring?