The Douglas Baldwin's "A Practical Guide to Sous Vide Cooking" has charts for sous vide cooking times. Unintuitive to me, cooking times are drastically shorter for spheres and cylinders than slabs. Does anybody have an explanation? 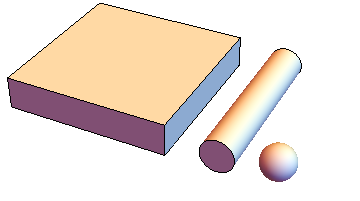 There's your slab, cylinder, and sphere with the same thickness.

The time to cook does depend on thickness, since that's the distance the heat has to travel from the surface to the interior. But it also depends on the ratio of surface area to volume (and thus shape): the more surface area per volume you have, the more area you have to transfer heat compared to the amount of heat you need to transfer to fully heat the meat.

Of course, the typical thicknesses of the various shapes are different, so it's not all that meaningful to compare things at constant thickness. A slab might be a fish filet, a steak steak, or many smaller pieces of meat packaged together in a bag - nothing all that thick, unless it's a really full bag. A cylinder might be a pork tenderloin or a decent approximation of a chicken breast - still not that thick. A sphere might be a single steak medallion, or maybe an okay approximation of a large pork shoulder - a pretty wide range.

That said, in the end we often think about things in terms of the amount of meat, i.e. the volume. A 2 by 10 by 10 cm slab, a 5 cm diameter 10 cm long cylinder, and a 7.25 cm radius sphere all have about the same volume. According to that table, the slab needs 1.25 hours, the cylinder needs 2.75 hours, and the sphere needs 4 hours. So if you were thinking of similar quantities of meat, perhaps that matches your intuition better.

I think it's possible that the chart was assuming different volumes for the different shapes, since only one dimension (thickness, which is usually the thinnest dimension) was listed on the chart.

So, for example, given a piece with a centimeter's thickness, the resulting sphere is a little nugget of one centimeter in all directions, with no wiggle-room, since spheres are symmetrical. A cylinder of the same thickness has its diameter defined, since width and thickness are the same in a cylinder, even if its length can be more variable - so a cylinder one centimeter thick, can easily be three centimeters long, and thus starts with about three times the volume of it's spherical "counterpart".

And then there's the slab. With only the thickness given, it can be considerably larger in both length and width. Looking at a one-centimeter thickness, we can start at three centimeters wide to match our previous three long, and three wide to make a flat slab instead of a strip, for nine times the volume of a one-centimeter sphere and three times the volume of a one-by-three centimeter cylinder.

As rumstscho's comment mentions, the difference must be rather visible for the shape to be considered a cylinder rather than a sphere, or actually a strip vs a cube (give or take irregularities and/or rounded edges), so it must have a longer length to qualify. Same for a slab rather than a cylinder - it must be visibly larger in two dimensions, or else it will look more like a strip or chunk (square-ish or spherical).

It is rather intuitive that a larger piece, with more volume and more mass, will take longer to cook, longer for the temperature to equalize form the edges in. Of course, that makes the "intuitive" problem the chart setup, which is comparing pieces of rather different sizes based on thickness alone - it might make a bit of sense for the rate of diffusion to be based on the thinnest dimension, but the results are, as you said, counter-intuitive since I didn't see anything mentioning that assumption. The time should be the same if the other variables like absolute size didn't matter, but clearly they have to be taken into account somehow. It might have made more sense to compare profiles for pieces of the same volume, or make a chart for each shape, or just mention the assumptions being made or something.

For the same volume, the same mass, I would expect a thin flat slab to heat up much faster, and a sphere or cube to heat slower, because of the ratio of surface area to volume. But once we're talking different amounts of mass in each shape, yes, I would expect the same volume of food to cook faster as diced small cubes, as opposed to cut into longer strips or left as fewer, wider planks, simply because the pieces are smaller and there are more cuts, therefore more surface area.

To those answers and comments speculating that Baldwin is assuming a larger volume for slabs and cylinders, I suppose that's correct, as the equations in general assume an infinite volume. (And the reason why the equations make these assumptions is because the math gets really hard, really fast if you want to model more complex shapes.) Obviously, real food doesn't have infinite volumes, so Baldwin's calculations should only be taken as an approximation.

There are methods using the equations to approximate other shapes, which Baldwin mentions briefly. Effectively, what one does is assume a non-integer number of dimensions for heat travel. For example, an infinite square prism (like a cylinder, only with square sides) would have more than the single dimension of heat travel assumed by the slab, but less than the equal travel from all directions in two dimensions assumed by the cylinder (because of the corners of the square, which means heat will take longer to travel toward the center). So, one can plug in "1.7 dimensions" and get something that's closer to a cylinder than a slab and get a number that's a reasonable approximation to how other shapes behave.

Not the answer you're looking for? Browse other questions tagged sous-vide or ask your own question.

7
Does shape affect pasteurization time when cooking sous vide?
6
Sous vide over cooking toughens meat?
6
Dry sous vide steak
2
How long to cook pork chops sous vide?
2
Why don't we need to ice-bathe all leftovers before refrigeration?
4
Beef Steaks : Cooking older-grade meat (C-Grade)
0
What determines the length of sous vide cooking time?
5
Why and how does the egg white stick to its shell when cooked sous vide?
2
Why does Anova sous vide tell me to cook salmon to unsafe temperatures
1
Is it safe to sous vide chicken to less than 74°C for a longer amount of time?