There are white spots of mould in the blue mould on the outside of my blue cheese. Is this normal?

Are you able to provide a photo of when you cut into the cheese? It’s looking pretty good!!

The white mould growing is fine, as white mould is not bad for you. It is the dark mould that you need to be more concerned about. Just wipe the mould off with a cloth, do not salt the cheese. 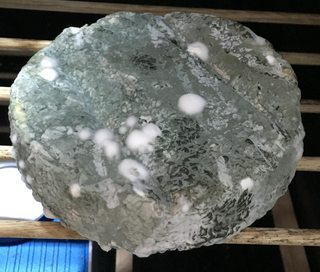 Browse other questions tagged cheese or ask your own question.

19
Are you supposed to eat the rind of Brie cheese?
8
Are the white crystals on my American Cheese safe to eat?
10
Can I eat cheese which has been “infected” with blue cheese mold?
5
Baking granbarksost (spruce bark cheese) (Brie) with little mould
2
I forgot the milk in the mac and cheese
0
Blue Cheese has gone bad?