Was too much oil used, or not enough when seasoning?

I went about trying to reseason my cast-iron pan yesterday. I used some recycled canola oil at 400F for 60 minutes right-side up. After that I checked on it (before it was completely cooled), and noticed that most of the surface was a matte black with a web of a glossy material.

I was under the assumption that the surface was supposed to be a uniform color, so I put it in for another 30 minutes, thinking that I had pulled it out too early. When I checked on it afterwards, I noticed that more of the surface area was glossy, and not matte. So before I threw it in for more time or added more oil, I figured I'd ask here.

Should I strip the surface and do something different? Should I use brand new flaxseed oil instead of recycled canola oil? Should I flip it upside-down and set the oven to 350F? 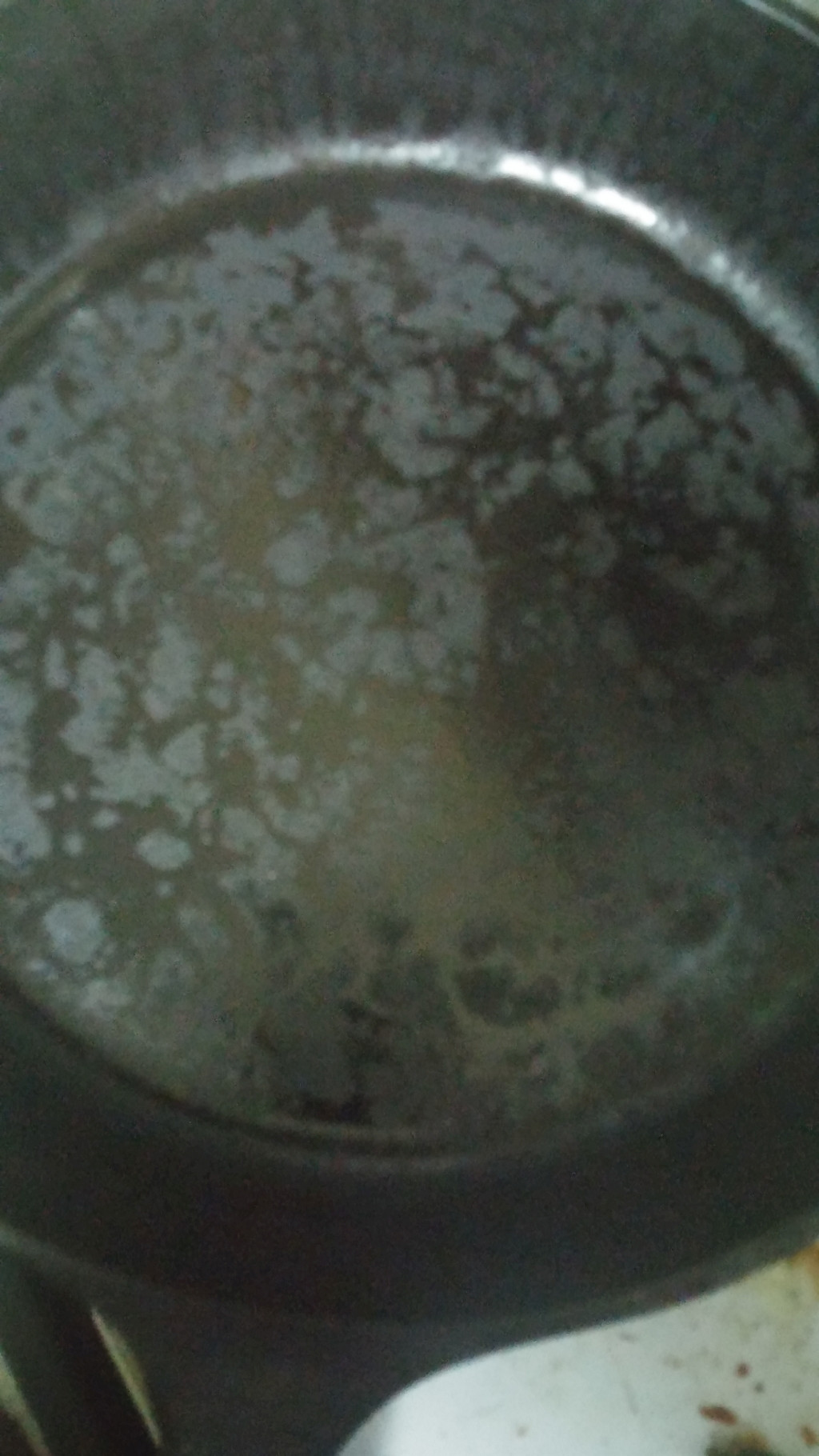 You used far far too much oil. And you definitely used the wrong oil.

Ever notice how oil moves around the surface when you pour some in a hot pan? It doesn't spread out uniformly flat like water does but seems to be moving in a changing pattern. I don't know what this oil fluid dynamics is called but I'm sure you've seen this too.

When you oiled your pan, this pattern is what started to form and then from the high heat - and it doesn't take long - it baked on with thicker and thinner layers of hardened oil. Rather than trying to bake on a layer of fat in one sitting, you'd do better to laminate your seasoning so it lasts.

What you want to use is a "drying oil" that will form a hard slick film that fried food will slide off with the addition of a little cooking oil. What's the drying oil painters use? Linseed oil. The food grade and safe equivalent is 100% pure unadulterated flax oil. So your second choice is what you need to use.

But remember, you should laminate your seasoning. By repeatedly adding a thin layer of flaxseed oil and then heating it for an hour, letting it cool for a couple and repeating this 4 or 5 times, you'll end up with an almost glass-like smooth finish to your pan that's more nonstick than Teflon could be.

It's important when you coat your pan for seasoning, you wipe off any excess before baking it. You want a barely there film. Why? Because doing so, enables the oil to absorb oxygen in the air evenly (a thicker layer would prevent oxygen reaching the oil next to the pan's surface) which is necessary. It also lets the iron function as a catalyst that speeds the process. What you get is polymerization of the flaxseed oil (the actual chemical change) from a liquid to a hard solid, not a thick sticky layer of half-baked oil.

Before you can properly season your pan though, you'll need to remove that previous attempt. The easiest method is to place your pan, face down, in a self-cleaning oven to thoroughly burn the old oil off. Then, you can brush off the ash, wipe your pan clean and begin seasoning it correctly.

Just a tip about maintaining the finish. Use your pan for frying only, not stewing or ever cooking with acidic foods. The best way to clean residue on your pan after frying is with salt and oil. I scrape the worse off and then add about 1/2 teaspoon oil to my pan and pour some ordinary table salt on the oil. With a bunched up paper towel, I use the lubricated salt to scrub off any food residue. The salt doesn't scratch the seasoned finishing and really cleans well. I usually rinse it under water before drying the pan and putting it on the heated element just to be sure it's completely dry.

6
Rodent droppings on cast-iron frying pan
2
Have I over- or under-cleaned my cast iron dutch oven?
7
Avoiding carbon on cast-iron when cooking hotter than usual
4
Skillet rust (?) and next steps with regard to seasoning
1
Will seasoning cast iron skillet with vegetable oil leave trans fats?
0
Cast iron pan rusts during seasoning
4
When seasoning a cast-iron pan, should you let the oil smoke?