Why do I have lumps in my caramel? (NOT crystallized sugar.)

There are a lot of caramel questions. Hopefully I'm not repeating anyone...

I've made caramel sauce several times with the recipe from Sally's Baking Addiction. (But using a different beginning procedure: Dissolve sugar in ~1/2 cup of water, not stirring. Put the lid on for a few minutes to clean the sides. After that it's the same.) For some reason, though, whenever I make it I end up with lots of tiny lumps suspended in my caramel. As I mention in the title, these lumps are not little sugar crystals. I've had my caramel crystallize before, and this is very different. They're soft, for one thing, and so I'm not sure what's happening.

At first I thought the little lumps were just air bubbles. That's what they look like. But they actually have some body to them. It's almost like I have tiny bits of cooked egg or something (which is obviously impossible.) They have a gelatinous quality. So my guess is that the cream is doing something weird? Flavor is good, thickness is good, everything is good except these stupid little lumps.

Does anyone know what's happening, and how I can make it stop...? I'm about to take an immersion blender to the mess and let God sort it out.

EDIT/UPDATE: So... I now have a theory that I tend to get my caramel so dark (more of a crimson/burnt sienna than an amber. Probably around 380F) that some of the dairy solids in the butter (maybe even the cream?) cook/coagulate as soon as I add it, leading to those gelatinous lumps. I haven't had the time (or a good reason) to try cooling my syrup with some water before I add the butter yet, but as I said in the original question, this definitely isn't sugar crystallization, and it's been a persistent problem. When my mom's made the recipe before, she didn't have the problem, but she's also terrified of burning her caramel and tends to add the butter much, much sooner.

I've noticed brown specks when I've made chewy caramels and toffee as well, so I'm wondering if cooked and browned dairy solids are my whole problem here.

I have failed many times to make that kind of recipes. They contain false direction, especially when it comes to melt the sugar.

Here is a quote which helps me. It's not accurate but you'll get the idea.

In the recipe you provide, the author stirs the sugar while it cooks. That's a bad idea.

Sugar has a very complex crystal structure and it's not very stable when you heat it. Thus if you disturbed the crystals, you'll end up with lumps. During the last step (the one with the cream), it will emphasize those lumps.

So you need to refrain to stir during the melting step. If you have sugar sticking on the side of the pan, you could use a brush with some water. And again, do not stir.

My cream's been curdling because I get my syrup too hot and too dark.

Most caramel recipes recommend heating the initial sugar syrup to no more than 380 degrees, and for the most part, people will get scared and pull it off the heat and add their cream before it even gets close to 380. I know I did when I first started! But without realizing it, I moved beyond those fears, enjoying progressively darker caramels.

However, one thing I was not aware of (and should have learned sooner) is that as sugar decomposes further, creating darker caramel, it becomes more acidic. Maybe not acidic enough in its own right to curdle heavy cream, but heat accentuates the curdling effect of acidity on casein and it's friends. I currently have a jar of caramel "sauce" in my fridge with a layer of dark caramel liquid on the bottom, and lighter, solid dulce de Leche reminiscent curds on top.

To which I said "the FRIG is going on???" I busted out the thermometer and actually added my cream at a wussy 380. It's wayyyy too sweet for my taste, but only a few shreds of cooked/curdled cream floated to the top. That seems significant.

While I can't find a decent chart that measures the pH of caramel at various stages of decomposition, I found lots of references to increasing acidity, and even to milk curdling as a result. Cream is more stable than milk, but the anecdotal stuff I found is still relatable. I have tiny curds instead of big ones, but that doesn't change their nature.

Easy fixes? Don't cook my sugar so hot is the obvious. One idea I haven't tried yet is to make my caramel with a pinch of baking soda, although I might not like the results as much. (I'd try and see, but two batches of caramel in 24 hours is enough for me)

The reason the answer wasn't obvious to anyone is because the recipe I started with never discusses temperature, so I never checked mine, and that's what made my situation unusual. I was trying to make a caramel sauce with a sugar solution approaching baker's caramel.

The moral of this story: if you're EVER following a recipe that instructs you to eyeball something, and then it comes out wrong, check your eyeballs. That means take precise measurements of what you're currently eyeballing and compare to accepted standards in other recipes.

Eg, I should have measured the temperature of my caramel syrup when I added the cream and took it off the heat, as well as noting my recipe's proportions, then compared to the temperatures and proportions of other accepted recipes to see how mine was different.

I could have saved myself a LOT of curdled caramel if I'd realized that 400 degrees is not caramel sauce standard sooner.

kitukwfyer I looked at the photos on the recipe site you gave and her caramel sauce has large and small lumps in it. The only thing I can think of when the cream was added to the caramelized sugar and butter mixture, it cooled the mixture enough that tiny secs of butter congealed in it. On the recipe site, it looks Ike hers are larger so maybe you stirred yours in more thorough.

Personally, I find it can be tricky melting and caramelizing sugar evenly. Her method is also liable to spattering hot caramel on the stove. Sugar can be caramelized cooking with some water first and it's safer. I'm not suggesting using this recipe - How to Make an Easy Caramel Sauce but read it over and see what you think of the method.

You may want to add some corn syrup. Sugar is made up of complex sugar. When you heat it it splits into simple sugar. The lumps are caused by those sugars recrystalizing. Corn syrup is already an inert sugar and keeps the crystals from reforming. Definitely do not stir. Allow the sugar to melt and get a nice amber color. Brush down the side with water if you see crystals (also lids work to keep the crystals under control by using steam to redissolve any crystals). Successful caramel is strictly due to good crystal management. If you add cream, I warm it up a bit. I think cream works better than milk. It’s sturdier at higher temps. Caramel is at 235-240 F. Hang in there, it took me a whole weekend and about 3 lbs of sugar to get it figured out! 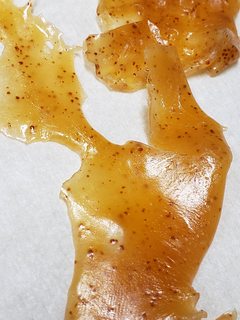 I believe it's the milk solids from the butter/ cream. I clarified 5lbs of butter and used all the milk solids + clarified butter in place of the regular butter in my recipe. Never had this before and that's the only thing I tried differently this time. It's oh so delicious; I don't even care about the flecks, its almost like flavor confetti.

Not the answer you're looking for? Browse other questions tagged candy caramel or ask your own question.

4
Suggestions for caramel from dark brown (muscovado) sugar?
3
Why does boiling cream have such a drastic effect on my salted caramel?
8
How to make caramel sauce that doesn't taste bitter?
4
Is the caramel recipe wrong, or is it my technique?
4
Why does my caramel sauce fail?
5
How can I make caramel that will hold its shape, without using refined sugar?
5
My Cream Pull Candy doesn't always cream
6
Caramel made with coconut milk tastes burnt
0
Why caramel crystallize after adding butter?
0
What is a good technique for making a very small amount of caramel?