Bread cracks in the oven

I'm having trouble with my hamburger buns cracking in the oven. 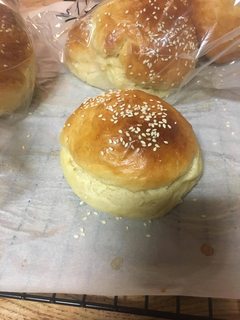 In this photo you can see a a bun with the crust cap cracking, isolating the bottom portion and exposing the crumbs. I used to have Hamilton Beach mixer for kneading and never had any issues. I set the Hamilton Beach mixer on speed 4 for 10 minutes. But now I got a KitchenAid Artisan mixer, and am having trouble with the exact same recipe.

I first tried to follow the KitchenAid instructions to knead only for two minutes at speed 3 which didn't work out well and the dough failed the window pane test. I then searched and found some advice to knead at speed 4 for about 10 minutes. I did and my dough passed the window pane test but somehow after rising during the shaping the crust/surface of the buns show a non-smooth surface (happens a lot more on whole wheat). What are some of the reasons this happens? The same recipe works perfectly with the Hamilton Beach mixer. Any advice on the technicalities would be appreciated.

I've read What causes the crown of the bread to crack during baking? (and I appreciate people citing that). But that question is about a loaf, and it's normal for loaves to crack like that, and normal to score loaves. Hamburger buns, in contrast, are not generally scored, and the recipe I'm making is not supposed to require it. It's worked fine without scoring sometimes, so there's something else going wrong besides the lack of scoring.

Your picture makes me want to say that it's a classic case of underproofing, but... You also mixed that dough at a pretty high speed. I think you may have over-developed the gluten. Sometimes if the gluten is too tight, it won't be stretchy enough to accommodate proofing and oven spring, which can lead to a rough surface during proofing and ripping while baking. This is more frequently a problem for buns since their shape requires them to be molded tighter than a loaf would normally be, and their small size means that they rise faster than the gluten can relax. You might have better luck only mixing for the recommended time on the lower speed, and then folding it once or twice during the rising time.

Possibly three reasons that I can think of:

6
What causes the crown of the bread to crack during baking?

5
How can I tell when my fat is sufficiently creamed?
7
How accurate is the window pane test? (breadmaking)
9
Tiny beads/flecks of uncooked dough all through my bread
4
How do I knead this dough by hand?
1
Why was my bread mix really dry and take ages to knead properly?
9
Why is my baguette type bread coming out almost flat?
5
Sourdough bread uncooked from inside
1
Sourdough bread crust will not rip open
0
How can I make my baguette dough softer and more elastic?