What went wrong with this cake?

This is an olive oil cake (with gluten free flour). It baked in this completely crazy way. The entire cake lifted up and there was a large bubble under the cake that shifted the batter to the sides before it cooked.

Here's how it cooked in the pan with half removed (we used a conventional oven, the toaster oven is just for scale): 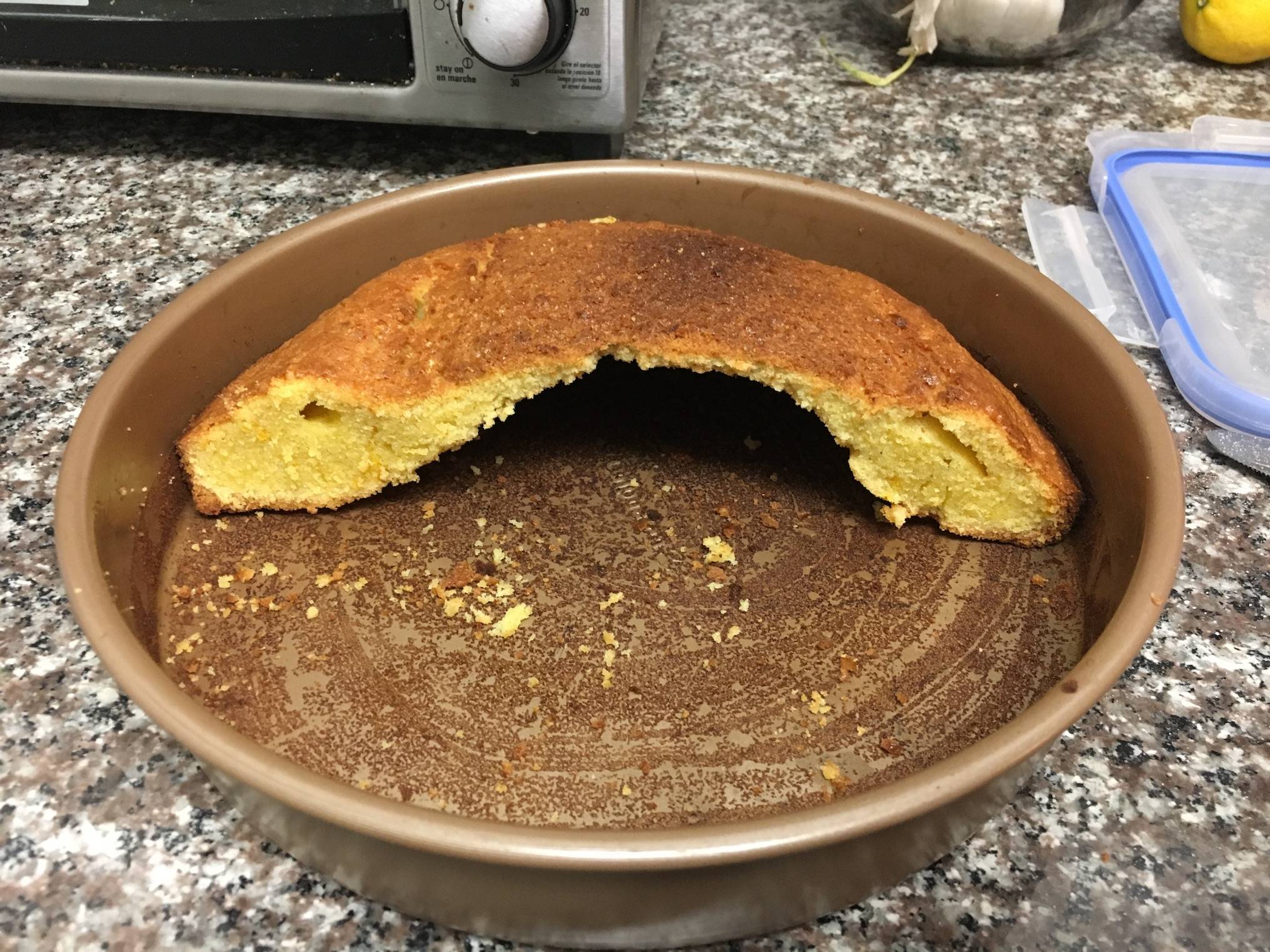 Turned the cake up in this following photo -- you are looking at the bottom of the cake this time: 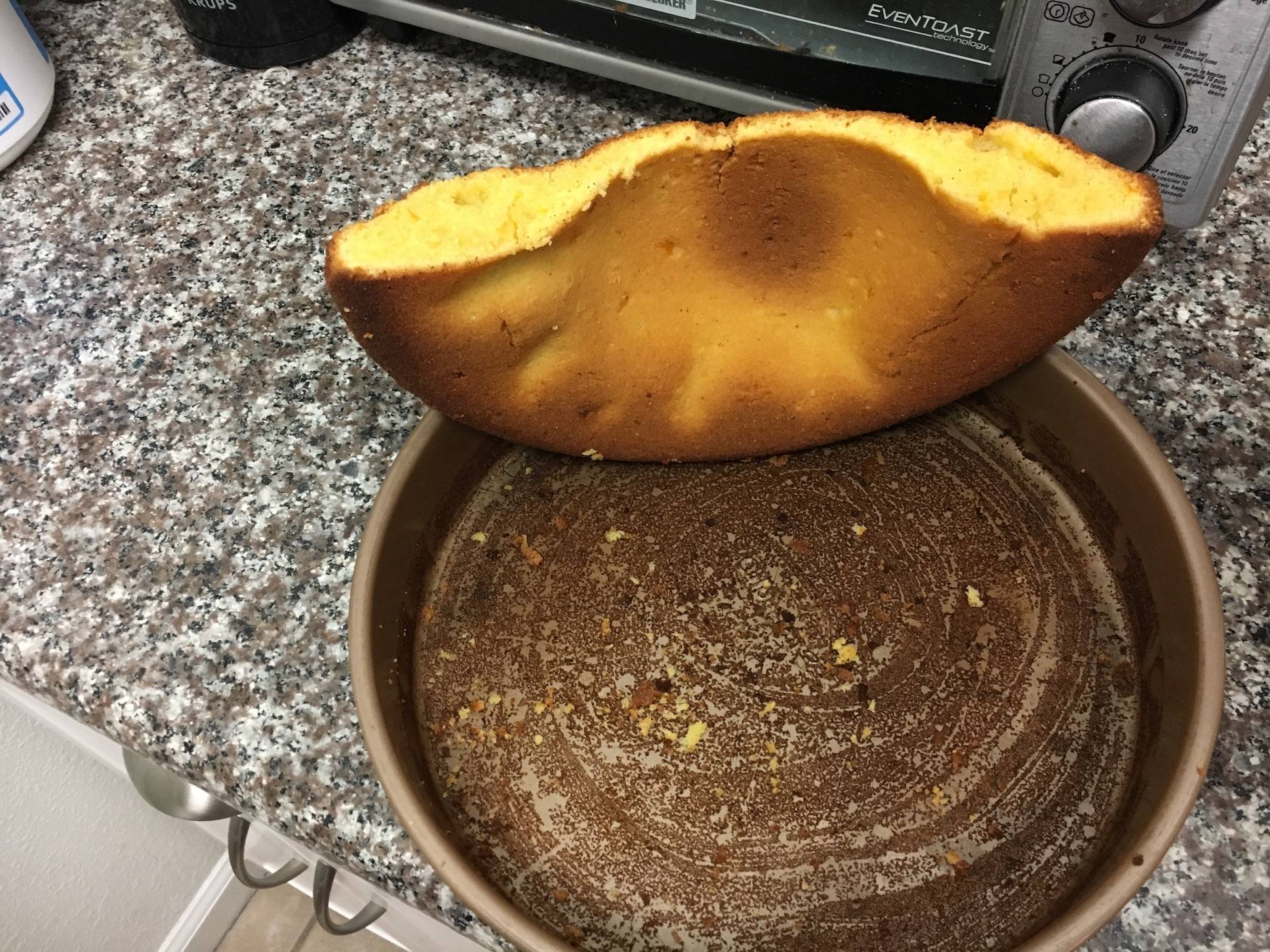 A couple of questions:

I'd lower the temperature. You'll have to experiment. I think what happened is that the bottom quickly cooked and sealed. As your liquid ingredients turned to steam an air pocket was created, which would further slow the cooking of the middle.The still fluid batter would flow to the sides and provide more liquid, as the bottom rose.

This looks very much like a bad recipe, which has trouble leavening.

You say you used gluten-free flour. The problem is that there is not a gluten free flour, there are multiple mixes and none behaves like the others (and also none behaves like standard wheat flour). So this is the most likely culprit. Try using a recipe which is made for your brand of gluten-free flour or directs you how to make your own mixture out of specified starches and binders, not one which just says "gluten-free flour". Don't use baking recipes meant for standard flour with gluten-free - the results are patchy, if they work at all.

If you insist on continuing with this recipe and this flour, try a bit less leavening agent (to prevent the too strong gas production) and more fat (to make the dough more tender and hope that the bubbles will be able to move throughout the dough). If you see it doming during baking, just go in with a fork and make some holes to release the steam. Still, this is mostly a shot in the dark. Tweaking the recipe to a working state (or kinda-working) will take several rounds of trial and error, if it works.

It looks to me like the "huge bubble" was not one bubble but lots of little bubbles like you would get from the action of the leavening agent (maybe baking powder). That would be normal, unless the leavening action was excessive (sounds like maybe that was the case if it looked like a huge bubble in the middle of the cake) and produced too much gas for the strength of the solid structure of the cake to support. That would cause the cake to collapse in the middle as it cooled (or maybe even before). Whatever the cause, it looks like your cake was structurally too weak for the amount of leavening.

Not sure where you got your recipe, or whether you followed it exactly ... did you make any minor modifications? Was your recipe designed to be specifically gluten-free, or did you take a standard recipe and just substitute in gluten free flour?

Cake recipes are super touchy, and reside in the fine line between too fluffy and not fluffy enough; too tender and not quite tender enough. So they don't tolerate a lot of tweaking. I can only imagine gluten free cake recipes must be even more sensitive.

Very often when I get "creative" [ha ha] & try to make up my own cake recipes, this sort of thing happens to them. A couple possible causes could be too much of the wet ingredients in the batter or too much leavening.

It's suggested that when baking cake with gluten free flour, sift all of your dry ingredients together, also use a binder (xanthan gum) and don't over mix the batter.

Couple of reasons, either you kept it on a very high temperature, or the door of OTG was opened repeatedly during the baking time or your baking powder was expired. Anything above if true, the cake will sink.

Not the answer you're looking for? Browse other questions tagged gluten-free rising or ask your own question.

2
Using fresh compressed cake yeast in bread machine
1
Flourless cookies form "skin" that seals in moisture
5
Baking bread/cake yields different results than expected
2
Baked goods with Teff flour turn out gritty. How can I prevent this?
2
Tapioca pizza crust is undercooked?
7
Choux pastry, general questions with gluten free flour
1
Gluten-free Carrot Cake batter mixed with normal Carrot Cake batter
2
how to get maximum amount of rise for shaped pizza
0
I get a smaller volume loaf from mixing sourdough in mixer - what am I doing wrong?