How did people transport food before aluminium foil was invented?

I know this question does not concern cooking, however I wondered how people transported their food before aluminium foil was invented (circa 1900, which is not too long ago).

Did people in the middle ages only carry preserved food with them on long journeys? Did they transport it in cloth or ceramic?

This question is really naive, but I want a definite answer.

A complete answer to this question would require writing a primer on the history of food preservation and transport. I'm not going to write one. Instead, I'll focus on the most common methods of personal food transportation -- (that is, snacks, meals, and travel food) in the middle ages.

Transporting foods across the village would have been a daily or weekly event in most medieval European villages, because frequently villages had a common shared oven. This oven belonged to the baker or to the village council, and after the bread was done, the residual oven heat was used to bake beans, casseroles, pot roasts and other slow-cook dishes. Generally, the ceramic vessels for such dishes had lids (which were sometimes sealed with flour paste to retain moisture), and transported unopened in a basket.

For road food, one of the most common methods was as pies. Contrary to modern hand-pies with flaky delicious crust, for many medieval pies the crust was thick, dense, and inedible. The crust wasn't part of the food, it was a sealed wrapper to protect it (with indifferent success); you broke open the crust with a knife and ate the insides with a spoon, tossing the crust to the pigs or dogs (or the very poor).

Another method of sealing food was "potting", which involved putting meat, seafood, or other foods in a small pot and covering the top with a thick layer of fat or (for expensive dishes) wax. The potted food would be cooked with the sealing layer on top, and thus survive for a couple of days until bacteria penetrated the protective grease layer.

Book References (where I got most of this):

In addition of FuzzyChef's answer: Some cheaper (?) but less durable (in terms of re-using) food packaging mostly without cheating by curing:

In south-east Asia and central America even today's people use big leaves instead of aluminium foil to wrap their food1: For example, bánh chưng, a (actually very perishable) Vietnamese new year's rice cake, is wrapped in banana leaves and can be stored up to 2 weeks unrefrigerated. Apparently, leaves of Terminalia catappa and some particular Phrynium can be used as well.

Some Mesoamerican dishes (like (naca)tamale) are wrapped in corn husks. 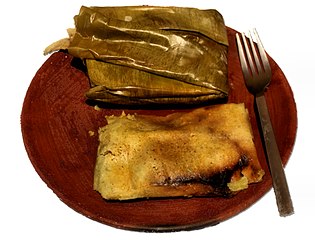 Sasazushi ("Sushi wrapped in a bamboo leaf"), a type of oshizushi, is a pressed sushi from the Kansai region: 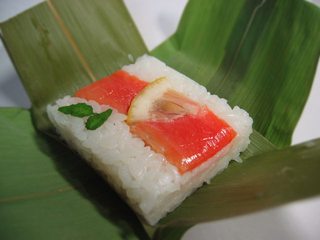 Does rice straw count (granted, natto is fermented while being wrapped...)?

Historically, nattō was made by storing the steamed soybeans in rice straw, which naturally contains B. subtilis natto. The soybeans were packed in straw and left to ferment. 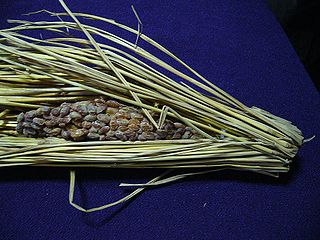 Century eggs and some kind of salted duck eggs are wrapped into a clay-mixture. Beside curing, the eggs are less prone to break. 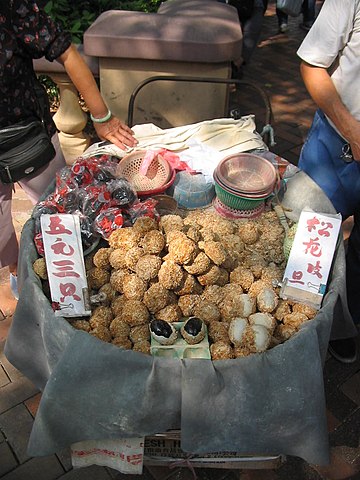 gourds, calabashes in particular, are used as beverage and food containers. Animal skins (stomach, bladder). treated with saps and resins, were used as a beverage container, like bota bags, colambres, and waterskins. 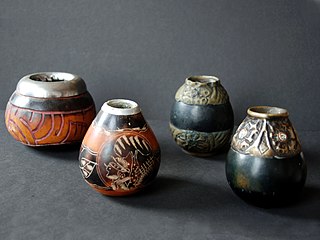 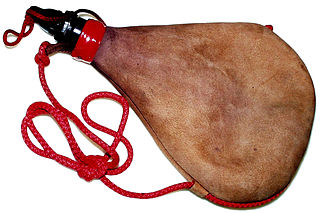 Even ostrich eggshells dated to 60000 years ago are found to be functional.

Sounds stupid: Food stays fresh if kept alive. At least in today's Vietnam, in rural areas it's common that you buy chickens, fish, frogs etc. alive if you don't intend to cook immediately. When needed, you'll slaughter the (rather small) livestock at home. That's a way to circumvent the famous 2-hour-rule.

Wrapping food with more food (that is meant to be eaten)

As Paulb pointed out in a comment, potentially melting foodstuffs like chocolate can be dipped into a sugary syrup which then harden into a candy shell.

This reminds me of jelly beans or freeze dried fruits in chocolate (a very modern class of confectionery) coated in a thin layer of edible wax (e.g. carnauba wax, beeswax). Chocolate truffles also hold their booze or ganache in chocolate shells.

Burrata is a fresh Italian cheese made from mozzarella and cream. The outer shell is solid mozzarella, while the inside contains stracciatella and cream, giving it an unusual, soft texture. It is also defined by some sources as an outer shell of mozzarella filled with butter or a mixture of butter and sugar. [...] The finished burrata is traditionally wrapped in the leaves of asphodel. [...] When the burrata is sliced open, a spurt of thickened cream flows out. (Source, emphasis mine) 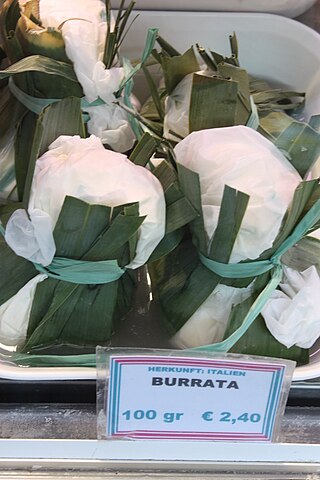 Do edible moldy cheese rinds with a very soft cheese center count as wrapping? Imagine the mess if this was a cream cheese without the rind! Drawback: Curing is involved. 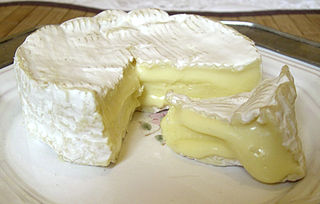 Besides the pie crust mentioned by Fuzzy Chef: I don't think dry aging / hanging meat is a modern invention. When meat is dry aged, the hard outer shell covered in mold is discarded. Same with some cheese rind.2

1 Wrapping with leaves is not exclusively done for packaging purposes but for taste as well.
2 Contrary to the putrid meat layer, clean non-waxed cheese rind have a second use as a umami bomb in stocks.
Share
Improve this answer
edited Apr 19, 2017 at 15:33
answered Apr 18, 2017 at 19:24

Non-preserved food in aluminium foil is gonna spoil almost the same as if you didn't put it in foil ...

If you just want to keep the food clean, you can just use any kind of food safe container that fits - a corked glass or bottle, a tiffin, a leather hose, a sealed amphora, whatever.

If a wrapping material is desired, paper and cloth have been there for literal ages - and if you want them reasonably moisture proof, simply treat them with wax and/or oil.

If keeping the food warm is a priority, using a container and wrapping it with a lot of cloth/wool will provide great heat insulation.

The practice of oiling parchment or paper in order to make it semi-translucent or moisture-proof goes back at least to the middle ages. Paper impregnated or coated with purified beeswax was widely used throughout the 19th century to retain or exclude moisture, or to wrap odorous products.

A stinky fish certainly qualifies as an odorous product...

If you're thinking more in terms of storing sandwiches and other small items for short periods, aluminium foil directly replaced waxed paper and oiled parchment.

For longer-term storage, barrels were used where we might buy tinned food today. A well-constructed barrel is completely air- and water-tight (otherwise they wouldn't be used for brewing). On a long journey where buying food locally was not an option, the party would buy food stored in barrels, and open each barrel as needed. Typically this would be for sea journeys, or for travel in wilderness where there simply wasn't anyone to buy food from.

This was necessarily limited to food which could easily be packed in barrels, of course, and without refrigeration the food also needed to survive at room temperature without spoiling. Meat and fish would be cured, for example, and vegetables would be pickled. Older varieties of apples keep for months if properly stored, and butter does not require refrigeration. Some other food simply did not need to be prepared ahead of time - if you have sacks of flour then you can bake your own bread as you go, for example.

In general though, if you were travelling then you were most likely some kind of trader or drover, and you had money. In that case any locals would be more than happy to let you buy a meal from them!

There are a couple of methods that I am aware of as well. First, if you had to travel a great distance, you would carry foods that are less likey to spoil. It would depend on the part of the world were talking about but cured meats, cheeses, some breads all worked very well. As for medieval Tupperware, "waxed" or "oiled" cloths and such worked out ok. Ceramic dishes did well, and nothing beats a burlap sack of grain.

However, if I'm not mistaken it was more about keeping foods dry and free of moisture then anything else, and again only certain foods.

Then there was the "bread". Unlike what we think of today, a traveling bread would have been hard, crusty, dry, and maybe even salty. The most recent thing I can think of is Hard-Tac (not medieval but if you ever try to eat the stuff you'll get the idea).

In essence, you ate the food you could hunt. Small game mostly, and you had a store of foods that was less likely to spoil. Keep in mind that back then you wouldn't really "need" food the way we do now. The country side was full of food sources (it is today) and the people knew how to exploit that (looking for roots, tubers, small game, and the like).

If you set off on a 6 month trip, then you might take 1-2 weeks worth of "preserved" foods, and just hunt the rest along the way.

Now inside a village or a home, they just used a larder in much the same way we use a fridge. Depends on the area and size of the home/village, but some were "personal" and kinda the shape of a cabinet (usually in large homes), others would be very large, and meant to keep food for the entire village.

Also keep in mind that people had already leaned how to keep grains and what not. It's trivial to keep "flour" fresh when compared to bread, and while there were bakers, everyone could make "oat cakes".

It depends on the culture. Chances are its leaves

The closest thing I can think to aluminium foil is banana leaves, which were commonly used to wrap food and cook things. There's naturally local variations - some cultures have used palm or bamboo leaves. Sometimes they're woven or "stitched" with toothpicks.

Later on, paper might be a thing - waxed, oiled or otherwise processed to ensure its stability.

Since all these leaves which would be perfectly suited to act as the mideavel aluminum foil weren't available in i.e. Europe, waxed linen sheets were used. Either as a simple sheet or even as a bag to i.e. travel with a kilogram of flour on your back.

To make things last a little longer they often were put in a barrel full of salt (especially if uncooked meat had to be transported). I doubt that dry aging was an option as it wastes way to much of the meat and probably was quite dangerous to eat as the temperature control and hygiene wasn't as good as today.

Not the answer you're looking for? Browse other questions tagged storage history or ask your own question.

8
How the heck did people in the olden' days learn to beat eggs and other laborious tasks?
35
What was Indian food like before the arrival of the chili pepper from the Americas?