Why was my Quiche dry?

I was experimenting with Quiche in the kitchen this weekend. I didn't follow any specific recipe as I had watched serval on YouTube and felt it couldn't be too difficult. I was also making an individual size so a regular recipe would only have been a guide anyway.

The mixture was 2 eggs, 3 tablespoons heavy cream, shiitake mushrooms, shallots and Pancetta. I cooked just until the middle stopped wobbling like when I make crème brulee. When I cut into it, it seemed really dry and certainly not custardy. I used a butter and shortening crust.

Any suggestions on how to make the quiche have a more custard like texture? 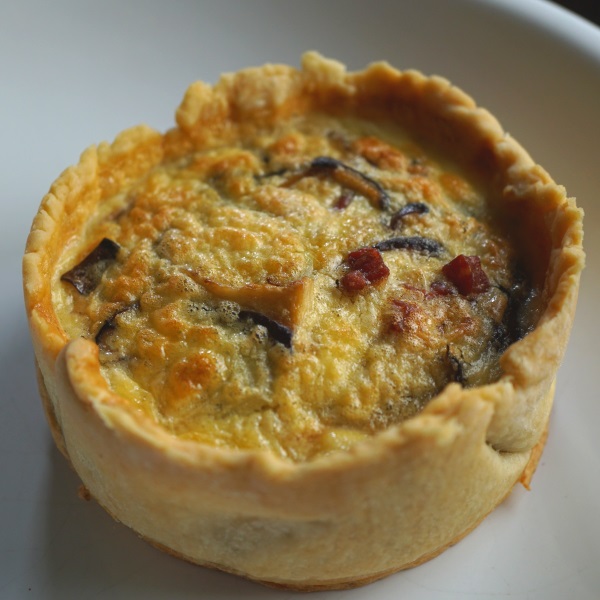 Honestly, it looks like it's just too high a percentage of egg... and maybe not enough cheese. I don't know that it can't work with that much egg but most of the recipes I've found just now use much more dairy to egg and have other ingredients to make them creamy.

For comparison purposes, you're using less than a quarter cup of liquid to two eggs or 1.5 tbsp/egg.

For example, this one on Food & Wine, uses 3 eggs and 1 cup half and half. It also has a cup of cheese and lots of other ingredients. The egg is clearly just a binder to hold things together. So, that's over 5 tbsp half and half per egg.

This one from food.com is closer to yours in ratio, with 5 eggs and only 3/4 cup milk but that's still over a quarter cup more liquid (12 tbsp instead of 7.5 tbsp per five eggs)... and it has you add two cups of other stuff, first suggestion being cheese.

I recommend adding more wet to your mixture to cut the egg.

Also, if you were baking at the traditional 350 F (175 C), you might lower your temperature a bit. Smaller things often do better with a slightly lower oven. This gives you more room for error. I bake mini-cupcakes at 325 F instead of 350 F for this very reason.

Sorry, that's a lot of different things to try... but since I don't know your oven temperature, that part is more of a guess.

I cooked just until the middle stopped wobbling like when I make crème brulee.

I agree with Catija's assessment that you probably need a higher dairy:egg ratio. Most of the quiche recipes in Julia Child's The Way to Cook call for three large eggs plus enough milk or cream to make 1 1/2 cups of custard, and I've found that to be pretty reliable.

However, I also think that you overcooked your quiche. If you cook a quiche (or a custard, or a cheesecake) until it stops wobbling in the center, it's bound to be overcooked by the time it's cool enough to eat. It's a harder to tell with small individual portions since they cool faster, but I'd still take them out while they've got a bit of jiggle left.

If you still have trouble getting the texture you want after increasing the dairy, try blending some cornstarch into the custard mixture. I'd start with 1 teaspoon and increase it a little bit if you like where that's going.

Not the answer you're looking for? Browse other questions tagged quiche or ask your own question.