I'm making a half white flour, half whole wheat flour bread, with garlic, olive oil and dried herbs. After kneading it for about 20 min I left it to rise even though it wasn't as springy as I'd like. It was also a bit sticky, but was afraid to make it too dry since I'm using high gluten flour and whole wheat which both need more water. After the first rise it still didn't feel springy enough, and I gave it another knead and let it rise again for 15 min. After this, and when shaping the bread, I noticed there are little holes in the dough as seen in the pictures. For some reason the gluten didn't fully form to which I attribute the little holes and tears to, but I can't think what to do different. Any ideas? 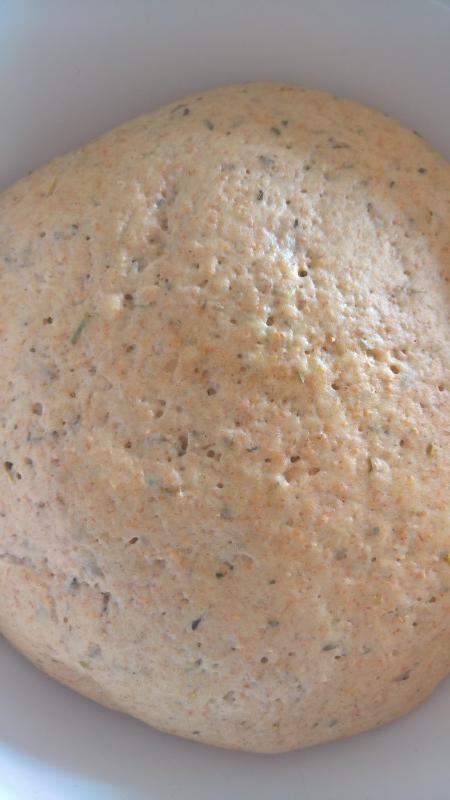 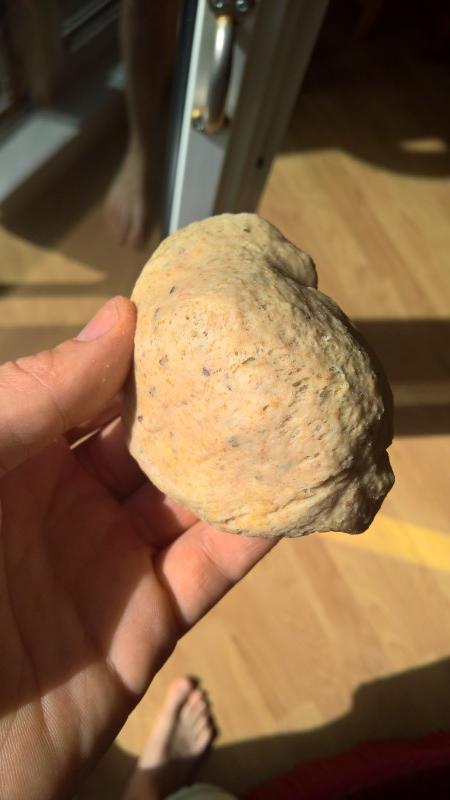 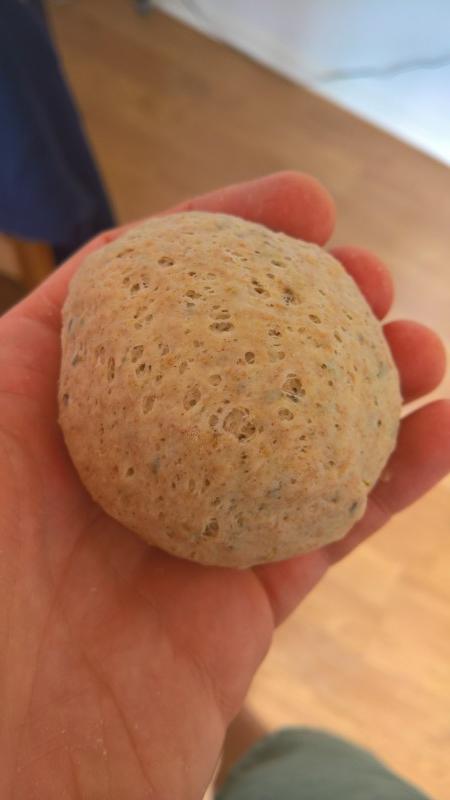 What kind of whole wheat flour are you using? An organic supermarket near me offers a mill to use on-site, and I once bought a package of wheat and milled it there, to see how bread tastes with unoxidized flour.

The roughly milled bran teared my gluten badly, and I had much difficulty getting the dough to perform well. The bread didn't rise well either.

Your dough looks rather irregular to me, and I believe to see tiny beige dots which may be bran. Adding all those spices doesn't help, neither does working with high gluten flour when you are using whole wheat. The whole thing looks like too much and too tight gluten to me, that gets torn by the bran and pulls together, leaving holes.

Also, home bakers tend to use too much yeast, and I suspect that getting the air pockets expand too quickly or even too much (overrising) increases the problem. Standard recipes start at 2% yeast (2 g fresh or 0.7 g instant per 100 g flour) but artisan breads use less, to allow for longer rising times.

So my advice would be:

Its hard to tell from the photos, but it looks dry. Dough will have holes like that and will tear easily if you make it too dry. If the exterior is dry, you also will need to make sure its covered well - I coat my dough in olive oil and put it in a bowl covered with plastic wrap. Another idea is to let it rise slower, large air pockets can form if you have it rising too quickly, like sitting under a lamp (this can also dry it out).

As a side note, whole wheat flour doesn't rise as well, won't be as soft, and won't stretch as well as white (AP) flour. I typically use about 1 part wheat to 2 parts AP when making whole wheat pizza dough to help the consistency.

Garlic, dried herbs, and the bran of whole wheat can all "poke holes" in your dough. You have gluten, but you also have a bunch of "knife equivalents" poking holes and cutting gluten strands.

You could pre-soak the dried stuff and whole wheat (for which you might call that an "autolyze" step) to soften them somewhat. And to some extent this is just going to happen, and is not the end of the world.

I believe that Lack of gluten development is the problem here. Whole wheat flour has less gluten then white flour. When using formulas that have a significant amount of WW flour you need to augment the amount of gluten by either using a high gluten flour or adding a gluten additive.

Autolyse will help ( make sure to not add the salt until after the autolyse period. Soaking the dried herbs in your water first will reduce their sharpness.

The gluten has to be developed sufficiently in the kneading stage, nothing can fix a lack of gluten dev in the proofing stage. Learn to do a window pane test with you dough as you knead.

Are you using a mixer or kneading by hand? My mixer will over heat a dough if i mix it until i have gluten dev, i always finish my knead by hand. Heat will impare or kill the yeast. Use cold water. There is a formula to account for friction factor ( the amount of heat produced by you mixer in the mixing processes ) but if you are careful and finish by hand it is not necessary and kneading by hand is better way to understand when the gluten is properly developed.

You said you used a high gluten flour, do you mean a bread flour with high gluten content or a flour that is specifically labeled high gluten? The higher the ratio of WW flour the W flour is will make it more difficult to get proper gluten dev. Sometime gluten additives are used in WW breads.

i would not change anything in the formula just yet ( make changes one variable at a time so you know what effect each change has ) and try another batch but hand knead the dough until you get the proper gluten dev you can see and feel with a window pane test. If you still are having problems the reduce the WW flour or use a gluten additive.

Not the answer you're looking for? Browse other questions tagged bread rising kneading or ask your own question.

11
Why doesn't my bread rise in the oven? (Not first rise)
17
Are there any negative effects to kneading bread dough longer?
4
Pulled noodle dough: how can you realign the gluten after a failed attempt to pull?
7
How do I make my sourdough bread dough stretchy and not have it tear?
4
Why won't my bread rise much during baking?
4
What would cause dough not to rise while making no-knead bread?
0
Sourdough dough collapsed, not rising again... Need help!
2
Overworking bread dough by hand
4
Bread dough flattens during final proof & almost no oven spring