I have been attempting to use coconut milk in both a curry and a rice recipe. I am aiming for a rich and smooth texture, but it keeps coming out bland and watery. Are there any particular methods of using coconut milk that I should be aware of? Does heating it for too long or too hot break down the flavor?

I used the following brand of coconut milk. 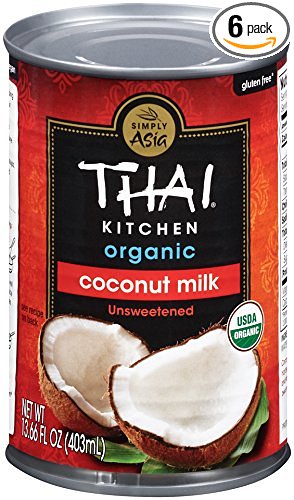 In a stock pot I heated the oil and added the curry paste, then the chicken. Then I added the entire can of coconut milk. Allowed it to reach boiling and then reduced to a simmer. I added the vegetables in and continued simmer for 40 minutes. I then added the fish sauce and sugar and served it.

First off, that probably isn't the best brand of coconut milk. I've never been that impressed, and Cook's Illustrated's review agrees, saying it was "too 'liquid-y' and 'thin'". They like Aroy-D, Roland, Goya and Chaokoh better as of May 2017.

But on top of that, you probably got a lot of water from the eggplant. It's mostly water, and it releases plenty of it as cooking breaks down the structure.

I might try stir-frying the eggplant first, or roasting if you prefer, then adding it to the curry at the end. That way the liquid will be pretty much just coconut milk.

If it still seems too watery, you could do the same for other ingredients. Chicken breasts can release some water, and peppers too, but nowhere near what you get from eggplant. This does let you make sure they're cooked exactly as much as you want, so you might like it regardless of the watery issue.

You can also always just add more curry paste. Often the ratios suggested on storebought curry paste yield a less flavorful curry than what you probably get in restaurants.

To answer your side questions: long cooking is fine, and you don't have to do anything special to coconut milk to make it work.

Coconut milk is wrung from grated and soaked coconut meat; it's not the liquid inside the coconut (nowadays marketed as "coconut water").

Coconut milks differ in the amount of water added. More water correlates with less richness. If the milk is overly watered down, e.g., in 'light' coconut milks, the manufacturer may compensate for the thin texture by adding stabilizers, thickeners, or emulsifiers. I avoid watery milks, not only because there's less coconut there, but also because the texture feels wrong, even with -- or because of -- additives (which can also affect the flavor). It's still possible to buy coconut milks that contain just coconut and water. My personal favorite is Aroy-D.

One quick and dirty way to compare the richness in different brands of (unsweetened) coconut milk is to calculate the calories per ounce (not per serving).

The richest possible coconut milk is called coconut cream which should have no added water.

Not the answer you're looking for? Browse other questions tagged coconut thai-cuisine or ask your own question.

8
Cracking coconut cream
24
How do I prevent coconut milk from separating in Thai curry?
10
Thai curry cooking
4
Flat Thai Panaeng Curry
7
Homemade Coconut Yogurt Turned Yellow on Top Overnight
8
What is this paste I got from boiling down coconut "whey"?
7
Thai Curry seems more watery over the last year?
14
When should I add curry paste?