How to grill without an actual grill

Clarification: The term "grill" is used here with the US-based term for grilling, which may differ from other countries such as Great Britain and Australia, where it is typically called a "barbecue"; Ideally it is a direct flame against one side of the food at a time, though other heat sources are not out of scope.

I live in an apartment complex where it is hugely impractical (if not impossible) to own a full-size grill. Despite this, I really want the ability to grill small amounts of meat and vegetables without too much hassle. Two possible solutions occurred to me, but I'm not sure which would be better or if there's a third option I'm unaware of:

Are either of those actually good options? Is there a better way that I haven't thought of? I know there are also miniature charcoal grills but they don't seem to be nearly as portable or space efficient as the other two.*

Edit: Advice in the answers/comments has led me to order a smokeless stovetop grill, because they're so cheap and allegedly pretty good there's no reason not to try it out. This is the one I decided on. In a couple days it should be here and I'll give it a thorough test and report back.

Keep the advice coming! It seems there are several other good options, so I want to float as many of them as possible for future viewers to reference.

* As for an outdoor solution: it's somewhat restricted in my area, you're allowed to have them but they must remain unconnected to a fuel source if they're within 25' of the building. That's one big reason I'm interested in indoor solutions, though I can compromise if a charcoal option seems like the way to go.

Conclusion: The stovetop smokeless grill worked out great. It's not a perfect replacement for a real grill but for such a cheap pricepoint and for its ease of use, it provides very satisfying results. The only things you need to watch out for are the fact that it doesn't cook evenly, so you have to rotate your food at least once, and it doesn't burn away oil and fats like a normal grill, though it does drain a fair amount of them; basically just go very light on the oil or you'll end up with a greasy mess.

Thanks for the suggestions, everyone!

Another consideration is that some apartment complexes have restrictions on what type of grills can be used because of fire hazards. Where we lived many years ago we were not allowed to use charcoal or gas.

So, there are a couple of options. First would be a smaller than full size electric grill. There are many available in different shapes and sizes. Some can be used both indoors and outdoors.

This is similar to the one we had. It has a small footprint and works well where there is limited space. But there are also many small table-top models available. 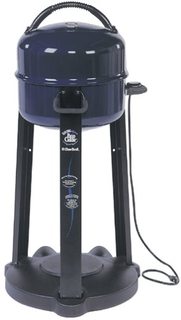 Another option is a smokeless indoor stove top grill. This is closer to actual grilling than a grill pan and actually works better than it looks like it would. I have one that we have used for years anytime outdoor grilling has not been an option. Most are very reasonably priced and work well on both gas and electric stoves. And using two (or more) is always an option. 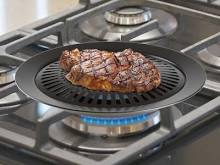 The grill pans are, as others have mentioned, a disappointment on top of the stove.

On the other hand, using a cast iron grill pan with the broiler is an effective combination. Adjust your oven rack to it's highest position, put your grill pan in empty and turn your broiler on high. Using a good hot pad/glove (I prefer the glove or mitten) pull out the pan, add your meat and set it back in the oven. Give that a few minutes to cook, pull it out, flip it and go again. Pre-heating the cast iron is key. Raising the meat up off the surface allow the air to circulate and give you as close to a 'real grill' flavor as you can get, and classic grill marks to boot.

A couple of 'gotchas' to look out for: 1. If you have some type of handle cover for your cast iron (silicon) remove it when doing this. 2. Watch for flare ups, if your meat has a decent measure of fat, it can render and catch fire...not a big fire, hit it with a squirt bottle, just like you would a real grill.

Here are a couple of articles that go into a bit more depth for you: http://www.thekitchn.com/how-to-broil-a-steak-in-the-ov-42896

This one also shows building an indoor smoker, but I've never tried. https://www.epicurious.com/archive/holidays/grilling/how-to-grill-without-a-grill

When you say you want a grill, all your examples are actually more like barbecues. Which were you looking for?

If you only need a grill, a George Foreman grill is one solution. It presses the food down, so there are some things it simply cannot do properly, such as cheese toast. It's OK for grilling meat though. Definitely buy one with removable grill panels - the ones with fixed panels are very hard to keep clean.

Combi microwaves can include a grill, like this Bosch example. This can give you the best of both worlds - quick microwave cooking, with a crisped/browned outside.

And with the same footprint as a microwave, you can also get countertop ovens which can grill as well. This Igenix countertop oven for example includes electric hotplates on the top too.

When I was in college I got a Coleman camp grill as a gift and it was fantastic. I used it through college and for the first 5 or so years once I moved into my own home before buying a full sized grill. Still use it for camping.

This looks like it's the updated version of what I have: https://www.amazon.com/Coleman-Camp-Propane-Grill-Stove/dp/B000W4VD8C/

If you want something that gives you more of a real grill feel, a friend of ours has a Coleman Road Trip Grill. They bring it to picnics and events like that and it seems to be a nice product.: https://www.amazon.com/Coleman-9949-750-Road-Trip-Grill/dp/B0009V1BDA/

You couldn't use either indoors, but both are portable and easy to get in and out of an apartment.

My experience with the same conflict has leads me to feel that the portable propane grill is the best option. These absolutely do cook just as well as a full size grill, and you can even get an adapter for a full size propane tank if you want. Id recommend against a george foreman grill or stovetop grills, as my experience is that those dont produce the same flavor and texture.

2 Cheap ways to grill and without a bought actual grill.

A) In the city or in a town: If you are in the city or in a town, then you obviously can not make a bonfire. So then what you could do is if you have an old concrete building tube you could use it as the wall of the grill. On the top of the concrete building tube put a stove grill, and on that grill you can grill your food. You could use coal or wood exactly like a normal bought grill to burn in your grill. But this grill is pretty much for free.

B) In the city or in a town: This one is the same as no. 2 but with a difference that you use some old bricks instead of concrete tubing. You simply build a square brick shaped wall so that you get a hole about 50cm or more in the middle. See to it that the bricks are not stacked exactly on top of each other but stacked in a staircase order exactly as if you were building a house. And on the top of these bricks you put the stove grill where you grill you food. You can use coal or wood as a normal grill for this grill too. NOTE: Do not make your grill out of stone bricks, because they could explode.

How well it is made it is of key importance behind any self made grill.

CONSTRUCTION simplified blueprint for a brick home made grill: http://amazingribs.com/images/pix/Hog_Pit_RGB.jpg

NOTE: My grandfather use to build all his life brick stoves in his time for many towns in Romania. Although stoves and grills are not the same thing, they are pretty much similar when we talk about wood heated stoves. He thought me some of his ideas, that is why I know how to build them or grills too, the same technique is applied, but grills are more simple then stoves.

Not the answer you're looking for? Browse other questions tagged grilling electric-stoves or ask your own question.

3
Do different wood types work better for grilling different meats/fishes?
6
Grilling long beans, and a substitute for cooking twine
13
Cooking steak on the grill
7
Juice from meat extinguishing charcoals when grilling?
1
Should I press the chicken breast against the pan when I grill it?
4
Gas grill compared to regular (high end) oven
1
Ways to prevent smoke when grilling
8
Cook with no hood - how to control smell
0
Can I use this air fryer basket with a non-stick coating as a grill basket?
4
Grilling on an iron fire pit