I have purchased Safa raw honey. They have written that their honey is:

This honey is runny and dark in colour (almost black). It has some residue in it.

Have I been fooled? Can raw honey look dark and runny?

All the "raw" means is that it was extracted from the honeycomb without significant heating. It's liquid to start with in the honeycomb, so it's normal for it to still be liquid when you get it. I don't know if I'd call it runny, it should still generally be a pretty thick, slow-flowing liquid, but it's not a paste.

The color is mostly just a function of what the bees were gathering. Dark is often more flavorful, probably a good thing, but depends on your tastes. Mass-produced honey is very often lighter, and wildflower honey (where the bees just get whatever they want) is very often darker.

I've definitely seen plenty of raw, unfiltered honey that looks liquid and roughly the darkness of the raw honey you bought, judging by the picture in the linked page. If anything, it's probably more common to find dark unfiltered honey, because the filtering can lighten it up a bit.

The "paste" you linked to looks like it's crystallized/creamed. There are a lot of tiny sugar crystals, making it thicker and opaque, which tends to make it look a bit lighter too. (It's not completely smooth, like "perfect" creamed honey, but it's a lot smoother than uncontrolled crystallization, so I think it's fair to call it creamed.) Raw, unfiltered honey does crystallize more easily, because it has more imperfections in it to jump-start crystallization, so it's not entirely surprising to see raw honey in that form. But raw honey certainly doesn't have to be that way.

Honey can range from light to very dark; from what I have in stock at the moment 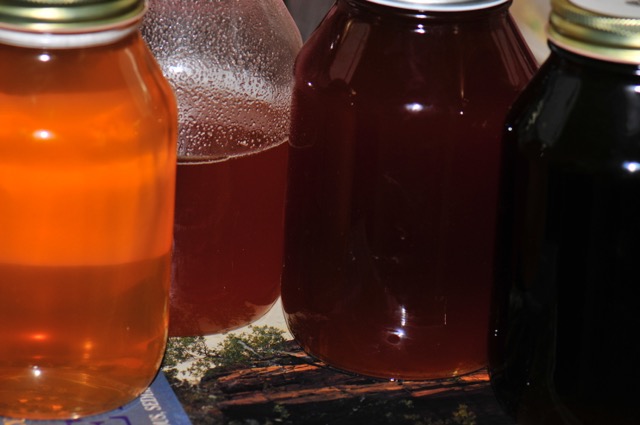 one may be able to see that the rightmost trends towards almost black. These samples are all from bees in the pacific northwest area.

It seems the further into the tropics you go the thinner honey gets. Dark honey normally has more pollen in it. So what flowers did it come from? But black honey I have not seen. Dark brown yes. If set does some bees wax form in the honey? Is there parts of bees in the honey? Unfiltered is not normal. Taste varies from week to week when fresh honey is bought. Or hive to hive in honey. Our honey they get a hive. Put it in a 5 gal. bucket. & the boys walk down the street selling it. You stick your finger in & taste it before buying. Bring your own jar. The comb is mashed &the honey filtered threw a cotton cloth into your jar. Some wax is seen in the honey. Light to dark brown in color. Not to many particals in it. Some wax. It almost sounds like you bought cooking honey. We normally use the dark honey in cooking.

Not the answer you're looking for? Browse other questions tagged honey raw or ask your own question.

9
Is raw honey safe to consume?
5
How to extract raw honey from honeycomb?
0
What is the difference between wildflower honey and Acacia honey?
3
Why is "raw" honey thicker than the one you buy in regular super markets?
15
What can cause honey to crystalize quickly?
2
Does raw honey need to be prepared before consumption?
1
Is 'honey in crystallized form' the same as 'raw honey'?
0
Why is honey and mustard mixed together runny?