I have never known there to be a difference, until stumbling upon Papa John's extras menu where pepperoncini is listed separately from banana peppers.

When shopping, usually I find the names to be interchangeable. For example, if you go to Subway here in the US and ask for pepperoncini or banana peppers, the sandwich maker will grab the same vegetable.

What is the difference then, if there is any?

I find them to be quite different, actually.

The pickled banana peppers you find at sandwich and salad bars are usually cut in rings. They have a sour but quite sweet flavor that I like a lot. I don't usually define these as being "hot" at all. They have thicker flesh than pepperoncinis. 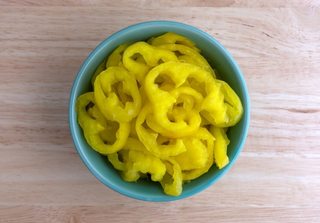 I could eat these things all day. They have a really pronounced flavor, too, that often overpower any other flavors in a dish.

On the other side, you have pepperoncinis... These I also will eat but I don't find them to be nearly as sweet as banana peppers. They also seem to be more bitter. I nearly always find them served whole, often in a salad (as you find at Olive Garden) or with a pizza. 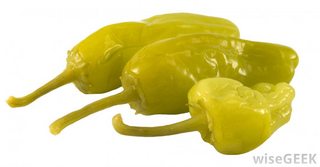 The descriptions of them here seem to corroborate my feelings:

My guess is that Subway only has one or the other (banana peppers, it's pretty obvious to me and what they also say on their website) but they know that people tend to use the terms interchangeably, so they don't argue with you when you ask them for "pepperoncini" and all they have are banana peppers. They reach for "the same vegetable" because they only have the one.

Papa Johns offers both, which is why they have both on the menu. If you ask for one pizza with one half with one and the other half with the other, you will get two different things... though based on their website, you can get banana peppers as a topping while you get pepperoncini as an "extra" meaning it's not cooked onto the pizza, it's served on the side. If you asked, they'd likely be willing to do put the pepperoncini on the pizza but it's not their standard practice.

Possibly worth noting that I'm pretty sensitive to bitter flavors, which may explain why I can tell more of a difference between the two.

There isn't much of a difference really, they are distinct varieties but they look very similar, taste very similar and have a similar heat level so you'd be forgiven for thinking they are the same. Pepperoncini peppers are slightly hotter than banana peppers overall and you can tell them apart - pepperoncinis are wrinklier than banana peppers, which have pointier ends.

5
Should chili peppers be seared?
1
Can dried peppers get hotter with aging?
5
What preparation is done to banana peppers?
4
Do more peppers mean more heat?
6
preserving hot peppers without damaging heat
6
Roasting smaller, thinly skinned peppers - removing peel
2
What kind of chili peppers are these?
4
How should I substitute jalapeño peppers for fresh green cayenne peppers?
5
Can fresh Poblano peppers be used raw?