Loved my tramontina 3 piece induction system from Costco until this happened. Was boiling some eggs as I do every morning and had done for 9 days in a row with this system. This morning I might have had the temperature a little higher but not much more. When the water came to a rolling boil I put 2 eggs in. When it was time to pull them out I shut off the cooktop and went to pull off the lid, but I couldn't because it was stuck. I thought that maybe it needed to cool down so I left it alone now 12 hours. However the lid is still stuck to the pot. I do not wish to force it. I have even held it upside down as pictured. 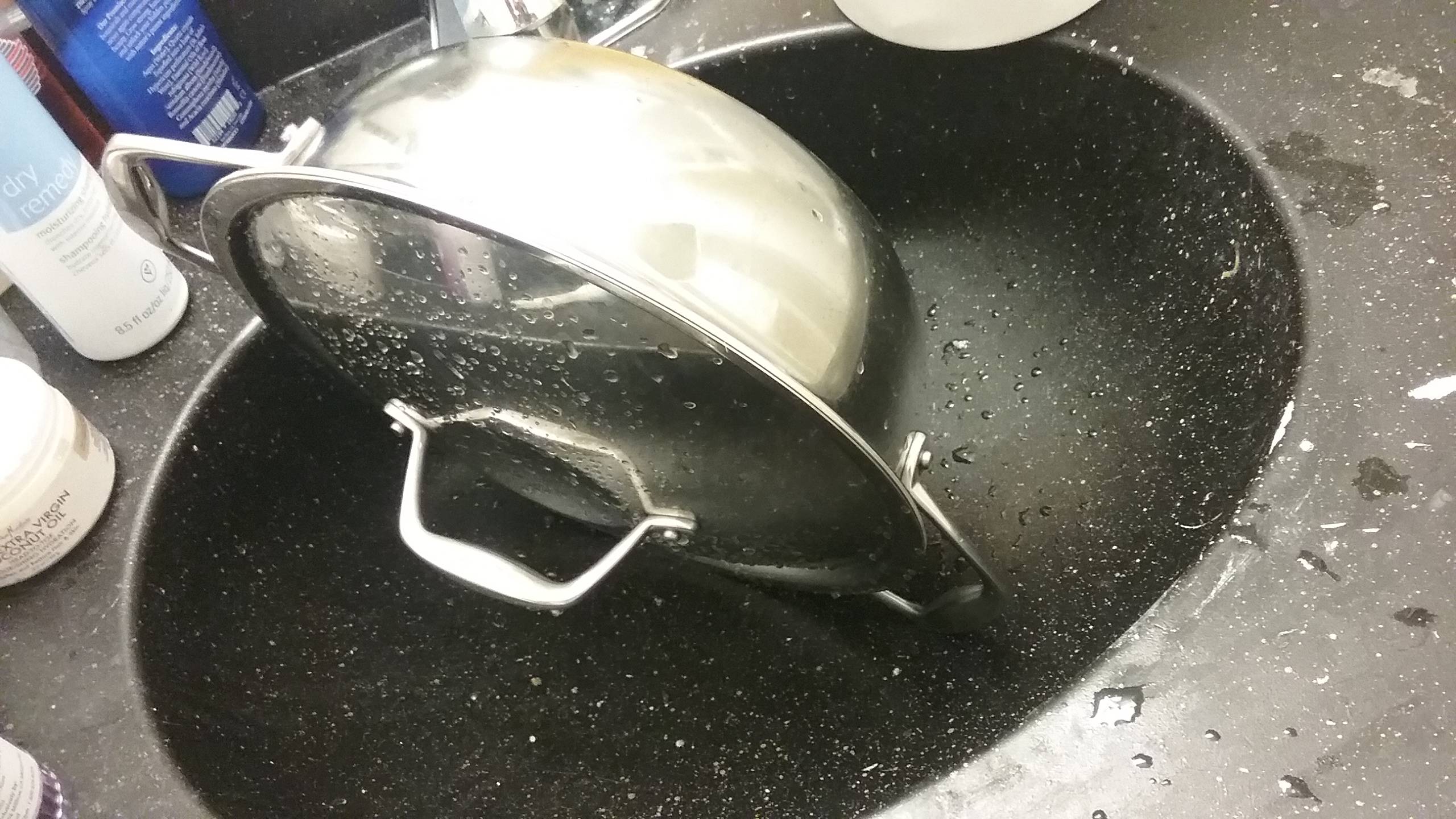 It seems really unlikely it somehow rusted shut or anything like that while you were boiling, so it seems most likely that there's just a partial vacuum inside. While boiling, it'd have been full of hot air and steam, and now that's all cooled down, and the steam has condensed, so it could shrink down you end up with low pressure inside sucking the lid down. It's a bit surprising that the seal is good enough to hold the pressure for this long, though!

In any case, if that's it, assuming there's still liquid in it, I'd try just heating it again. That would increase the pressure inside, hopefully back up to normal, enough to let you get the lid off. I'd also try twisting and angling it, because if that's it, all you need is a tiny opening to equalize pressure.

If this does turn out to have been the issue, you could probably avoid it in the future by opening the lid immediately when it's done.

I found an easy way to get the lid off after it happened to me with a pot of brown rice. I had set a timer, so I was pretty sure there wasn't any water left in the pot which made me reluctant to heat it back up. Instead I boiled a different pot of water and set the stuck pot on top of it. Within a couple of minutes the top released without any problems or noise.

Just had my first experience using this product and trapped my dinner. I did not burn my kitchen down but the thought did come up. I thumped the pot edge in a stainless sink till the vacuum was broken.

Customer Service did say to heat it up but when the trapped item inside is burning this seems dangerous to me.

We have this pot and have had the lid stick every time we use it. I'm thinking; drill a small hole in the lid. Have used a small thin knife to open the lid before but have almost stabbed myself doing it that way. Can't believe this problem hasn't been corrected by COSTCO.

Carefully slide a single edge razor blade inbetween the lid and pot and it will release.

Not the answer you're looking for? Browse other questions tagged cookware pot induction lid or ask your own question.

1
What to look for in a pot?
6
sauce pan vs. dutch oven vs. stock pot - any difference besides size?
18
Why not cover the pot?
3
Pot sticking to induction cooktop
1
enamelled pot with a chip on the outside on the bottom
2
When are pot lids useful?
2
Simmering with or without the lid
2
I was able to cook on an induction stove with a non-magnetic pot, why?
1
Why this cooking pot not working on my Induction?
2
Aside from saving gas or electricity, why cover the pot?