How to interpret this recipe for walnuts harvested at a given time?

I have the recipe for a liqueur which requires using

walnuts harvested around the 21st of June.

(Yes, the walnuts have to be far from ripe. The recipe call for green walnuts having no hardened shell yet)

The recipe came from the South of Europe (40°N), but now I want to use it with walnuts grown in northern Europe (51°N).

How can I adapt the harvesting time to keep a fairly similar development stage of the walnut?

I wouldn't get too hung up on such a specific date. The date given is likely because of it's proximity to Midsummer's Day celebrations. In Italy and France the harvesting of green walnuts was traditionally tied with St. John's Day.

The keys for harvesting green walnuts are:

The only issue I could see with harvesting too early was that the size of the nut may be too small. Harvest too late and the wooden shell will start to form.

You'll probably have a window of about 6 weeks to find green walnuts that fit the conditions above. If you have your own tree you have the benefit of being able to see the nuts as they grow and mature. Otherwise you could try asking your produce provider when they usually have green walnuts to get a good idea of what dates are common in your area. I'm guessing to closely match the recipe you'll want to be on the early side of that 6 week period.

I am afraid that you cannot do such a calculation in general. Degrees northern latitude is responsible for only a fraction of climate variation and walnut growing conditions. The author of the recipe didn't realize that his recipe relied on localized knowledge which other people will not have, and did not think to make it followable outside of his context. Really, you can have two villages 20 km apart and the walnuts in one will ripe a week earlier than the other.

The best guess you can do is to say that this is probably about using unripe walnuts. I have a hard time imagining a place in Europe at 40°N where the walnuts are ripe in the end of June. But the exactitude of the recipe means that the author is probably aiming at a specific stage of the walnut fruit growth. If you just go for any green walnut, it may turn out that it has too hard a shell already, or still too much of the sponge tissue around the kernel, or any number of other things which are not right.

You are left with three options here. One is, just try the recipe with whatever walnuts you can find (it will probably be difficult to get any unripe walnuts in Northern Europe anyway, unless you have access to a tree) and see if you like it enough to eat it. Second, start systematic experimentation. Repeat the recipe many times with walnuts picked on different days in your vicinity, record the results and see which one corresponds best to your expectations (or memories). Third, travel to the original location around 21st June and pick walnuts there, to see for yourself what the proper stage of walnut development looks like.

All of this is lots of work, with a tradeoff between effort and probability of success. But I am afraid it will fall on you. Nobody else can give you a good estimate based only on generic information.

Interesting concept. Since I never ever heard of using green walnuts for anything, I looked this up on the inter-webs, and lo & behold:

I have no idea if this is anything close to what you are talking about, but on that page, there is a picture showing in pretty clear detail the exact state of development of the walnuts for this particular drink: 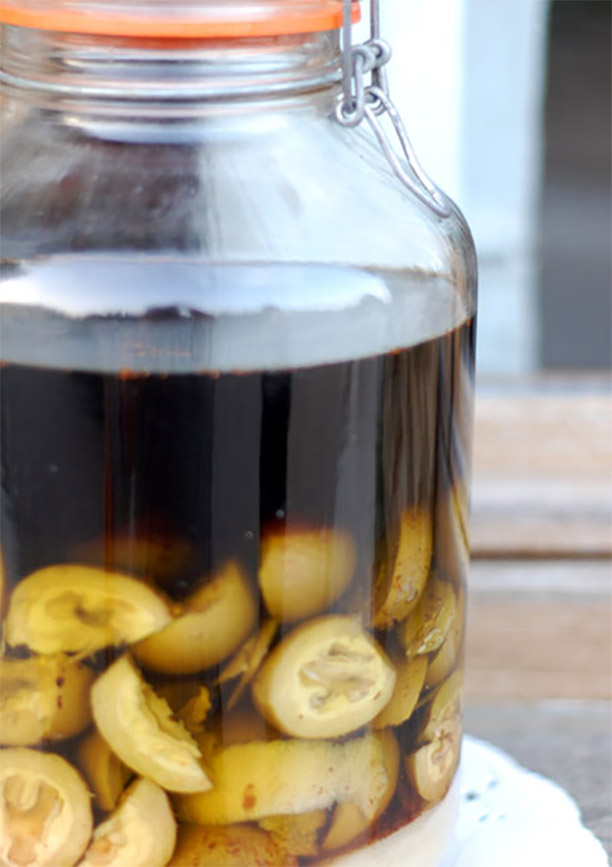 If you use the name of your liqueur, and/or its country of origin, maybe you can find similar info for your exact recipe.

I've been making nocino, the infusion you're talking about, nearly every year for the last decade. Being at around 42˚N, I've wondered the same thing with regard to ripeness and location.

After some experimentation, I continue to pick them in the night of the 23rd of June or morning of the 24th. (In my understanding that is the traditional time -- it's the feast of Saint John. I've also decided to stick with the traditional 40 days of steeping.)

I have tried picking them at various later times, between a week and three, and been disappointed. (Unfortunately I've never been quite organized enough to get several batches in one year, so this isn't completely "scientific" data collection -- there's obviously confounding factors.) The flavor of nocino, when it's good, has tannins and bitterness balanced by woody flavor and some very bright, spicy and citrusy notes. Walnuts harvested too late are notably lacking the latter, and the result is flat and medicinal in an unpleasant way.

The best thing to do would be to observe the state of the walnuts yourself, if you have ready access to a walnut tree. It's easy to tell that they are going to be flavorful when steeped. Pulled right off the tree, the nuts will have a large amount of aromatic oil in their skins. Scratching the surface should release a burst of a lovely piney and citrusy smell. If that's lacking, it's too late. Cutting one open (be aware -- the juice from black walnuts will stain your hands and cutting surface), it should be around the hardness of balsa wood, with a consistent creamy color throughout, and a barely-visible "embryo" of the nutmeat in the middle (usually with some indentations in the very center). If the inner nut is clearly formed and distinguished from the rest of the interior, you're going to end up with a very bitter drink indeed.

I imagine that, wherever you are, you'll find that the walnuts meet the criteria right around the same June date, and so ultimately I'd recommend planning on harvesting sometime that week.

One other strong recommendation I should make is to get the walnuts into their steeping liquid as soon as possible after harvest. Ideally immediately. That spicy oil disappears very quickly, even tightly covered in the fridge.*

Two other tips: I've found that putting the jar out in strong, direct sunshine (if available) for the first two or three days makes a substantial positive difference in the extraction of the bright flavors that you want. Additionally, even though you take it off the walnuts after 40 days, letting it continue to mellow in a cool place for a few months does good things to the tannic element.

As a final fun addendum, if you have other nuts native to your area, you might try them when they're in a similar ripeness. I once tried hickory, with fairly good results.

*My batch two years ago was a disappointment because of the picked nuts spending a day in the fridge, despite using a tree that I knew produced very flavorful nuts.

Not the answer you're looking for? Browse other questions tagged liqueur or ask your own question.