Can I use cooking sherry instead of red wine in my stew?

If it matters, the meat will probably be lamb or beef.

The cooking wine in question: 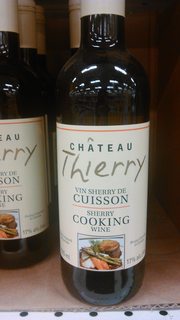 "Cooking wine" is unfortunately ubiquitous on US mega-mart shelves. It is notoriously bad. I mean really, really notoriously bad. It starts bad, and then they add obscene amounts of salt so that it can be sold on grocery store shelves for $6. As pointed out by @Malvolio, "salted wine is supposed to be disgusting! Many US states have special licensing requirements for any store that wants to sell alcohol, even wine and beer, but wine that is so heavily salted it cannot reasonably be consumed directly is exempt." The salt literally makes it undrinkable, so underage and other sales that would otherwise be illegal aren't an issue. The added salt also ups the shelf life, but not nearly enough to justify the sensory assault of these stunningly awful "wines". Canadian "cooking wine" is the same thing, just with different levels of salt just like the 50 states.

(these are just examples, all "cooking wine" brands on US grocery store shelves are the same level of truly insulting): 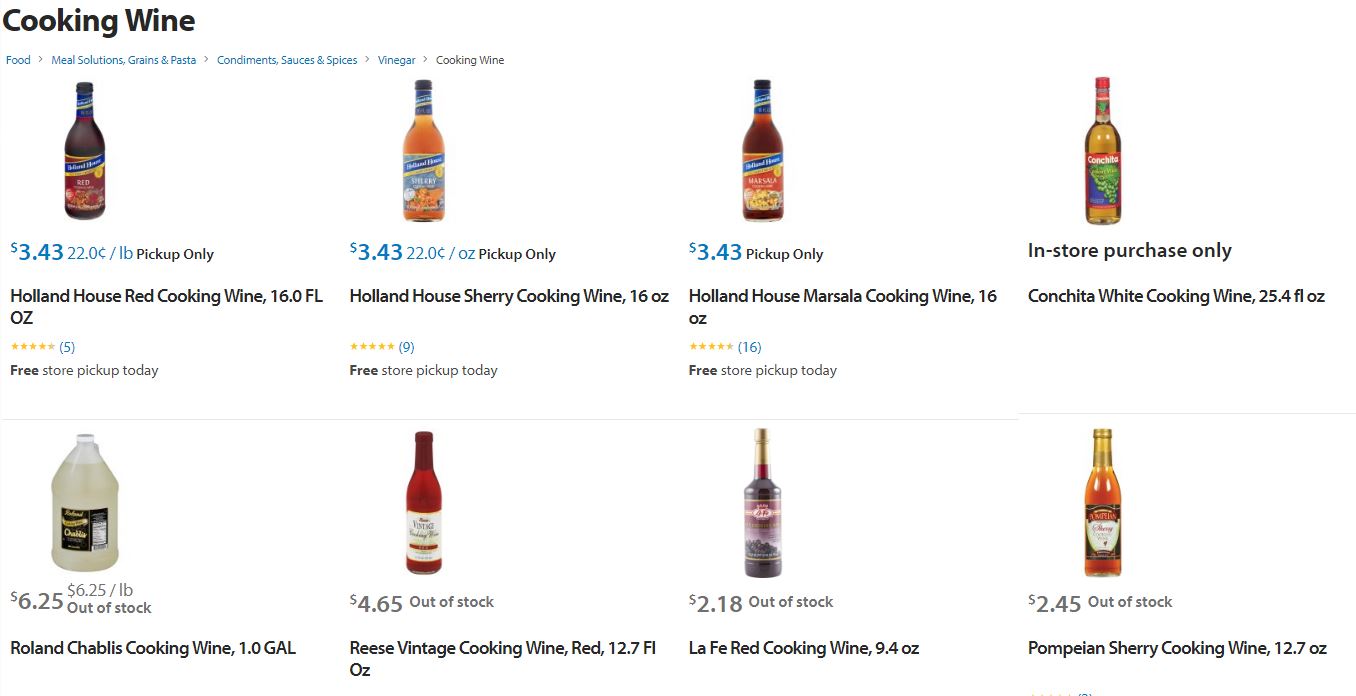 Skip the cooking wine. Go to a liquor store and look at the inexpensive bottles of wine. You might be surprised - bargains abound.

Incidentally, if you don't generally love to drink wine but occasionally like to cook with it, you might try what I do. I keep a bottle of inexpensive but good dry sherry and another bottle of inexpensive but good dry vermouth tightly capped in the fridge. Those wines, along with marsala, port, and others are fortified with liquor, giving them a much longer refrigerated-after-open shelf life than normal wine. Fortified wine can often replace the wine in recipes, at an equal or slightly reduced volume of the non-fortified wine called for. Sherry is often actually called for in Chinese and other Asian recipes, and dry vermouth can generally sub for "dry white wine" in recipes.

Our recipes often call for dry white wine. Its crisp acidity and lightly fruity flavor add depth to everything from pan sauces and pasta to risotto and steamed mussels. The problem? Standard wine bottles are 750 milliliters, and our recipes rarely call for more than 1 cup (roughly 235 milliliters) of wine. That leaves us with most of a bottle to finish in a matter of days. Dry vermouth, which can be substituted for white wine in equal amounts in recipes, is a convenient alternative. Like Marsala and sherry, vermouth is wine that’s been fortified with a high-proof alcohol (often brandy), which raises its alcohol content and allows to it be stored in the refrigerator for weeks or even months after opening.

I buy the dry vermouth recommended as the best buy by those same folks at Cook's Illustrated/America's Test Kitchen, which sells for $6-$8 in the liquor store that connects to the grocery store (barely more expensive than the hideous salt bomb on the grocery store shelf).

One of the Sherries recommended by the Cook's Illustrated taste test clocked in at under $6:

Another option is to freeze wine - buy a bottle, use what you need this time and freeze the rest in containers of about a cup. Red doesn't freeze completely solid so keep the containers the right way up in the freezer.

This is also good if you've drunk some of a bottle and know you won't finish it.

Some cheap drinking wine is good for cooking, such as rather rough reds in a stew. Here in the UK, salted cooking wine does exist and has reduced alcohol but is very rarely used.

I've been known to use (a smaller quantity of) port in place of red, but it can be a little sweet, so some adjustment is needed.

I'd suggest buying something like Franzia -- a box of wine with a bladder so that air can't get in. They last in the fridge for a few months, so you can use it as a supply for cooking wine for a while. And its OK (not great) to drink as well.

As it has been noted time and time again, you can cook with wine that you wouldn't enjoy drinking just fine. Ideally you want a drier wine so that the sweetness doesn't become cloying.

Here are the Serious Eats guidelines:

One last tip: Boxed wine will give you some of the best bang for your buck when it comes to cooking wine, and, even more importantly, it gives you the most flexibility, since you can use as small an amount as you want without worrying about having to finish the rest of the box before it goes bad (boxed wines have an internal plastic bag that prevents any leftover wine from coming in contact with air, greatly increasing its useful shelf life). It's what I keep in my kitchen for cooking, and encourage you to do the same.

Also, for completeness, see this article on substituting fortified wines for regular ones. You can make it work in a decent number of cases, and fortified wines can last longer. You just need to be careful with what you're doing.

I would not recommend using cooking wine. The quality is horrible and, I think, there's usually stuff like added salt.

There are actually middling to decent regular wines that you can get for at or under $6.

When I'm making a beef stew, I always use a Pinot Noir (not fruity sweet, but not overpowering tannin or oak, either). Barefoot is a serviceable brand that I have used that usually comes in at around $5 a bottle.

If that's too low-class for you, most, if not all wine stores will have labels on the shelves for ones that get decent ratings from wine magazines. Find the cheapest one with rating notable enough that they put the tag on the shelf next to it, and you should be fine.

If you're worried about wasting the excess, vs cooking wine that is more shelf stable, I'd recommend a one time purchase of a Vacu-Vin. It's basically a rubber stopper and a hand pump that draws all air out of a partially used bottle, preventing the wine from interacting with air and changing. Typical starter package includes the pump and two or three stoppers, with additional packages of just the stoppers available.

It is also handy for wines you actually drink, if you don't have enough friends or personal determination to kill a bottle at one sitting.

Sherry is VERY different from red wine – way sweeter, much less bold, just a completely different flavor. It's a good accent flavor for a bisque or something but it would be crazy overpowering and not at all delicious in a beef/lamb stew. The good news though is you can definitely use cheap wine in your stew. Go buy a bottle of yellow tail Cab or equivalent – you don't need to spend a lot (and, in fact, the flavor nuances will likely get lost) to get the right flavor.

To quote the late, great Keith Floyd (an expert on both cooking and wine, and an enthusiastic consumer of wine) - "If you wouldn't drink it, for God's sake don't cook with it."

Not the answer you're looking for? Browse other questions tagged substitutions beef wine stews lamb or ask your own question.

23
What defines cooking wine?
9
Are vacuum pump effective to improve wine conservation?
2
How long can I store open wine for cooking?

6
What can I use instead of corn syrup?
4
Why does my red wine reduction go 'grainy'?
3
What can I use in place of sherry in a recipe with king prawns, garlic and paprika?
7
Will swapping the red wine in my spaghetti bolognese with port wreck the dish?
34
Why do American supermarkets only carry lamb and not mutton?
12
Can I freeze beef stew?
6
Beef Bourguignon Wine Question
1
What wine(s) would you substitute for sweet red vermouth?
0
Veal and peppers
0
Why does my chopped beef come out too tough?